(Minghui.org) “I want more people to know about this, so I will sign the petition,” said Sheree Pearson, a Sydney resident, about the state-sanctioned organ harvesting taking place in China. “I hope that more people will do something to help stop it.”

Sheree stopped when she saw Falun Gong practitioners asking for signatures in downtown Chatswood on November 21. She not only signed the petition, she then started asking passersby to sign, letting them know that their signatures would help stop the Chinese government's heinous practice. 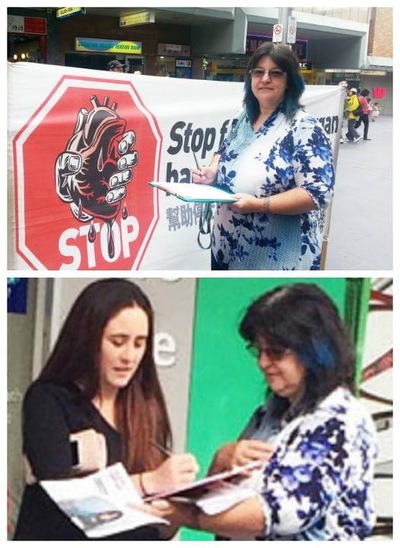 Sheree Pearson (top) asking a passerby to sign the petition

Sheree had read about the 16-year long persecution of Falun Gong on social media but was horrified to learn about the practice of killing practitioners and then harvesting their organs.

“What you are doing is amazing,” she said to the practitioners. “All you want to do is to practice a peaceful and relaxing meditation full of positive energy, but the government in China is suppressing you. It is unbelievable.

“We must let more people know about this crime of forced organ harvesting and help stop it,” she added. 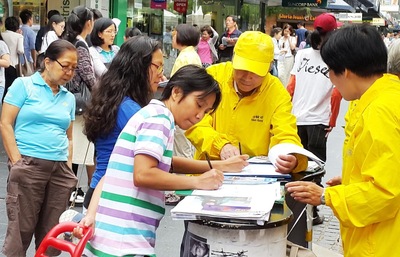 Salvia (left) and her daughters Rayna and Canbice from the Philippines sign a petition to support Falun Gong.

Salvia and her daughters Rayna and Canbice from the Philippines were concerned about the persecution. They were impressed to learn that nearly 200,000 Falun Gong practitioners have filed lawsuits against the former Chinese dictator for his role in the persecution. 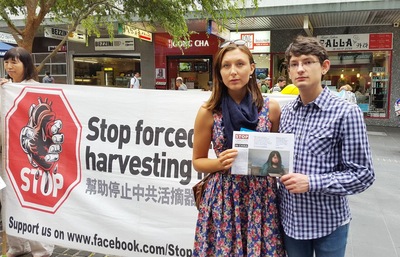 Cassie Hubrich and her boyfriend Joel Pearson promised to spread awareness about the persecution of Falun Gong on social media.

Cassie Hubrich and her boyfriend Joel Pearson had never heard about forced live organ harvesting before and were saddened by it. “Why doesn't our government help stop it?” They told practitioners that they would share this information on social media and encourage more people to help.