(Minghui.org) The domestic security police from Bazhong City recently collaborated with local authorities to harass or arrest 34 Falun Gong practitioners who had filed criminal complaints against past dictator Jiang Zemin.

Jiang had initiated the persecution of Falun Gong in 1999 and has sustained it through officials he put in place throughout China. Filing criminal complaints or lawsuits against Jiang is legal under Chinese law.

The head of the Zhuangyuanqiao Community Office led a group of officers from Jiangbei Police Station into Ms. Fu Anzhen's home without consent or a warrant on August 27, 2015. Only her eight-year-old granddaughter was at home. They tricked the girl to open the door and then ransacked the home. The police took away Falun Gong books, computers, and other personal belongings.

Ms. Fu later went to the Jiangbei Police Station for her belongings and warned the police that it is a crime to break into a citizen's home without a warrant. The police did not show any regret for their crime. Instead, they arrested Ms. Fu and forced her children to pay a fine.

Suo Guoyong, a deputy chief of the Bazhou District Police Department, headed a group of officers who broke into the home of practitioner Mr. Wu Yinghao on August 27. They charged Mr. Wu with helping others to write their criminal complaints against Jiang Zemin.

The police arrested three practitioners, including Mr. Wu, without a warrant. They also ransacked Mr. Wu’s home and took his computer, printer, books, Falun Gong materials, and 19,000 yuan. Suo told Mr. Wu’s family that the arrest and trashing of their home had happened because of a Chinese government order.

The Chinese Communist Party (CCP) officials in Bazhong City kept harassing Mr. Liao Zeguang in an attempt to force him to withdraw his criminal complaint against Jiang.

Zhang ordered Mr. Liao to withdraw his complaint against Jiang. Instead of signing a withdrawal they handed him, he wrote “Punish Jiang Zemin according to the law” on the form. Zhang became very angry and threatened to cancel Mr. Liao’s low income financial assistance he receives from the government.

Li Shihua called Mr. Liao again at the end of August to demand that he withdraw the complaint. He again threatened to cancel Mr. Liao’s financial assistance and threatened Mr. Liao’s children, who are students.

Two police officers broke into Mr. Yang Xueqiong’s home on August 15, 2015. They plundered Mr. Yang’s home and took Falun Gong books, a DVD player, and other personal belongings. One week later, two other officers from the Xicheng Police Station illegally arrested Mr. Yang and took him to the Xicheng Police Station. They interrogated him about why he had filed a criminal complaint against Jiang Zemin. Several officers beat and kicked 74-year-old Mr. Yang.

The police also broke into practitioner Ms. Chen Sufang’s home in Bazhou Town on August 14. They ransacked her home and took away personal belongings, including all her Falun Gong books, photos, and materials that detailed the persecution of Falun Gong practitioners. 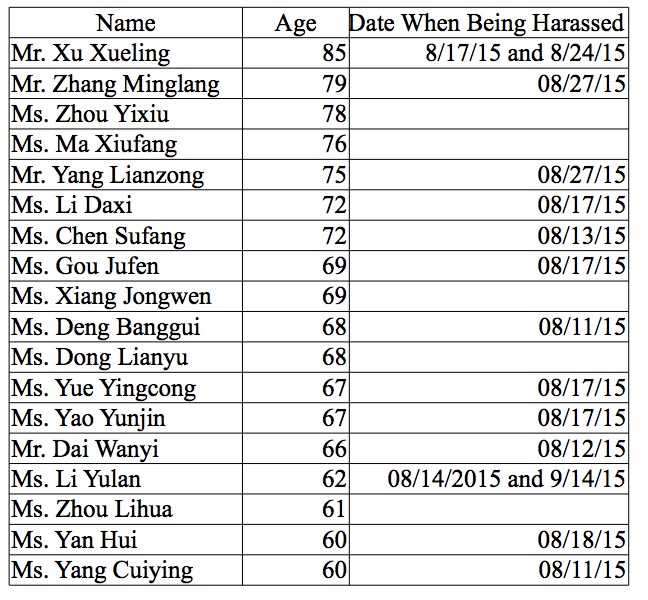 In 1999 Jiang Zemin, then head of the CCP, overrode other Politburo standing committee members and launched the violent suppression of Falun Gong.

The persecution has killed countless Falun Gong practitioners during the past 16 years. Many have been murdered for their organs. Others have been imprisoned and tortured for their belief. Jiang Zemin is directly responsible for the inception and continuation of this brutal persecution.

Under Jiang's direction, the CCP established an extralegal security force, the 610 Office, on June 10, 1999. This organization overrides the police and judicial system. The 610 Office carries out Jiang's directive to eradicate Falun Gong: ruin practitioners' reputations, cut off their financial resources, and destroy them physically.

Jiang stepped down as head of the CCP in 2002, but he has exerted much power from the shadows through a network of officials he put in place.