(Minghui.org) We arrived at a local post office at 10:30 a.m. on August 21, 2015, to mail our criminal complaints against former dictator Jiang Zemin for launching the persecution of Falun Gong.

"Please help them mail these letters,” the post office manager said to me. She looked annoyed. “You inquired about mailing complaint letters against Jiang four days ago. I wondered why it took you so long to mail them. Then, when you finally come, there are so many of you who want to mail your complaints.”

I looked around and counted eleven practitioners who were in the post office. One practitioner addressed the manager: “Some of us wrote our complaints some time ago, but no post office dared to mail the documents for us. Now, you are permitting to process the letters being mailed to sue Jiang, so all of us have come.”

When the post office manager heard this, she understood and she and her staff helped us process the letters. They did not even take their lunch break and finished at 1:40 p.m.

A young clerk was too tired to raise her head after she registered all the required documents on the computer.

Priceless on the Spiritual Level

While the staff processed the complaints, the manager answered our questions. She told us the routes these letters would take on their way to Beijing and what modes of transport would be used.

We offered to pay for insurance for the letters. She said, “Not necessary. They will reach Beijing safely. Besides, the value of the paper is not much.”

“It is not worth that much on the material level, but the documents are priceless on the spiritual level,” the practitioner responded.

The practitioner continued, “Over the past 16 years, Jiang Zemin's persecution of Falun Gong has reached inhuman brutality, and his followers have harvested organs from living Falun Gong practitioners for profit.”

Thousands More Complaints Will be Filed

Before we left, the manager said, “It isn’t necessary for all of you to come here at once to mail the complaints next time. You can stagger the mailings and send the documents at any time.” 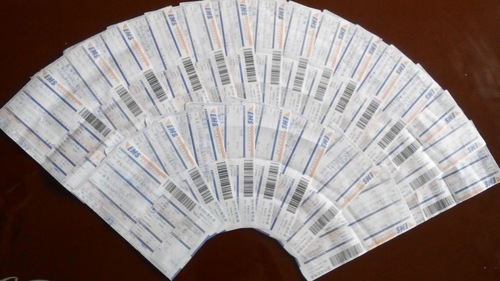 Some posted receipts of the letters suing Jiang

Another eight practitioners went to the post office and mailed their letters on August 25. It took 90 minutes for the post office staff to handle 24 letters. The manager asked how many more complaints were going to be mailed.

“This is just the beginning, as there will be many thousands more nationwide,” said a practitioner. “There are tens of millions of practitioners in the country. Can you estimate how many will be mailed?”