Snapshot of Falun Gong Practitioners Whose Lawsuits Against Jiang Zemin Were Received by Minghui on October 16-17, 2015

(Minghui.org) Many Falun Gong practitioners are now exercising their legal right to sue Jiang Zemin for initiating the persecution of Falun Gong and causing them great harm and tremendous suffering during the past 16 years. The number of lawsuits being filed against the former Chinese dictator is on the upswing.

The Minghui website receives copies of criminal complaints against Jiang from many practitioners daily. In this report, we present a snapshot of some of the practitioners whose copies of lawsuits were received by Minghui on October 16-17, 2015.

In their complaints, these practitioners recount years of imprisonment and torture, including being hung up by their wrists for hours, sleep deprivation, savage beatings, force feeding, and forced labor. They were also subjected to systematic brainwashing in attempts to force them to give up their belief. One practitioner lost her vision, one practitioner's arm became disabled, and another had such severe memory loss that she could not find her way home.

The persecution policy is to “ruin their reputations, cut off their finances, and destroy them physically.” To that end, two practitioners lost their jobs, one was forced to divorce, and another wasn't able to raise her son while she was in prison for 10 years.

“I am fortunate to have survived the 10 years of hell-like incarceration and gruesome torture. I am glad that I'm still alive to file a criminal complaint against Jiang Zemin. I sincerely hope that Jiang will be brought to justice,” Ms. Li Xiumin wrote in her complaint.

Because she practiced Falun Gong, Ms. Li lost her job as a college instructor, was arrested five times, and sent to a forced labor camp and prison three times. She spent 10 years behind bars and endured torture.

The labor camp guards once forced her arms behind her back as far as they would go and tied them together with a rope round her neck. They struck her buttocks with a rubber stick and slapped her in the face. She almost fainted.

She was forced to do hard labor and military training. When she and several practitioners protested by going on a hunger strike, they were force-fed through a thick plastic tube. The guards then used the same tube for different practitioners.

With the intense torture and intimidation, Ms. Li once compromised and wrote a statement renouncing Falun Gong. When she regained her courage and retracted her statement, the guards extended her term by two months. They restrained her in bed all night long, so that she couldn't move or get up to use the restroom.

The guards hung her up by her arms from two tall bed frames for nine days. “The greater the distance between the beds, the more pain. My arms were so sore and weak, and my legs and feet swelled. It felt like I was dying. This form of torture was used often,” she wrote. 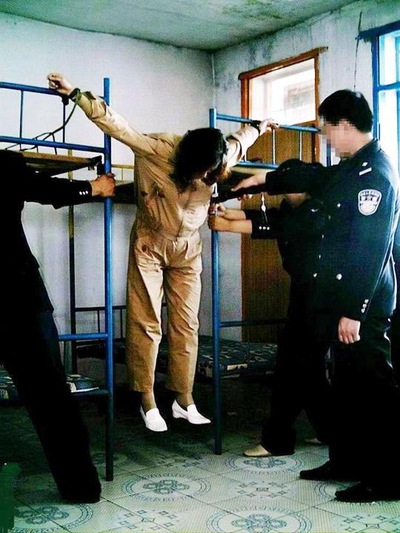 She also stated, “Falun Gong practitioners were frequently deprived of sleep. The longest time they didn't let me sleep was 12 days. It felt like I was going out of my mind. I began hallucinating. I couldn't maintain my balance and felt like I could fall over at any minute. I also had a severe headache.”

Ms. Li's family was seldom allowed to visit her. Even when the guards allowed her parents or her son to see her, they were only given a few minutes, and with a guard standing by the side to monitor them.

“I really want you to come home and cook for me,” her father said to her during one visit. That was about a month after her mother had passed away due to the mental torment of the persecution. “When he left, he kept looking back at me, not wanting to leave.

“My father passed away a year later. It was too much for him to bear by himself. Every time I think about how he looked at me, my heart aches.”

Ms. Yang Yue, a media professional, recounted in her complaint how the persecution of Falun Gong destroyed her career and her family.

Ms. Yang, a TV host and news editor at Heilongjiang Province TV Station, was arrested and sent to a forced labor camp twice for a total of four years in 2001 and 2002, with only three months between her two terms of detention.

In the camp she was hung up by her wrists, shocked with electric batons, forced to do hard labor and sit on a small stool for long periods of time, and was beaten and humiliated. She was also subjected to intensive brainwashing.

“The police once hung me up by my wrists during an interrogation. One officer slapped me in the face. My wrists and arms were severely injured. My left arm became numb and it took four months to recover. The scars on my wrists are still visible,” Ms. Yang wrote.

In another torture, the labor camp guards taped her mouth shut and restrained her in a chair. To try to force her to renounce Falun Gong, they didn't let her sleep or use the restroom, even if she was having her period. She passed out when the guards deprived her of sleep for five days and pressured her to sign a statement giving up Falun Gong. By the time she was released from the chair, her body was swollen and her face was pale.

Ms. Yang also mentioned a mysterious blood test. “All of the Falun Gong practitioners in Wanjia Forced Labor Camp were forced to have a blood test in 2005, but no other inmates or those who were sick were tested. I now suspect that they were building a donor bank to be used for live organ harvesting.”

During her detention in the labor camp, her husband's employer forced him to divorce her.

The leaders where Ms. Yang worked once slandered her in front of her mother. “The relentless propaganda and social pressure destroyed my relationship with my mother.”

From the time the persecution began, her employer followed the persecution policy to try to force her to give up practicing Falun Gong. In 2001, her employer put her under house arrest and subjected her to brainwashing. She was later demoted and her salary was stopped. In 2011, she was fired with the excuse that she was absent from work when she was detained in the labor camp.

Mr. Li Xiling, 62, is a retired elementary school teacher. He began practicing Falun Gong in 1997 and experienced tremendous improvement in his health.

After the persecution of Falun Gong started, he was arrested, tortured, and subjected to brainwashing for not giving up his belief. He was forced to stop teaching for over three months and left home to avoid being arrested in 2005.

In his criminal complaint against Jiang Zemin, Mr. Li Xiling recounted how he was tortured in Pingdingshan Forced Labor Camp in 2001. The guards whipped him with a belt, forced him to do long hours of hard labor, deprived him of sleep, subjected him to intensive brainwashing, and frequently told him to write "thoughts reports."

The guards forced him to bend over while holding his legs straight and lifting his arms as high as possible with his hands touching the wall. They often tortured him until he couldn't bear it any longer and then began another form of torture.

In addition, Mr. Li was also monitored by the inmates and denied use of the restroom. The guards confiscated his personal items such as his razor and nail clippers. He had to use broken glass to shave his beard.

She was detained in the notorious Masanjia Forced Labor Camp the first time for two years. The guards forced her to do hard labor every day and tried different torture methods to force her to give up her belief. She was released after eight months of due to her age.

The second time, when she was to serve two years in the labor camp, she was denied admission due to high blood pressure. The guards released her on medical parole and forced her to pay 10,000 yuan.

Ms. Qi was sentenced to three years in prison in 2013 and sent to Shenyang Women's Prison, which has one of the highest death tolls of Falun Gong practitioners due to torture. Ms. Qi was subjected to freezing, starvation, sitting on a small stool for a long time, and brainwashing.

She did more than 10 hours of hard labor each day in order to qualify for a term reduction. When she was released in early 2015, her hair had turned completely gray and she had lost most of her vision due to macular degeneration.

During the last 16 years, Ms. Zhang Yu was detained in brainwashing centers, detention centers, and prison for over seven years for her belief in Falun Gong.

Besides subjecting her to intensive brainwashing, the guards beat her, deprived her of sleep, starved her, and forced her to do hard labor. Her right arm became disabled as a result of torture.

While she was detained, her parents-in-law passed away. The police once threatened her teenage children that they wouldn't be allowed to attend college if she didn't give up practicing Falun Gong.