(Minghui.org) “This is unreasonable. It's unfair. How could this happen?” asked a police officer to Ms. Xu, who was distributing flyers beside the Los Angeles Police Department (LAPD) Headquarters on October 15, 2015. She explained to officers stepping out during lunch break that Falun Gong practitioners would be arrested and imprisoned in China for doing meditative exercises like the large group practice being conducted in front of the Los Angeles City Hall.

Several thousand people from 36 countries demonstrated the Falun Gong exercises in front of City Hall on October 15. Seeing the peaceful scene, one police officer commented, “The exercise is very good. Meditation is good for health.” 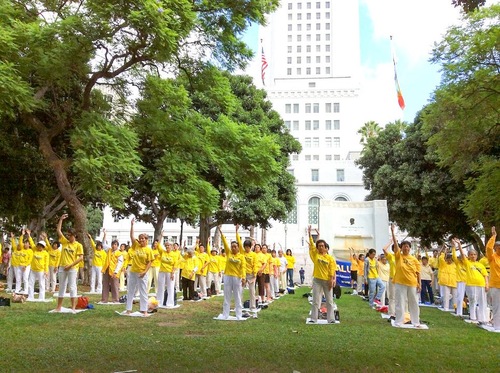 Ms. Xu explained the brutal persecution of Falun Gong still ongoing in China and how the communist regime harvests organs from living, imprisoned practitioners for profit.

Ms. Xu used murder to refer to the crime. The police officer said, “This is not only murder, but slaughter. This can only happen in totalitarian countries like China.”

Explaining why practitioners are holding such events around the city, Ms. Xu said, “We are here to ask for your help to end the persecution and rescue those practitioners being imprisoned and tortured in China. Their lives are in danger. Please sign the petition against the persecution on the website listed on the flyer.”

After the large-scale exercise demonstration, some practitioners shared their experience of practicing Falun Gong. Kathy from Toronto is an employee of an Ontario court. After taking up the practice, she applies the principles of Truthfulness-Compassion-Forbearance became more considerate of others in her daily life. She introduces Falun Gong to judges, lawyers, and other legal professionals she comes into contact with at work. 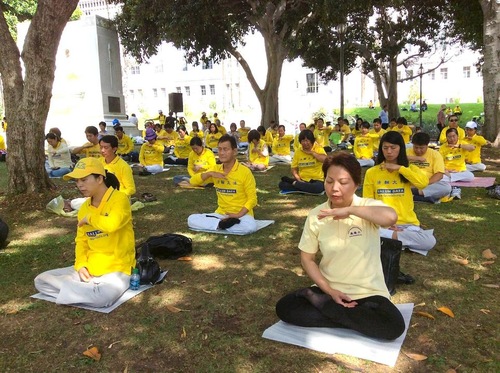 She also met with many Chinese people in her work. She said, “Some Chinese people from the mainland don't understand that the country of China and the Chinese Communist Party are not the same thing. They have different understandings of law. In Canada, the law protects victims.”

Another practitioner, Ms. Wang, said emotionally, “Master Li [the founder of Falun Gong] gave me a new life. I was paralyzed before practicing Falun Gong. I was bedridden and lost hope in life. But seven days after learning Falun Gong, I could stand up. This is marvelous!”

She and other practitioners do the Falun Gong exercises in a park every morning and tells people about the persecution in China. The police allowed them to set up a large banner there the past summer.

Captain Andrew Neiman stepped out of the police headquarters during lunch break and talked to Ms. Xu, who explained the Falun Gong events and the persecution to him. “I want to ask for your help to visit the website on the back of the flyer and sign the petition against the persecution,” said Ms. Xu. Capt. Neiman accepted a stack of flyers and agreed to distribute them to his colleagues. 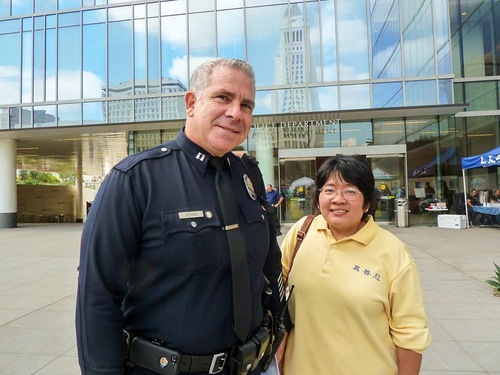 “A Common Wish in Coming to Los Angeles”