(Minghui.org) More than one thousand Falun Gong practitioners from around the world did exercises in groups at Grand Park and Pershing Square in Los Angeles, at 7:00 a.m. on October 15, 2015. The event began a series of activities to introduce Falun Gong around the city. Following the group exercises, a rally was held, followed by a large-scale parade, whose theme was stopping the persecution of Falun Gong and forced organ harvesting in China, and bringing the chief perpetrator Jiang Zemin to justice.

Grand Park is the center of the city's administration offices, including City Hall and the Superior Court. Pershing Square is one of California’s landmarks. Falun Gong practitioners performed the exercises to the peaceful music, which filled the busy city centers with refreshing tranquility. 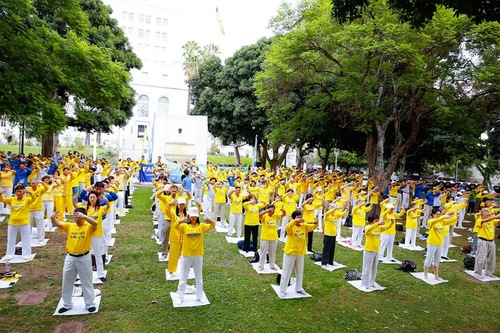 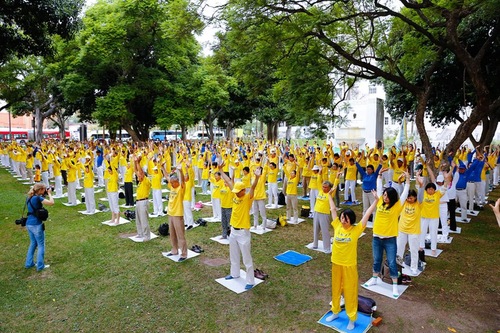 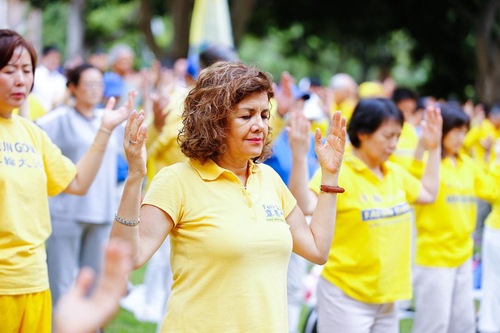 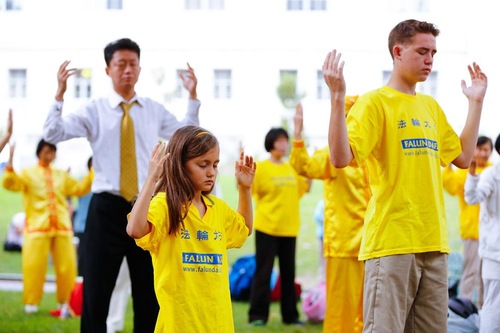 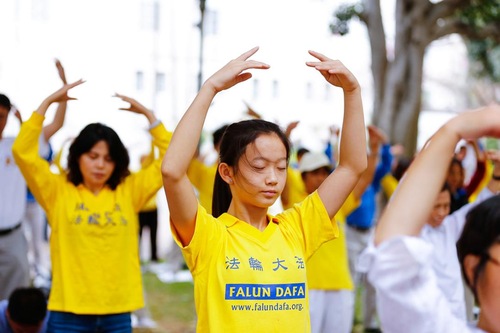 Office workers were surprised to see the large group exercise event on their way to work in the morning. One passerby named Gabriel said it was the first time he had seen Falun Gong exercises, and that he thought it looked great! He said he would read the introduction materials carefully and visit the Falun Gong website to learn more.

Jayson, a photographer, was on his way to the library when he spotted the peaceful group exercises. He said he felt a strong, calming, and pure energy. He couldn't help watching. Jayson couldn't imagine that such a peaceful exercise group was being severely persecuted in China. He planned to do some research on the persecution. Before he left, he repeated that the strong energy from the Falun Gong exercises made him feel very comfortable.

Joe, a city security guard, told the reporter, “It's the first time I have been involved in the security of Falun Gong activities. They are so quiet. I'm sure no one would bother them... Besides the beautiful exercises, I had a special feeling about the music. It's very relaxing, but has very strong energy in it. Very comforting.” Joe's colleague also commented that Falun Gong was a great group.

Rammed, a software engineer, told the reporter, “I got a flyer on my way to work this morning. I have been reading the flyer and talking with my colleagues about Falun Gong all morning. I received two different flyers at lunch break. I don't know if Los Angeles Times has sent a reporter, but they (Falun Gong practitioners) should be in the headlines today.” Rammed had heard about the persecution before, and was surprised that it was still ongoing.

Some people who didn't have to go to work stopped to watch the rally and parade. They received a lot of information about Falun Gong and the persecution in China.