A Common Wish in Coming to Los Angeles

(Minghui.org) Over 4,000 Falun Gong practitioners from more than 30 countries held a march, rally and group exercise demonstration in downtown Los Angeles on October 15, 2015. Their efforts to raise awareness of how the spiritual discipline is brutally persecuted by the communist regime in China won wide support. 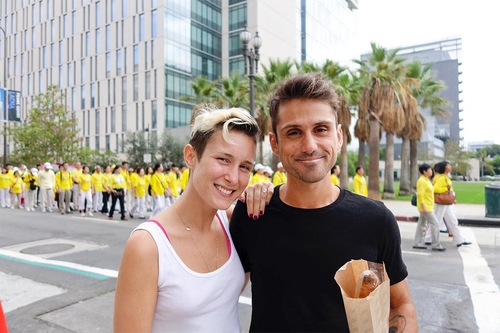 A tourist couple from Venice, Italy accepted a flyer from a Falun Gong practitioner. The young man explained to his girlfriend, “This practice is very good. It spreads a kind message to society.” He mentioned that he knew the ancient srivatsa symbol in the Falun emblem. 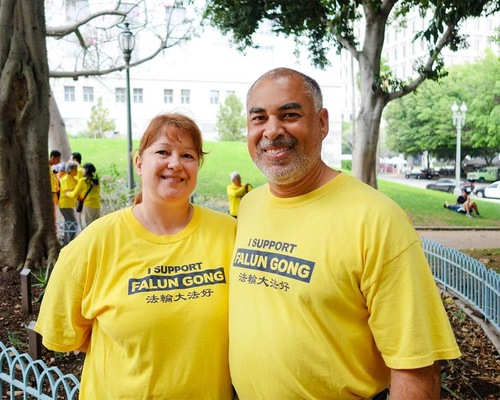 Vensen and his wife Bobbie started practicing Falun Gong in 2011. Vensen said, “I have become more healthy and energetic after learning Falun Gong.” They participated in the events in Los Angeles to raise awareness of the persecution still being carried out in China. 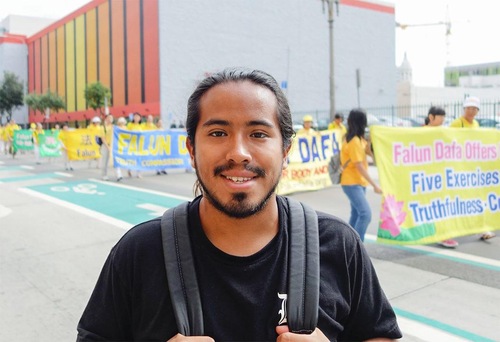 A man says he wants to help stop the persecution.

A young man asked a practitioner what the march was about. After the practitioner told him about the suppression of Falun Gong in China, the young man said he wanted to do his part to help stop the persecution. 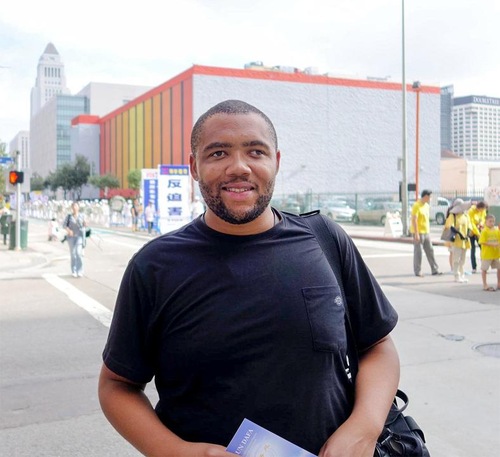 Jamal from Canada said he had heard of Falun Gong practitioners being killed in China for their organs. He has a friend in the military who received an organ transplant in Beijing in 2008. That friend told him that there were ample organ supplies from young girls and men. Jamal commended Falun Gong practitioners for holding events like this march and said that the organ harvesting in China must stop. 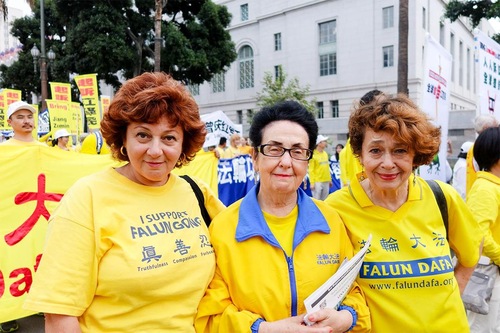 Falun Gong practitioner Marina, her aunt, and Nima from Russia

Marina from Russia lives in Philadelphia. She is a teacher and started practicing Falun Gong in 1998. Her unstable blood pressure and gynecological disorders were cured after practicing Falun Gong. She follows the teachings of Truthfulness-Compassion-Forbearance in her daily life. 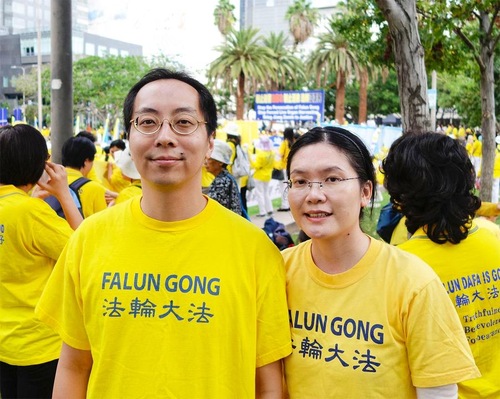 Dr. Wu from Taiwan, who works at a media company, has practiced Falun Gong for 17 years.

Dr. Wu obtained his Ph.D from National Taiwan University. He has practiced Falun Gong for 17 years with his parents, who are professors at the university. After learning Falun Gong, he came to understand the meaning of life. His wife said she participated in the event to let more people know about the brutal persecution and the live organ harvesting crimes carried out by the state in China. 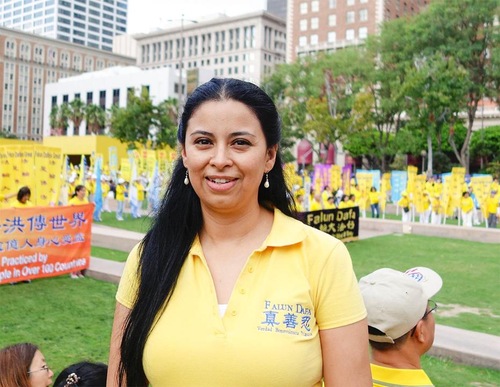 Mayra from Mexico City has practiced Falun Gong for 11 years.

Mayra from Mexico City has practiced Falun Gong for 11 years. She had previously been a nun for 13 years. “I came to understand many issues after reading Zhuan Falun. Falun Gong opens my wisdom and makes me more healthy,” she said.

“Over 1,000 Hold Candlelight Vigil at Chinese Consulate in Los Angeles”