(Minghui.org) The four Falun Gong practitioners still detained in the Jiansanjiang case were tried again on January 8, following a three-day-trial last December. The authorities had intended to keep the latest trial secret, but an agent sent to monitor one of the practitioners' family leaked the news by accident three days before the hearing.

In the ensuing few days, the practitioners' attorneys went to various agencies in three different locations hundreds of miles apart to try to get court approval of their application to re-establish their legal representation, which they withdrew as a protest to the court's due process violation in the December trial.

The authorities however, responded with inaction. Unable to defend their clients in court, the lawyers staged two public protests demanding their legal right to represent their clients, who were arrested together with three other practitioners and four attorneys on March 21, 2014 for seeking release of other detained Falun Gong practitioners.

Dubbed “Jiansanjiang Case,” the March arrest has drawn wide attention both inside and outside of China.

The authorities released some of the arrested later on, but the three women and one man remain incarcerated, with Ms. Meng Fanli (孟繁荔), Ms. Wang Yanxin (王燕欣), and Ms. Li Guifang (李桂芳) at Jiamusi Detention Center, and Mr. Shi Mengwen (石孟文) at Jiansanjiang Detention Center.

In the absence of legal counsel, the practitioners defended their right to practice Falun Gong and requested unconditional release at the latest trial. The judge however ended the hearing after three hours without delivering a verdict.

More than ten officers suddenly descended upon Mr. Shi's parents' house on January 5 of this year. The elderly couple was shocked after overhearing one agent mention that a trial of the four practitioners was scheduled for January 8.

None of the four practitioners, their families and lawyers received any notice of the imminent trial.

When the families called the next day to verify the trial info, Jiansanjiang Court's top officials and judges in charge of the case denied knowledge of the hearing.

Upon learning of the hearing from the families, two of the attorneys, Wang Yu (王宇) and Zhang Weiyu (张维玉) rushed to Jiamusi Detention Center to visit their clients on January 7.

The detention center denied their visit, citing a court notice that indicated the two lawyers, along with their four colleagues, were disqualified from representing the four practitioners because they refused to defend their clients at the December trial.

The two attorneys affirmed that they never intended to stop defending their clients. They withdrew their representation in December as a means to boycott the three-day-trial that was plagued with numerous court violations of due process. They expressed their willingness to represent their clients shortly afterwards, and the practitioners agreed to still use them. However, the authorities delayed processing their formal application to re-establish legal representation.

Still not allowed to visit their clients, the two attorneys drove 150 miles to the Jiansanjiang Court in the afternoon. The security guards refused to let them in after the lawyers objected to their body-search demand. The guards also made it clear that Judge Wang Jingjun wouldn't come out to meet with them either.

Frustrated, the two attorneys unfurled a banner reading “I Want My Right to Defend My Clients” outside the courthouse. 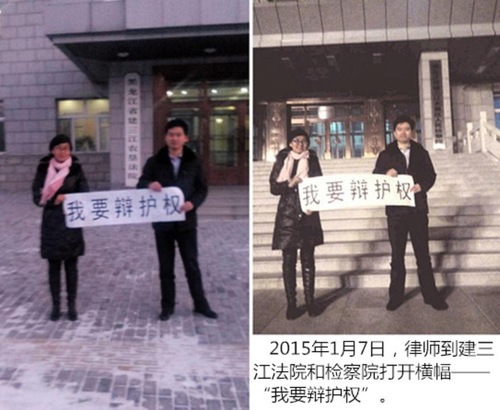 Lawyers Wang Yu and Zhang Weiyu protested outside the courthouse

The two lawyers next traveled about 470 miles to Harbin, the capital city of Heilongjiang Province. They were joined by several other lawyers involved in the case on the morning of January 8. They visited the Provincial People's Congress, Provincial Procuratorate, and Provincial High Court to report the court's refusal to process their legal representation application and its failure to notify families and lawyers of upcoming trials.

They however were told the person in charge of dealing with complaints was not in. The lawyers staged another public protest outside the provincial government agencies. 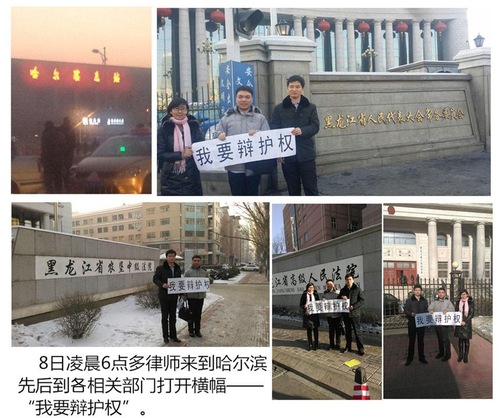 When the four practitioners were tried on December 17-19, 2014, a total of eight attorneys defended them in court.

Six of the lawyers withdrew their representation on the last day of the trial, after observing a series of court violations.

The other two attorneys kept defending their clients in court, only to be detained soon after their colleagues quit in protest. Though they were released several hours later, presiding judge Wang Jingjun (王敬军) disqualified them for trivial reasons later that day.

A deputy judge sent a text message to the practitioners' families the next day, warning them of the possibility of losing legal representation if they failed to find new lawyers within 15 days. He hinted that court-appointed lawyers would be available to them.

The eight lawyers filed joint complaints to various supervising agencies of Jiansanjiang Court after the trial.

The six attorneys who had withdrawn their representation visited their clients Ms. Meng Fanli, Mr. Shi Mengwen, and Ms. Li Guifang on December 30, 2014. They signed new representation authorization documents, as both sides felt that these attorneys are still the best attorneys to represent them.

However, these attorneys were not able to hand in the authorization forms at the Jiansanjiang Court. The guards again used the “body-search” excuse to stop them at the door. They were not able to reach judge Wang Jingjun via phone call either.

In the end, the attorneys had no choice but to mail the authorization forms to the court, even though they were already in the office building.

They went to Harbin the next day and visited various agencies. They did a round of appeals similar to the aforementioned January appeal, reporting the lower court's violations and requesting the higher court to take over the case and to dismiss the presiding judge. 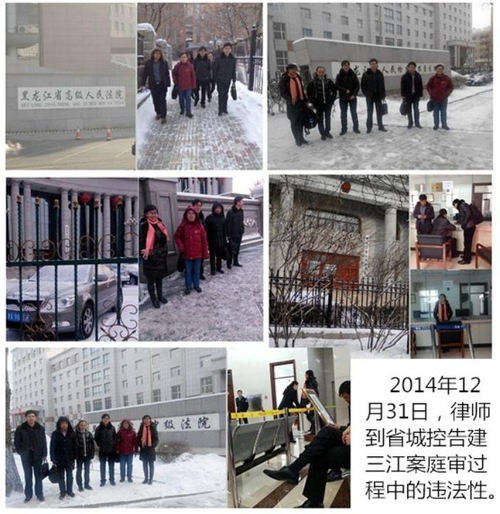 The authorities, however, did nothing to move forward the lawyers' application to re-establish legal representation or address their concerns about court violations.