(Minghui.org) On the third day of the trial of four Falun Gong practitioners arrested this March in the Heilongjiang human rights case, defense lawyers boycotted the session on December 19 and elevated the case to the local Procuratorate and disciplinary commission.

They made the decision based on repeated legal violations by the court during the first two days of trial and the fact that the four practitioners were in dire health condition.

“There is no way for us to continue the defense. The court's violations of law are way too severe. The entire trial is illegal. There is no justice at all,” said one of the six lawyers Wang Yu (王宇).

Lawyers Wang Quanzhang (王全章) and Liu Lianhe (刘连贺) were detained for hours after the trial. Presiding Judge Wang Jingjun (王敬军) revoked their defense qualification, citing that Mr. Wang “severely disrupted the order of the court” because his cellphone vibrated once during the trial, and Mr. Liu accepted the case without permission from his law firm.

With six lawyers withdrawn and two dismissed by the court, the practitioners' family members were told by the court that they had to find new lawyers in 15 days, and that failing to do so would constitute giving up the right to defense representation.

In fact, the eight lawyers met numerous obstacles seeking justice for the four practitioners. Since they accepted the case, the trial dates changed multiple times; the lawyers themselves were constantly threatened by the authorities, and during the three-day trial, not only did the court suppress them through many illegal means, but even the their safety were jeopardized–everywhere they went, they were followed by plainclothes police officers.

At the time of writing, the four practitioners are still detained. Their families aren't allowed to visit them. Due to harsh conditions and torture in the detention centers, their health deteriorated. Their current situation is very worrisome.

On their way to the court on December 17, a seemingly easy trip was full of obstacles: the lawyers were stopped at three checkpoints set up by police. Their IDs and minivan were confiscated, so they had to ride a taxi to the court. 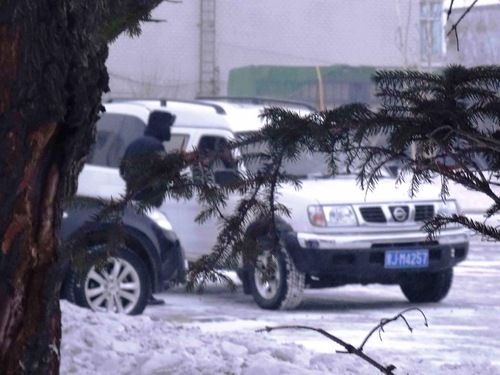 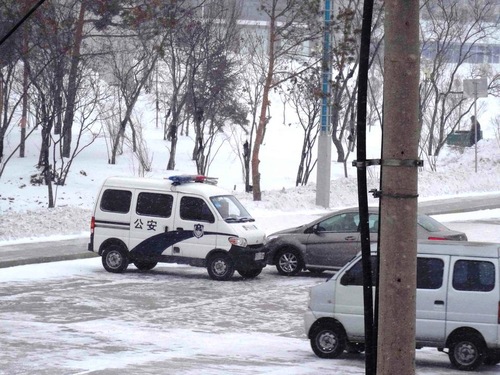 Police set up three checkpoints in an attempt to prevent the lawyers and the practitioners' families from attending the trial.

When they finally arrived, the lawyers were forced to go through a security check before they could enter–an unusual and illegal procedure in China.

As the prosecutor read the indictment during the trial, the lawyers realized that it was a different version than the one they had received earlier. An important evidence item–meeting records by authorities planning the suppression of Falun Gong–which was favorable to the defendants, was left out.

When the lawyers requested to add it back, the prosecutor ignored them, and the judge forbade them from discussing the evidence.

Due to the lawyers' protests of the illegal trial procedure, the judge adjourned the hearing several times. In the end, the judge announced that the trial would continue the next day.

The three female practitioners, Ms. Wang Yanxin (王燕欣), Ms. Meng Fanli (孟繁荔), and Ms. Li Guifang (李桂芳) were taken back to the detention center, which was five hours away from the court. They barely had any sleep before they were woken up and taken back to the court the next morning for the 9:00 am hearing.

Four practitioners are still in custody

When the lawyers prepared to leave for the court the next morning, they found more than 30 plainclothes officers in their hotel lobby. They claimed to be “protecting their safety.” After they left, they were followed by seven cars without license plates.

During the second hearing on December 18, when lawyer Xi Xiangdong (袭祥栋) argued with the judge about the illegality of the trial procedure, two bailiffs came over, held his arms and pressed his shoulder. One of the bailiffs pinched his neck. In the end, lawyer Xi received a warning from the judge.

Lawyer Wang Yu also received a warning for repeatedly raising her hand to request a chance to talk. Without permission from the judge, the bailiff pressed her hands down with impunity.

In order to demonstrate the illegality of the entire case, the lawyers asked the practitioners many detailed questions. The trial proceeded very slowly.

When the trial finished at 6:10 pm, the three female practitioners were dizzy and exhausted and could no longer maintain a clear head to answer questions. They were taken back to the detention center that evening.

After the lawyers left the court, plainclothes officers continued to follow them. 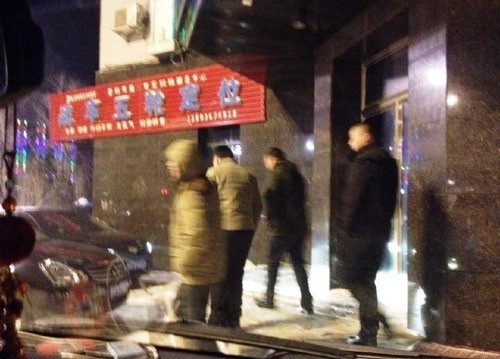 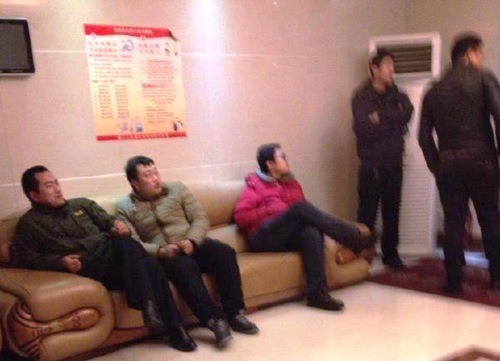 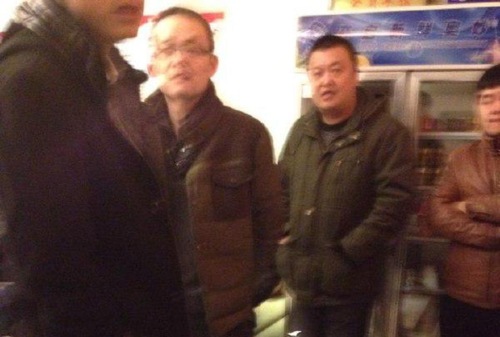 Plainclothes officers followed the lawyers while they were looking for a hotel on the evening of December 18, the second day of the trial.

In the early morning of December 19, the third day of the trial, the eight lawyers went to Jiansanjiang Procuratorate to file a complaint against the court. 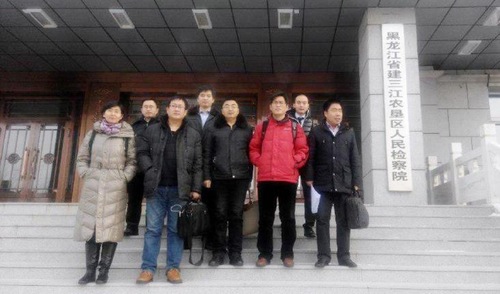 The lawyers tried to complain to Jiansanjiang Procuratorate about the court's violation of law during the trial, but to their surprise, the entire Procuratorate was deserted.

However, to their surprise, on a Friday morning, the Procuratorate was entirely empty except for one person staffing the receiving room.

Meanwhile, at the court, the authorities tried to persuade the practitioners' family members to replace their lawyers with those they recommended. Upon learning this, the lawyers rushed back to the court and prevented the switch.