(Minghui.org) A 66-year-old man from Gongzhuling City was recently sentenced to three-and-a-half years without his family's knowledge. His loved ones vowed to appeal upon finding out the verdict, but the head of the local 610 Office said to them, “It's no use. The verdict was approved by the intermediate court beforehand.”

The only “crime” Mr. Wang Sheng (王胜) allegedly committed was his practice of Falun Gong, a self-cultivation system being persecuted by the Chinese Communist Party.

Mr. Wang was returning home from an out-of-town wedding when he was arrested at the bus station on April 26 this year. Li Jianqi and several other officers from Gongzhuling Domestic Security Division punched and kicked him, causing fractures in his thighs.

Despite his leg injuries, the police confined Mr. Wang in a cage to humiliate him and increase his suffering. 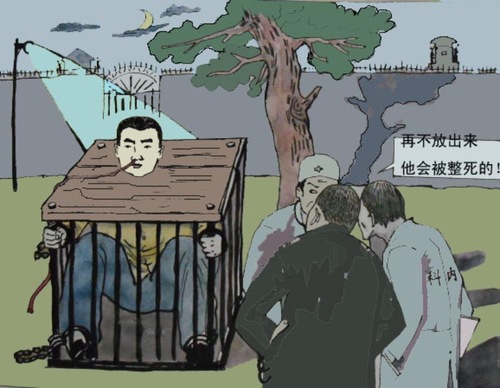 Illustration of Being Confined in a Cage

Li Jianqi continued torturing Mr. Wang the next day during the interrogation.

The local Procuratorate was accommodating at first, allowing Mr. Wang's lawyer to review his case document. After noticing insufficient evidence against Mr. Wang, the Procuratorate returned the case to the police department.

In the meantime, the detention center refused to let the lawyer meet with Mr. Wang, citing orders from the police. China's criminal law, however, states that a defense lawyer must be granted a meeting with his or her client within 48 hours of making a meeting request.

The lawyer asked Mr. Wang's daughter to express-mail his client-representation paperwork to Judge Zhang Xiaochun. When the daughter called Judge Zhang to check on the status of the mail, his staff used various excuses to turn her away. She went to the court but was stopped by a security guard.

The court then tried Mr. Wang without notifying his lawyer or family. When later questioned by the family, Judge Zhang claimed he had never received the lawyer's client-representation paperwork.

Mr. Wang's family learned later that the court received “three-no” orders from its superiors regarding Falun Gong practitioners' lawyers: the judge was instructed not to receive lawyers at the courthouse, not to accept lawyers' legal representation, and to not provide any explanations for the legal procedure and verdicts.