(Minghui.org) Columbia University welcomed students back to school with its annual Student Activities Day fair on September 5, 2014. Over 300 organizations set up tables to inform new and returning students about their clubs. Columbia's student-run Falun Dafa [also known as Falun Gong] Club was one of them. 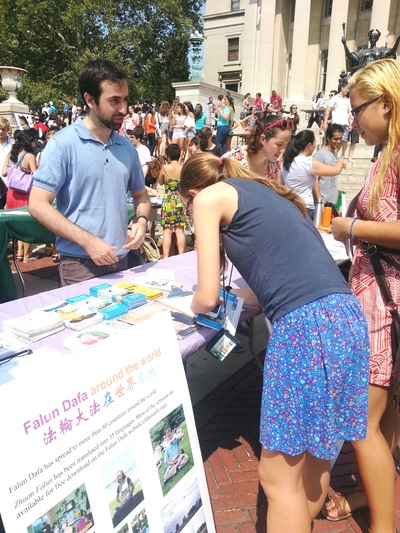 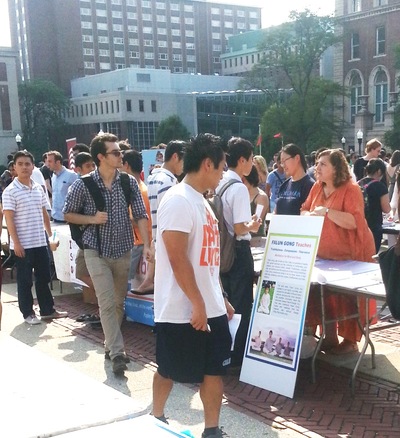 Falun Dafa at the student fair

The Falun Dafa display was centrally located with two posters depicting the exercises in front of the table. Many students and faculty stopped to get a flyer, learn more about the practice, and sign up for the weekly workshops held on campus.

Quite a few were interested in the meditation practice for its benefits in relieving stress and promoting health. Others had heard about the practice before and wanted to learn more.

Many Chinese students were interested since they had heard about the practice in China, but thought of it as “controversial” due to the influence of the Chinese Communist regime's lies and propaganda. Some were hesitant, but quietly read the posters depicting Falun Dafa around the world and took printed materials.

Several Chinese took pictures of the posters and listened to practitioners introducing and teaching the exercises. Some were surprised and curious to see Western Falun Gong practitioners, and they had their photo taken with them.

Some of the Chinese students who had heard about the persecution stoppedto talk to the practitioners. One said that he had read in the Chinese Epoch Times about the organ harvesting crimes committed by the Communist regime and wanted to learn more.

A Chinese lady seemed to be very surprised when she first saw the posters and stared at the display for some time. When a practitioner greeted her and handed her a flyer, she turned and left. A minute later she returned and asked, “Can I take some informational materials? I want to see what this is all about.”

“Of course,” a practitioner replied. “You're welcome to learn more about Falun Dafa and the persecution.” The practitioner handed her a flyer about the exercises and a brochure exposing the Chinese Communist regime's crimes and the international lawsuits against chief perpetrator Jiang Zemin. The lady happily accepted the materials and took pictures of the posters.

Another student was a graduate of Tsinghua University in China and had seen some of the abuses of Falun Dafa practitioners by Communist Party henchmen. He walked by the table several times, first being pulled away by a friend, and then later coming back to pick up a flyer, before finally stopping to chat with the practitioners to get more information.

“Minghui Summer Camp, a Compassionate Environment for Youth in France”