(Minghui.org) The 2014 Falun Dafa Cultivation Conference of Canada was held on August 23 in the Convocation Hall at the University of Toronto. Over 1,000 practitioners participated. Twenty-four Chinese and Western practitioners shared their cultivation experiences of studying the Fa well, looking inward, cultivating genuinely and solidly, and saving people with compassion. 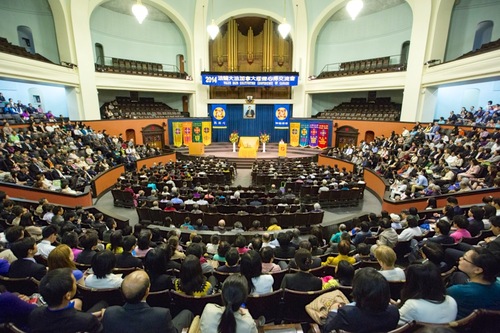 The 2014 Falun Dafa Cultivation Conference of Canada was held August 23 at the University of Toronto.

The stage was decorated with Master's picture and eight Falun emblem banners. Banners reading “Buddha Law Is Boundless, Falun Turns Constantly” hung on either side of the hall. 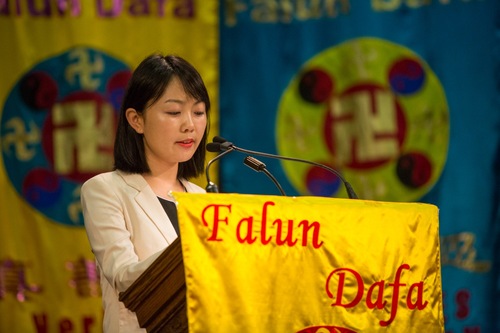 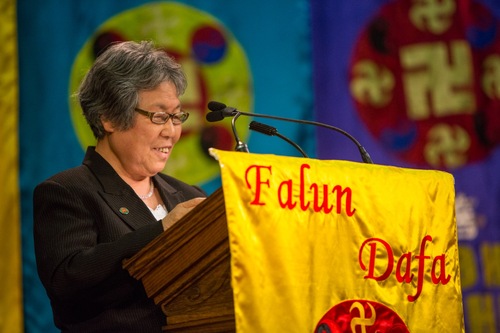 Ms. Zhang Yuhuan has cultivated for 18 years. Once she realized the importance of clarifying the facts about the persecution at tourist sites, she overcame her attachment to comfort and participated.

“Sites in Toronto have heavy tourist traffic. Practitioners set up a righteous field at the CN tower. Banners such as 'Falun Dafa Is Good' and 'Disintegrate the Chinese Communist Party' are highly visible. Our banners display our compassion. I once asked a Chinese man to remember 'Falun Dafa is good' after he quit the Chinese Communist Party (CCP). He responded, 'I have seen it. It's the first thing I saw upon my arrival here.'”

Ms. Zhang also pointed out that the CN Tower is now even more frequently visited because of practitioners' presence, “The Tower is packed nowadays, because everyone is eager to learn the facts here. Whether it's Westerners or Chinese tourists, there are always long lines at the site. Even the aquarium and antique railway at the foot of the Tower are very popular. Dafa disciples know that it's the result of divine arrangements for people to come to hear the truth.”

Some Chinese tourists may not be very respectful when they are first presented with facts inconsistent with CCP propaganda. Mr. Zhang shared, “What have we come here for? We have come here to save people. Frustration and humiliation are our human responses. It means that our human attachments are being touched on. We are affected by the tricks of the wicked CCP. Saving people becomes quite difficult when we act without righteous thoughts.

“A tour guide once alerted me that a carload of CCP officials would come the next day. I tried to help them even though some of them were arrogant and berated me. I didn't give up. Eventually, 13 of them agreed to quit the communist organizations. They thanked me before they left, and told me to take care.”

Rita, a young woman who started practicing in 2011, shared how she managed to clarify the facts at tourist sites. She was able to overcome concerns about herself. As she helped more tourists, she found that her own belief in the Fa and sense of urgency grew stronger.

She enlightened to the fact that many factors are at play when people make the decision whether to quit the CCP or not. However, deciding to inform them of the facts and help them make decisions shows our hearts. If we have the will, Master will arrange opportunities for us.

Ms. Zhang Menghua shared her experience of clarifying the facts in front of the Toronto City Hall:

“During the winter, we sometimes wear two or even three coats and two pairs of gloves. We encourage each other. The snow was once so heavy that we couldn't even see people right in front of us. All of sudden, over 20 college students from China came to the City Hall to ice skate. We realized that no matter how cold it was, people with predestined relationships would come to hear the truth if we were there.”

Another practitioner, Ms. Zhang, who works at a college in Winnipeg, has turned her school campus into a “tourist site” for herself. She helps Chinese students quit the CCP.

She said, “After studying Master's 'Fa Teaching at the 2013 Western U.S. Fa Conference,' which emphasized clarifying the facts to Chinese tourists, I asked myself, 'Where is the tourist site in my city?'

“My city is not a Chinese tourist destination in the traditional sense. We have held events at our tourist spots, but haven't seen many Chinese. However, I see a lot of Chinese students on campus. Isn't this also a 'tourist site'? Each year, many Chinese students come to study at our school.

“Ever since I realized that, I have helped them to quit the CCP, no matter how busy I am. I carry English flyers and materials about quitting the CCP in my purse. Sometimes my righteous thoughts are strong. I can approach a Chinese stranger and ask if he has heard about quitting the CCP. Several sentences are sometimes enough to help him quit. Such positive experiences are very encouraging. I am also learning from experienced Chinese practitioners how to more effectively help our fellow Chinese.”

Ms. Pei from Toronto shared her experience of saving people by calling China, and how she has elevated her xinxing during the process:

“Calling China to help rescue practitioners is no less than a battle between righteousness and evil. We have to overcome a lot of tests targeting human attachments, such as zealotry, frustration, competitiveness, and showing-off. When the other party doesn't answer after 10 or 20 calls, it's hard not to start making assumptions why he is ignoring our calls. If the person who answers disagrees and curses us, sometimes I'm really depressed.

“Eliminating depression and persisting in our efforts are all due to Master's help and the power of the Fa.” She is now more or less unaffected by any verbal abuse from those who answer her calls in China.

Ms. Liu from Ottawa talked about similar enlightenment, “On the surface, I'm making the phone calls. In fact, it's a battle between righteousness and evil in other dimensions. Master's law body is helping us. The righteous gods are safeguarding the Fa.

“I firm up a very strong thought, 'Completely eliminate any evil beings and factors that interfere with the salvation of sentient beings. Let sentient beings' knowing sides dominate, and make their decisions without interference.'

“I believe that once the phone rings on the other side, my supernatural power is there. Thus, more people answer the calls and are willing to listen to the facts. The number of people who agree to quit the CCP and its affiliated organizations has also increased.”

Fresh out of college, Ms. Xu came to Toronto in 2006. She started signing up Shen Yun ticket retail sites one by one, and specialized in doing this during the following years. She shared how she looked inward and found the root of resentment:

“When I looked inward, I found my chronic grudges. As I dug further, I realized that the root of long-term resentment was jealousy. I took myself too seriously, and always thought my ideas were the best. I considered myself a 'role model.' I then expected everyone to match my performance level. Once I saw those practitioners I deemed irresponsible, I got mad. This is the same as the jealousy described in Zhuan Falun.”

She works at the city center in Toronto, and uses her break time at work to look for retail ticket-selling sites. She understands that it's no coincidence that she works there, and knows that the key is to balance all her responsibilities and priorities well.

“During the past years, I have visited almost every commercial building in the center of Toronto and worn out several flats... I was able to find over 20 retail sites each year,” she said.

In addition to signing up retail sites, she was also in charge of negotiating media contracts with five mainstream TV stations. She said that she joined the promotion efforts two years ago with many aggravations.

“Last year, I told myself, 'Do not fixate on the specifics. Doing a project successfully doesn't mean that I have cultivated well. There will be an end to the Fa-rectification; there will be a last season of our promotional efforts. If I can have the honor to be part of it, I ask myself each year, 'Have I made the best efforts to harmonize what Master wants?'”

Ms. Li does layout work for a media agency. She used to do the same thing in South Korea before she came to Toronto. She shared that quite a few practitioners had left the project when it was just starting up. Things were quite difficult.

When she was also considering leaving the project, she realized, “How can I leave the project just because others have done so? I only have the right to require myself to give my best. How can I judge others and demand that they to do the same? In addition, everyone's situation is different. Cultivation is not about holding others to certain standards.

“I thought, 'At least my efforts will make the project a little better.' I then realized my selfishness. I was after the mighty virtue. Master arranged for me to work in this media project, so it is my responsibility to do well. I should let go of all human attachments and persist in my efforts,” She is still working in the project.

Judith does business development for the media. She shared how she purified herself during the process:

“As I discover more of my true self, cherishing myself and others has become easier. As I accept myself and do not compare myself with other practitioners regarding professional level, purity, and capabilities, my mind is broadened and more peaceful. I become more generous and less jealous of others. This helps me to better cherish others and myself.

“I have learned to think about others and put myself in their shoes. I have also accepted the fact that others may not think the same as I do. I know many don't agree or understand my approaches. However, it is not that important. What's important is that we treat each other with compassion, respect, and kind understandings. Master looks at our hearts.”

Ms. Xie Xueying, a media salesperson, said that she was finally able to rid herself of jealousy after several years of cultivation, “It is not a part of my true self. The dark side is now replaced by righteous thoughts. My positive attitude helps others feel peaceful and happy.”

The conference concluded successfully at 6:25 pm.