(Minghui.org) In “The Mystery Shrouding China’s Communist Party Suicides,” a Wall Street Journal article mentioned, “A recent state media report has reverberated online and in the Communist Party press by revealing that at least 54 Chinese officials died of 'unnatural causes' in 2013, and that more than 40 percent of those deaths were suicides.”

Xu Ye’an (徐业安), deputy chief of the National Appeals Bureau, killed himself in his office in April 2014, after less than three years at his post. His career had steadily progressed, starting with a position in the appeals office of Hubei Province in 1982. According to local Chinese news reports, Xu hadn't been happy, but the circumstances surrounding his death remain unclear.

The National Appeals Bureau (or the State Bureau for Letters and Calls) is the office that petitioners visit, hoping to have justice served after exhausting other means. During the early years, after the persecution of Falun Gong started in 1999, Falun Gong practitioners were the largest group visiting various levels of this agency. Many were arrested shortly after they walked in.

While some people speculate that suicides among Chinese Communist Party (CCP) officials can be attributed to the current anti-corruption campaign in China, the toll taken on CCP officials during 15 years of persecuting Falun Gong should not be underestimated.

Knowing that the persecution is wrong and the practitioners are innocent of any wrongdoing, years of doing bad deeds has generated a tremendous amount of guilt and stress for these officials. As practitioners expose the perpetrators, local communities expect that these perpetrators will meet with their karmic retribution, a traditional Chinese version of “what goes around comes around.”

Over 20,000 CCP officials have received retribution since the inception of the persecution as of 2013, based on information collected by this website. Falun Gong practitioners collect such cases to alert other perpetrators, and help them avoid meeting similar fates.

Even though unnatural deaths are the most common form of retribution, it may take many forms, even including disciplinary measures within the CCP system.

In the three months following the CCP's 18th National Congress in November 2012, 340 secretaries of the PLAC (Political and Legal Affairs Committee, a key organ in persecuting Falun Gong practitioners) have died as a result of murder, car accidents, fatal diseases, or have been sacked and subjected to internal investigations.

A total of 453 PLAC officials were arrested between November 2012 and January 2013, as specified in a report by the CCP PLAC to higher authorities.

Below are some examples of Chinese officials encountering karmic retribution.

Lu Guang, the deputy police chief in Huanan County, Heilongjiang Province, died of brain cancer on June 11, 2014, at the age of 53.

Chen Qinglai, chief of the Jianshedajie Police Station in Qinghuangdao City, Hebei Province, collapsed at his desk and died of a heart attack. He was only 46 years old.

Cao Dawei, head of the brainwashing center in Wanqinshanzhuang, in Zhengzhou, Henan Province, died of a heart attack on January 4, 2014, at the age of 54.

Liu Chunxiao, captain of Ward 16 of the Tailai Prison in Qiqihar Province, died of liver cancer in December 2013.

More cases that took place in the first half of 2014:

He Huixiong, the 610 Office director in Shanwei City, Guangdong Province, died in an accident.

Tao Xuwei, deputy captain of the criminal offense team in the Yichun City Police Department in Heilongjiang Province, died in a car accident. 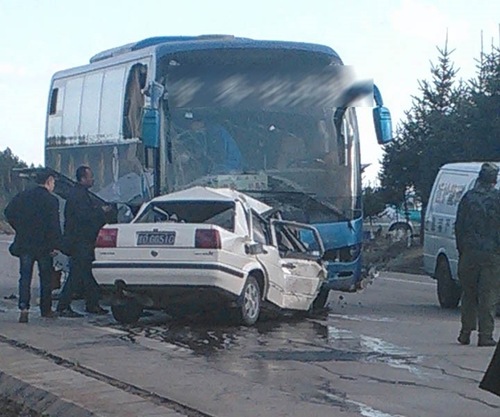 Considering the Chinese Communist Party's news blockade, especially concerning perpetrators meeting with retribution, it is highly likely that many more such retribution cases are taking place without being noted. However, the trend of these types of cases increasing in frequency and severity is clear and undeniable.

“Tianjin Prison Authorities Have Denied Mr. Huang Liquiao's Wife to Visit Him for Over Two Years”