This was the second year that practitioners were invited to the annual fair, one of the largest events in Queensland. They joined the over 140 exhibitors at the Brian Harris Oval. The Ormeau district, where the event was held, is located between Brisbane, the capital of Queensland, and the Gold Coast, a famous tourist destination. 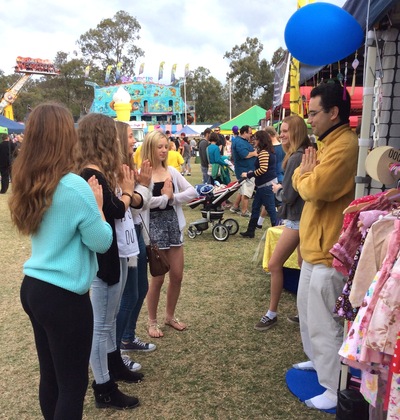 Practitioners teach visitors the exercises at the fair. 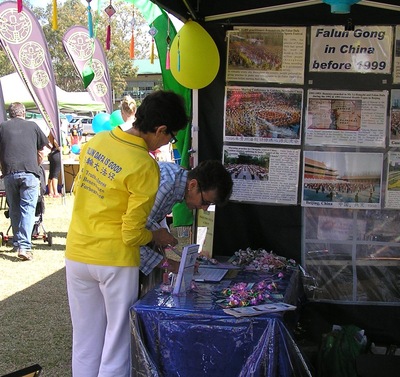 A visitor signs the petition to help stop the persecution. 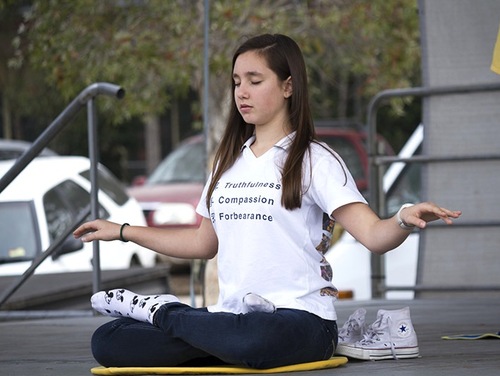 A practitioner demonstrates the meditation on stage.

A retired couple, Carmel and Ron, were sympathetic upon learning the facts of the persecution and said that they were glad they could sign the petition to end forced organ harvesting. They hoped that the persecution would soon end.

Mark, an armor testing specialist, had heard of the Chinese regime's persecution of Falun Gong. He also mentioned that he had been following the organ harvesting issue.

Reg, an advocate for crime prevention, was shocked to learn that the Chinese Communist Party (CCP) had extended their persecution beyond China and commits crimes against Australian citizens. He signed the petition to support Falun Gong.

During the two-day event, many visitors were attracted to the Falun Gong exercises. Sharee who works in the airline industry and her two friends from Indonesia, had seen practitioners doing the exercises in Brisbane. Sharee had been wanting to learn the meditation. She took down the contact information of the coordinator at a nearby exercise site, and plans to learn the meditation soon.

Lisa, a Reiki master, attentively listened to the introduction of exercises and facts of the persecution. She said she was looking for something to help her, as she had been feeling depressed and unwell. Practitioners recommended that she read Zhuan Falun, Mr. Li Hongzhi's main book of Falun Gong teachings. Lisa said she would read it online.

There were Chinese among the visitors as well. After learning the facts about the persecution, some decided to join the movement among Chinese people to withdraw their memberships in the CCP and its affiliated organizations.