(Minghui.org) Throughout Chinese history, each dynasty had its unique style of architecture, dress, culture, and art. This article will describe three constructions by a particular emperor during the Ming Dynasty.

The Yongle Emperor (1360-1424), born Zhu Di, was the third emperor of the Ming Dynasty (1368-1644). During his reign, which spanned from 1402 to 1424, he ordered the construction of the Forbidden City in today's Beijing, the Taoist Architectural Complex in Mount Wudang, and the Porcelain Tower of Nanjing. All three featured bright, colorful, and lustrous glazed tiles. This differentiated them from the traditional buildings with white walls and dark tiles.

1. The Beauty of Colored Glaze – the Porcelain Tower of Nanjing

The Porcelain Tower of Nanjing, in Chinese literally translates to the “Temple of Repaid Gratitude.” It was designed and built by order of the Yongle Emperor. The entire tower, not just the tiles on the roof, was constructed from colored, glazed bricks.

People are familiar with houses built of stone or wood, but it is truly rare for an entire building to be made of glaze. The 9-story, octagonal Yongle Porcelain Tower of Nanjing had a base of 97 feet in diameter and rose up to about 260 feet. It was constructed with glazed porcelain bricks inside and out. There was no wood in the structure, except for a pillar at the tip. Glazed, colorful porcelain bricks were fitted together to form its structure, both inside and out. It was a rare structure of glazed construction.

Glazed porcelain was selected as the primary building material because of its brilliance and luster, which artistically reflected its splendor. 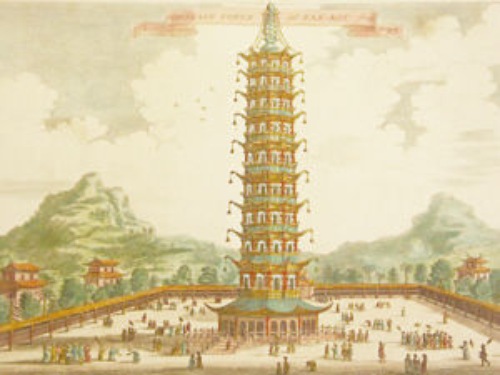 The Porcelain Tower of Nanjing, as it was drawn by ancient artists prior to its destruction in the 1850s during the Taiping Rebellion.

Artists first produced frescoes on the porcelain bricks, which included patterns of lotus flowers, divine beasts, and celestial beings among others. The bricks were then subjected to high temperature, which produced the colorful luster unique to the glaze. Each brick was not a single color. Instead, a multicolor glaze was used for its colorfulness. These bricks then were pieced together to form the tower.

Producing glazed frescoes is quite different from sketches on paper or oils on canvas. There was not the broad space as on the ceiling of the Sistine Chapel. It was artistically demanding to create figures and scenes on the narrow space of a brick. Despite the challenge, many enchanting scenes were produced. We are familiar with winged angels and winged horses in Western art. Yet few people are aware that these images were quite common in the glazed bricks that made up the Yongle Porcelain Tower. They included celestial beings with wings, flying celestial horses, divine beasts that looked like oxen with wings, majestic lions, domestic elephants, and lotus flowers and leaves. These images were lively and exquisite.

During ancient times, people pasted paper over their windows for light to shine through. Some wealthy families used fabric. Clam shells were used on the windows of the Yongle Porcelain Tower. Yes, clam shells. They were ground extremely thin to be able to filter the light. They were given the name “bright tiles,” and they were the best lighting material prior to the introduction of glass from the West. During the Ming and Qing Dynasties, the 260-feet tower was lit all the way to the top at night. Dreamlike lights filtered through the transparent clam shells, making it a fairy tale palace. It was seen from every corner in Nanjing, and its visual impact raised people's awareness of Buddhist culture.

Foreign diplomats were even more fascinated by the Chinese culture that the tower embodied. By the Qing Dynasty (1644-1912), the Porcelain Tower of Nanjing was widely known among the European aristocracy, many of whom considered it the dream of a lifetime to see its magnificence in person.

2. The Beauty of Blue Glaze – The Taoist Architectural Complex in Mount Wudang 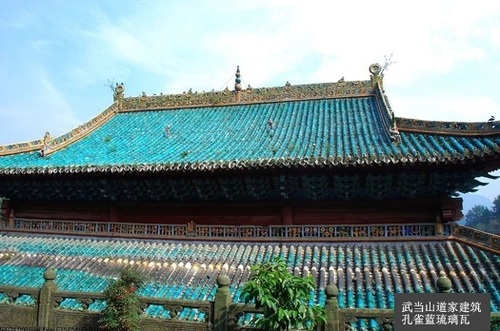 The Taoist Architectural Complex was constructed by decree of the Yongle Emperor. Glazed blue tiles were widely used in the construction. The peacock blue tiles of the roofs make these Taoist buildings stand out in the clean, quiet mountains. They accentuate Taoist magnificence. These buildings also feature layered eaves and painted pillars and beams, combining natural tranquility with exquisite magnificence. The scale of the Wudang Taoist Architectural Complex conveyed the popularity of Taoism among the Ming population. 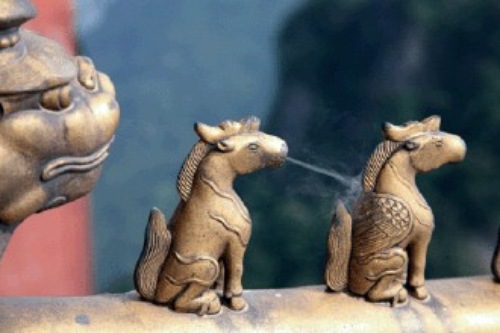 What is amazing are the horses on the spine of the Taoist buildings. The horses are winged and exhaling, which commands visitors' admiration and respect for the divine worlds.

Besides the glazed blue tiles, the architectural complex also features cast copper components coated in gold. The Golden Palace of Mount Wudang is the largest structure ever cast in copper up to that time and coated in gold. Despite its weathering for over 500 years of sunshine and storm, it remains as splendid as when it was first built.

The Golden Palace was pieced together precisely and solidly from metal parts. The design is comparable to the Porcelain Tower (pieced together from glazed porcelain). A single mismatch of a tiny piece would invalidate the construction of the entire building. Today people marvel at the ancients' wisdom, which, as a matter of fact, was inspired by divine beings.

3. The Beauty of Bright Yellow Glaze – The Forbidden City of Beijing

The Forbidden City of Beijing, built at the order of the Yongle Emperor, featured bright yellow tiles. Legend has it that heavenly palaces are a rich, blossoming world of palatial buildings and different structures like pavilions, towers, platforms, and balconies. The palaces, rails, corridors, and pavilions in the Forbidden Palace feature these characteristics of heavenly paradises. The grandeur of its buildings, the painted pillars and beams, and the colorful glazed tiles all convey an imperial magnificence.

The Yongle Emperor devoted more energy, time, and resources to construct the Porcelain Tower and the Taoist Architectural Complex than he did to build the Forbidden City for himself. A frugal Yongle Emperor, who abstained from liquor and wore patched robes, was diligent in managing the country. He cared about the average people, who prospered during his reign. He was willing to build the Buddhist Porcelain Tower of Nanjing and the Taoist Architectural Complex of Mount Wudang with the highest grade materials and the best designs, so as to exhibit the grandeur of Buddhas and Gods. It is only Buddhas and Gods who deserve the grandest of architecture.