(Minghui.org) “I'm from the former East Germany. Among the Chinese, it was the same as our [East German] rulers. They are afraid.” said Mr. Jörg Seefeld, director of the event department at the Stage Theater at Potsdamer Plaza, where Shen Yun is scheduled for four performances during March 23 and 26, 2014.

The Berliner Zeitung, a daily newspaper in Berlin, reported the above in its February 12 article “Chinese Embassy Tries to Block Dance Theater.” It compared the Chinese Communist Party's (CCP's) interference of Shen Yun performances with the arts censorship in the former East Germany and called it “Cold War at Potsdamer Plaza.”

Chinese Embassy official Chen Ping visited the Stage Theater to pressure the theater to cancel its contract for the four Shen Yun performances there. 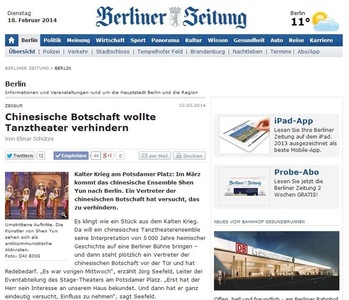 The February 12, 2014 article on the Berliner Zeitung, a daily newspaper in Berlin 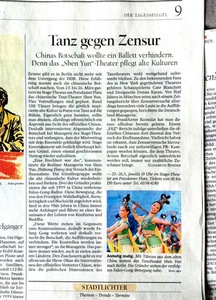 Der Tagesspiegel, the Daily Mirror, reported the interference as well

According to the report, the CCP has tried to interfere with Shen Yun performances in many locations in addition to Berlin. It did similar things five years ago in Munich. Media reported the censorship attempt, and more people went to see the performance as a result. Because of this, the Chinese consulate in Frankfurt abandoned a similar plan. 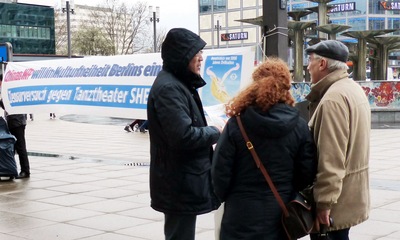 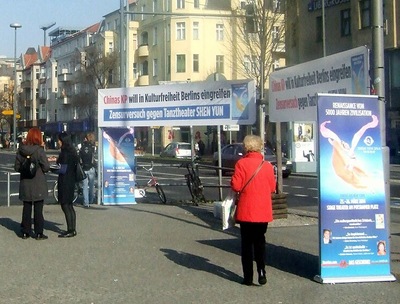 “What?! Are you talking about China? This really happened in Berlin? They tried to stop Shen Yun's performances here? This is outrageous!” Many Berliners share this sentiment when told about what had happened.

Falun Gong practitioners have set up sites on the street to expose the interference since March 18, 2014. Many passersby who viewed these displays were outraged by the CCP's interference. They said that as a result, they would go see the performance to support Shen Yun Performing Arts.

A policeman at the Alexander Plaza said to practitioners: “I support you. What they [CCP] have done was too much!” Another two policemen saw the Shen Yun trailer and commented: “This is so beautiful! What is the CCP afraid of?”

A teacher shared with practitioners: “I am originally from East Germany. I'm all too familiar with the communist tricks.” Many people who used to live in East Berlin expressed similar sentiments.

A lot of Germans asked how they could help Shen Yun. Practitioners told them: “The best way is to experience Shen Yun for yourselves in the theater. You will find out what the performance is about, and what the CCP is so afraid of. Say 'no' to the CCP with your actions.” Some of them also took extra copies of materials to spread the information.

Shen Yun Performing Arts is headquartered in New York. Its mission is to revive the divine-inspired Chinese traditional culture, and has successfully created a globally recognized presence. Meanwhile, the CCP has been trying to sabotage Shen Yun by diplomatic and espionage means all over the world. Germany has been no exception.

Two German corporations that partnered with Shen Yun received phone calls from the Chinese consulate in Frankfurt in March 2013. The companies refused to comply with the CCP's demand that they withdraw from the partnership. One company responded by saying, “We have freedom of speech in Germany. We decide what we want to do.”

In attempts to prevent Shen Yun from performing in Frankfurt, Li Haiyan, then-Consul General of the Chinese Consulate in Frankfurt, wrote to the Prime Minister of the State of Holstein, denigrating Shen Yun in the form of a state diplomatic letter, on January 6, 2009.

He also contacted consulates of other countries in Frankfurt, and lobbied them not to attend the Shen Yun shows. These attempts not only failed to stop the shows, but actually encouraged more people to see the shows. A German human rights organization exposed Li Haiyan's letter to the Prime Minister, which became evidence of the CCP's abuse of diplomatic power.

In March 2008, the local Shen Yun promoter, the Tonicale Concert Agency in Munich, was threatened by the Munich Chinese consulate. Tonicale first received harassing phone calls roughly every 10 minutes and then a personal visit from the Chinese vice-consul Wang Yanmin on March 11. Tonicale’s managing director was threatened that, if the show were not canceled, he might never be able to enter China again and the agency would be blacklisted from conducting business with Chinese partners.

Despite the pressure, the German agency held its ground and the shows were successfully held on schedule.

“Poland: Media Reports on Protest Against the “Bodies Revealed” Exhibit”