Poland: Media Reports on Protest Against the “Bodies Revealed” Exhibit

(Minghui.org) The Electoral Gazette (Gazeta Wyborcza) published an online article on March 12, 2014, the opening day of the “Bodies Revealed” exhibition, reporting on questions posed by Falun Gong practitioners regarding the source of the bodies.

Practitioners who joined the protest in front of the Industrial Chemistry Research Institute in Warsaw, the venue of the exhibition, strongly demanded that the Polish government investigate the source of the bodies, conduct DNA examination of the corpses, and stop any crimes and human rights violations committed under the name of “scientific education.”

Falun Gong practitioners in Poland protest in front of the Industrial Chemistry Research Institute in Warsaw, Poland, and call for an investigation of the bodies at the exhibition. The banner says: “Disclose the Truth of These Chinese Bodies, Show Documentations of Donations, Conduct DNA Tests to Prove that These Bodies Are Not Those of Dissidents.” 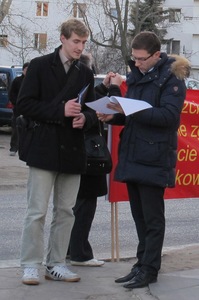 The report states that the over 200 bodies in the exhibition at the Industrial Chemistry Research Institute in Warsaw mainly come from China. Such an exhibition of dead bodies and organs angered the Polish Chinese on the first day. Polish Falun Gong practitioners also wondered if those bodies came from Chinese dissidents killed by the Chinese Communist Party (CCP).

The bodies belong to Premier Exhibitions, a U.S. company. The presenter is the JVS Group from the Czech Republic. The Industrial Chemistry Research Institute in Warsaw provided the venue. The exhibit runs from March 12 to the end of June.

According to the report, even though the JVS Group is licensed to run such an exhibition, it cannot answer the following questions: Who are these dead bodies? What happened to them? How did they die? Nor could the JVS Group show any certification of these bodies' donations.

The New York Times reported on May 29, 2008 that Premier Exhibitions Inc. warned visitors during the human body exhibitions that “what you're going to see may come from prisoners persecuted and executed in China.” It directly pointed out that the source of the bodies was from Chinese police.

It has been widely speculated that plastination is the next step for the dead bodies of Falun Gong practitioners whose organs have been harvested for profit, a crime exposed across the globe. Many governmental agencies, including the European Parliament, have passed resolutions to condemn this atrocity.

Upon visiting the same 2013 exhibition in Vienna, Virginia in the United States, Ethan Gutmann, one of the subject matter experts on the issue of organ harvesting, wrote for the Weekly Standard : “... in Vienna I’m noticing that the liver and kidneys appear to be missing from some of the plastinated bodies on display. Is it conceivable that there were dual-use bodies, the organs harvested before plastination? And could those kidneys and livers still be alive inside aged Chinese and Japanese, Europeans and Americans?”