(Minghui.org) Today's news from China includes incidents of persecution that took place in 11 cities or counties in 5 provinces. According to this report, 27 practitioners were subjected to mistreatment during their detention, and at least 5 practitioners were illegally arrested. 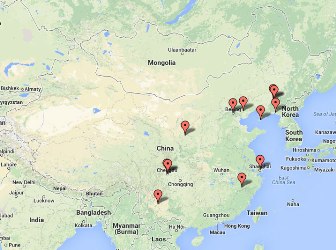 Mr. Tan Bobai was arrested around December 20, 2013. He has been held in the Dandong City Detention Center for over a month.

Ms. Wang Sufang, 64, was a police officer with the Fushun City Police Department. She has been arrested and detained many times for practicing Falun Gong.

Ms. Wang was arrested while distributing Falun Gong materials in the Xinfu District, on the afternoon of December 5, 2013. She was taken to the Fushun Nangou Detention Center.

Ms. Xu Chunxia, Ms. Wu Shuli, and Ms. Yu Zhenyan, from Wanghua District, were arrested for distributing Falun Gong materials by the Wangjia Police Station on December 8, 2013. Ms. Xu's home was ransacked. Ms. Yu's home was also ransacked on the afternoon of December 10, 2013. The three practitioners were taken to the Shenyang City No. 1 Detention Center in the early morning of December 9.

Ms. Lu Airong, from Pudong District, was taken to a court hearing on January 16, 2014. She was sentenced to three years in prison, with three year suspended.

Ms. Zheng Li was arrested while talking to people about Falun Gong on January 24, 2014.

Mr. Peng Shucai was arrested on January 22, 2014. He is now being held in the Qian'an City Brainwashing Center. Four officers, one with the last name Liang, ransacked Mr. Peng's home on January 24.

Ms. Shen Jiafeng, 60, was arrested for distributing Falun Gong informational materials by the Yimen Police Station on the afternoon of January 26, 2014.

Ms. Miao was imprisoned from February 2004 to July 2005, including serving a 15-month term of forced labor at the order of the Huan County Police Department. In June 2012 she was sentenced to three years in prison by the Huan County Court.

Ms. Xu Jing, about 40, was arrested and tortured by the Guangfeng County Domestic Security Division. Officers used six electric batons to torture her, as a result Ms. Xu passed out.

Ms. Xu's computer, printer and Falun Gong materials were confiscated. The police also took three cell phones, which belonged to Mr. Li Shaogui who is nearly 70, and Ms. Zhuang Sancai, about 63. The officers ransacked the home of Ms. Zhou Juxian, in her 50s, confiscating 500 yuan worth of paper bills with Falun Gong messages printed on them. The officers took Dafa books from Mr. Zhou Fushuang, in his 60s.

Ms. Yang Yafei and Mr. Hong Yizhao were arrested on September 4, 2013. They remain in custody at the Jinniu Brainwashing Center.

“My Gratitude to Master for Saving Me from Misery”