(Minghui.org) Falun Dafa practitioners joined the Student Society Fair at the University of Arizona on February 5 to offer faculty and students an opportunity to learn about the practice. 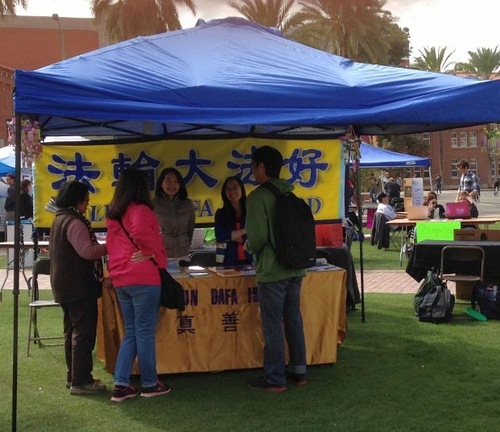 The Falun Dafa booth at the Student Society Fair, University of Arizona, February 5.

Practitioners participated in the event as part of the campus-based Falun Dafa Society. They set up a booth with informational materials and hung up a banner reading, “Falun Dafa is Good.”

Students from various parts of China visited the booth, eager to learn the facts about the spiritual practice, which has been persecuted and defamed by the Chinese communist regime for nearly 15 years.

One student said that his parents used to practice Falun Dafa, but stopped after the persecution started. He couldn't obtain objective information about the practice while living in China, but decided to learn the true situation upon leaving China.

After doing his own research, he determined that forced organ harvesting from imprisoned Falun Dafa practitioners—one of the many gruesome human rights atrocities committed by the Chinese regime—has indeed taken place. He decided to quit the Young Pioneers, an organization affiliated with the Chinese Communist Party (CCP), to distance himself from these crimes.

Another student came from Tibet. He asked a lot of questions about the practice, saying that his parents had told him to look for Falun Dafa practitioners in the U.S. and learn about this precious practice. He planned to read more online upon returning to the dorm after the fair.

One young man had studied in Hong Kong for half a year as an exchange student. There, he had seen Falun Dafa practitioners at tourist sites and witnessed how they were harassed by thugs affiliated with the communist regime. This prompted him to stop by the Falun Dafa booth at the fair to learn more about the persecution in China.