(Minghui.org) Ms. Tan Guanghui used to enjoy the peace and harmony of a loving family, but her environment changed when the Chinese Communist Party (CCP) launched a comprehensive persecution of Falun Gong in July 1999.

Ms. Tan went to Beijing in June 2001 to appeal for Falun Gong practitioners' rights to practice their belief. She was later illegally arrested and taken to the Wanjia Forced Labor Camp, where she was forcibly injected with nerve-damaging drugs. The guards threw her into a male cell where she was humiliated and tortured. One day, three guards took turns raping her. As a result, Ms. Tan suffered a mental collapse. 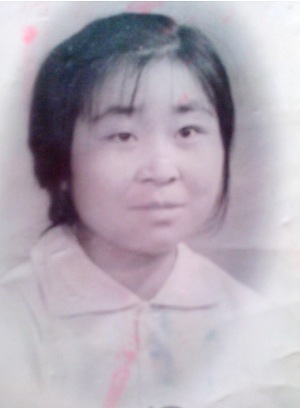 Ms. Tan Guanghui, before the CCP's persecution of Falun Gong

Ms. Tan is from Songjiang Town, Heilongjiang Province and worked as a salesperson in a local store. After the then-president of China, Jiang Zemin, ordered the persecution of Falun Gong, all Chinese media were instructed to slander and discredit the practice and its founder, Mr. Li Hongzhi. Ms. Tan was shocked and overwhelmed by the CCP's growing tide of lies about Falun Gong. She and her family knew that Falun Gong was good, because her body and mind had undergone profound changes after she began practicing in March 1998.

She and her 18-year-old daughter went to Beijing's Tiananmen Square in June 2000, to appeal for practitioners' freedom of belief. The two were taken away by police and imprisoned in a local detention center. After spending one month there, they were escorted back to Bin County by Wang Cong, a local police officer. Ms. Tan's daughter was very distraught over the whole ordeal, including the fact that the police extorted 3,000 yuan from her father before agreeing to release her.

Many Falun Gong practitioners were unlawfully detained in the camp. Guards instigated inmates to torture practitioners by offering cash incentives ranging from several hundred yuan to thousands of yuan. Ms. Tan Guanghui was repeatedly beaten, and tortured in various ways while imprisoned there. She later held a hunger strike for eight days to protest the persecution of Falun Gong practitioners in the labor camp.

"You’d better hurry up and write a guarantee statement to give up your belief,” the guards threatened her. “This order came from the top!”

Locked Up In a Male Cell

It was later discovered that the Langfang City Police Department in Hebei Province received a secret order from high-level officials to institute a two-step approach to forcing female practitioners into giving up their beliefs. The first step involved torturing, humiliating, then raping the practitioners. The second step involved torturing to death any practitioner who remained steadfast, with the cause of death being listed as “illness” or “suicide.”

As soon as each female practitioner arrived at the camp, teams of people worked together to brainwash her and force her to renounce her belief. Those who did not cooperate were subjected to brainwashing and solitary confinement, or close monitoring by groups of criminal inmates. Those who remained steadfast in their beliefs were sent to a male camp, where they were humiliated, abused, and brutally tortured, often to death.

Male guards were regularly dispatched into the female practitioners' cells. On May 24, 2001, Shi Yingbai, the deputy head of the camp, along with brigade captain Zhang Bo, ordered around 50 steadfast female practitioners to be sent to the male camp to be tortured. Tan Guanghui, Liu Fengzhen, Xie Jinxian, and others were tied and hung up by handcuffs, beaten, dragged on the ground, struck with electric batons, and forced to stand still from morning until night.

Tan and other practitioners later held hunger strikes to protest the torture. After a guard broke one of Ms. Tan’s front teeth, he moved her to a cell full of juvenile offenders. Ms. Tan introduced Falun Gong to the young girls and told them that if they remembered that Truthfulness-Compassion-Forbearance is good—they might be released early from prison for good behavior.

One day, Ms. Tan and over twenty practitioners were locked in a small room in the male ward of the camp. They sat huddled together on the cold, cement floor, with Ms. Tan sitting at at the end of a row of practitioners. At around midnight, a guard took her into another room, with several guards present.

At first, Ms. Tan did not know what the guards were up to. When she realized that they intended to do her harm, she warned them, “If you violate me, you will be committing a crime, and you will surely suffer retribution!” One of the thugs replied, “We don't care!”

The guards injected her with an unidentified drug, which caused her to lose consciousness. Shortly after, she felt drowsy and too weak to speak. She heard a man called “the chief” say to the guards, “She is almost your mother's age. Why do you mess with such an old lady?”

Ms. Tan made every effort to stay awake, but was overcome by the effects of the drug. She saw the guards raping her, but was too powerless to resist and too drugged to utter a word. In the darkness of the night, three guards at the camp gang raped her.

Testimony of a Few Insiders

Falun Gong practitioner A: “In 2001, about twenty of us were taken into a very cold, empty room located in the male ward of the Wanjia Labor Camp. We sat in the corner and huddled together for warmth. I sat next to Tan Guanghui, who was the last one in our row. When I woke up, I didn't see her sleeping next to me, I then dozed back to sleep. When I awoke several hours later, I saw Tan by my side. The next day, we asked Tan where she had gone the previous night.

She stared straight ahead, trembling, not uttering a word. 'Do you feel cold?' I asked. She appeared scared and did not answer me. We felt that something was dreadfully wrong with her and watched her very carefully. She seemed afraid to speak, and avoided people's eyes. A few days later, Tan became a little incoherent, with a frightened look on her face. We learned that she had been injected with toxic drugs on June 20. The guards were keeping her under close watch. One day, she suddenly jumped out of the cafeteria's second story window and landed on top of a metal awning, directly under the window. If it hadn't been for the awning, she might have died from the fall.”

Falun Gong practitioner B: “When I was about to be released from the Wanjia Labor Camp, a fellow practitioner told me to expose the fact that three guards had gang raped Tan Guanghui in the male ward. 'Are you sure?' I asked. 'Absolutely,' she replied. 'Tan is a very steadfast practitioner and refused to give up her belief.'”

Falun Gong practitioners C: “After Ms. Tan was raped, the guards were afraid that their crimes would be exposed. Thus, they intentionally smeared her reputation, saying that she was 'mentally ill' and accused her of trying to commit suicide on several occasions. As a result, they created a false reason to put Tan in solitary confinement at the camp hospital, and forbade other practitioners from coming in contact with her. In addition, she was given injections every day to make her sleep. After Tan Guanghui woke up she shouted 'Falun Dafa is good!' She was later forced to sit on the iron chair, which was located in the hallway. I was sometimes able to exchange a few words with her during meal times. She told me that the prison hospital had been administering a drug to her that induced a state of euphoria. She also said that she had been repeatedly raped by the guards. Through the limited contact that we had with each other, I found her mind clear and sound. Later, the prison doctor directed some inmates to tie her to a bed, in order to prevent her from walking around.”

Tan’s husband was notified by the Bin County 610 Office a few days later, on July 15, 2001, that his wife had suffered a mental collapse. He was asked to take her home. When Tan’s husband arrived at the Wanjia Labor Camp, he noticed that his wife was acting a little strange. When he called out her name, she kept her head bowed down and did not speak to him. The guards extorted 900 yuan from him before releasing her.

He was not provided with any medical records regarding his wife's condition, nor any other paperwork. In addition, he was unaware that his wife had been injected with toxic drugs that damaged her central nervous system, so when the effects of the drugs began to wear off and she was on the verge of death, he was very confused and worried. Actually, the labor camp was well aware of what would happen to her when the drugs wore off, which is exactly why they called her husband to take her home when they did.

By the time Ms. Tan's husband arrived home with Tan, she was already exhibiting symptoms of insanity. She had no concept of home or time, and did not recognize her colleagues, friends, or family. People felt sorry for her when they saw her running around outside during the day and night. 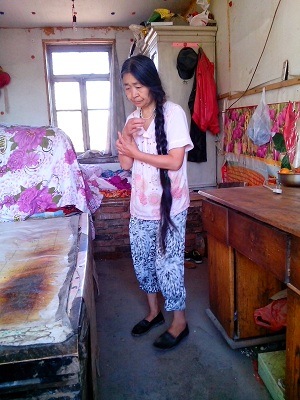 Tan Guanghui walked back and forth incessantly in her tiny bedroom. 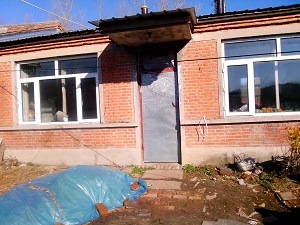 The exterior of Tan Guanghui’s home.

Once, when the family was eating lunch, Tan walked outside wearing slippers, and disappeared from sight in no time. Her husband and six of his relatives scoured the area for her. On the third day, Tan was found but was barely recognizable. She was barefoot, had a few egg-sized lumps on her face, a large bruise on her hip, and her big toe was broken. When she was asked what happened, she said that she had fallen from a cliff.

She would sometimes open the washing machine, pour water inside with a bowl, then take the water out of the washing machine, pour it on the floor and then jump barefooted into the puddle of water. A relative once went to visit Tan and asked her daughter, “Where is your mother?” The daughter said, “In the basement. We can't get her to come upstairs.” The relative went to the basement and saw Tan catching small insects and eating them. She also sometimes ate potato sprouts. Seeing Tan’s condition, her husband had no choice but to admit her to a psychiatric hospital in Min Zhu Township, Harbin City, for one month. When she returned home, he had not seen any noticeable improvement, so he admitted her again for another 30 days.

Under the attentive and loving care of her husband, Tan occasionally came to her senses. Sometimes when Tan ran into an acquaintance, she would blurt out, “There are no words in the human language to describe the criminal actions perpetrated by the Wanjia Labor Camp guards!”