(Minghui.org) Falun Gong practitioners from all over Europe held a series of events in downtown Madrid last weekend to raise awareness of the suppression of Falun Gong in China. The events included a rally in the afternoon on October 3 and a march, rally and candlelight vigil on October 4.

Nieves, an economist working for a law firm in Madrid, Spain, saw the parade and became interested. She attended the rally and was touched by severity of the human rights violations. With tears in her eyes, she said to a Minghui correspondent, “I know the hardship you are facing, especially when dealing with such a powerful regime. But I also know that, you will succeed regardless of the difficulty.” “We thank you for coming here and we support you!”

These events were followed by a conference, the 2014 European Falun Dafa Cultivation Experience Sharing Conference, on October 5. Practitioners from 35 countries attended this annual event.

Raising Awareness By Asking for Signatures on a Petition

Practitioners gathered at the Puerta del Sol, ("Gate of the Sun"), Madrid's most famous and most central square in the afternoon on October 3. Seeing the peaceful exercises and posters the described the brutal persecution, many people stopped to sign the petition. 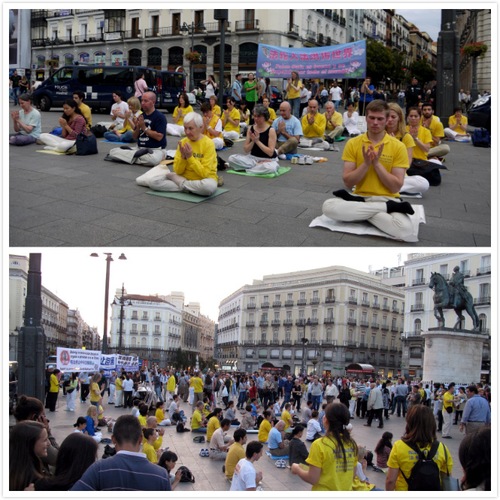 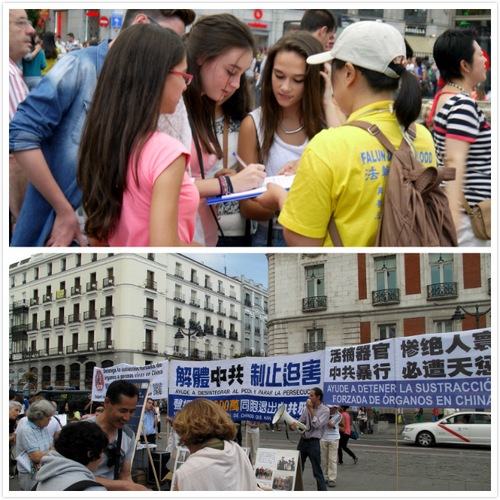 “I know this is real and international society has been trying to stop it. We [physicians] have also made such requests to the Chinese government.” He said that a large number of organ harvest cases had occurred. And they were from people who were imprisoned, not volunteer donors. 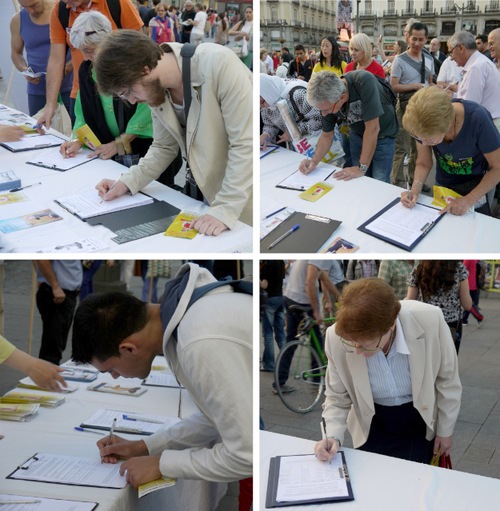 “You have done well because everyone in this society needs to be aware of this [forced organ harvest],” Neumann said to a practitioner. He said he was aware of the resolution European Parliament introduced last December to oppose the organ harvesting in China. “As a medical professional, I will work with my colleagues to help you stop this [organ harvest]. We will do our best.”

About 1000 practitioners participated in the parade and march on the morning of October 4, 2014, from the Plaza de la Independencia (Independent Square) to the Puerta del Sol. Many were surprised to hear about what happened in China and said they supported practitioners for their efforts.

Joanna Fons and Gaterin, two college students majoring in naturopathy and journalism, respectively, accepted the pamphlet given by a practitioner and read it. They said persecution such as organ harvesting is horrible and disturbing. Fons said, “The march you put on today looks great, especially the theme of peaceful resistance. It is something very meaningful.” Gaterin agreed with her, “Marches like this are a very good way to expose these atrocities so that more people learn about them.” They both asked what they could do to help. 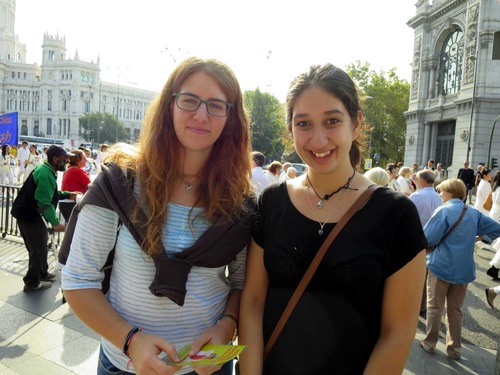 Joanna Fons and Gaterin, two college students majoring in naturopathy and journalism, supported practitioners during the march on October 4

Nieves, who worked for a Madrid law firm on Judicial certification said her two children had been to China for study in the past. “They told me people in China had no freedom or human rights. Now I believe them.” Nieves said her family left Spain for Paris when she was young, she was aware of the history when Spain was under dictatorship for 36 years. “That is why as soon as I returned to Spain at the age of 19, I reminded myself to fight for freedom.” “It is true that some Western nations have yielded to the CCP for financial reasons, but Chinese people will wake up.” “And you, Falun Gong practitioners, represent future of China.” 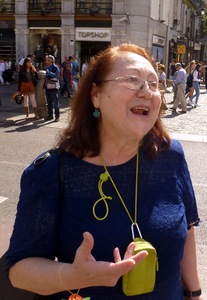 Nieves, who worked for a Madrid law firm on Judicial certification, talks to practitioners

A rally was held at the Puerta del Sol following the march. Several guests gave speeches.

Carlos Iglesias, a human rights attorney who sued Jiang Zemin for persecuting Falun Gong, spoke at the rally in the afternoon on October 4, 2014

In his speech, Carlos Iglesias, a human rights attorney who sued Jiang Zemin for persecuting Falun Gong, mentioned the resolution that European Parliament introduced last December opposing the organ harvesting in China. Iglesias said the resolution called upon China “to immediately end the practice of organ harvesting from prisoners of conscience and members of religious and ethnic minority groups.”

It also “demands an immediate end to the 14-year persecution of the Falun Gong spiritual practice by the Communist Party of China, and the immediate release of all Falun Gong practitioners and other prisoners of conscience.” (Additional information)

Iglesias thanked audience members for coming to this event, “I sincerely hope you could keep this important message in your heart, bring it home, and pass it onto your family and friends.”

“Many people have died or are still suffering for their belief, although they did nothing wrong. We need to work together to help them and stop this human rights violation, towards freedom.”

Wu Wenxin, trustee for International Society for Human Rights, pointed out that the Chinese Communist Party (CCP) has been persecuting Chinese people since it took power 65 years ago. “This include the suppression of intellectuals, Tibetans, pro-democratic activities, and Falun Gong practitioners.”

Harold King, European spokesperson for Doctors Against Forced Organ Harvesting (DAFOH), is a dentist from France. He started to notice the organ harvest issue when he was treating some of his patients who had received organ transplantation earlier. He was pleased that Spain was the first nation that passed a law to prevent its citizens from going overseas for organ transplantation.

“Recently we have talked about terrorism, but the CCP has been killing innocent Falun Gong practitioners and selling their organs for profit. Even at the rate of 10,000 per year, this atrocity is very severe and we have to stop it.” He said the CCP had a comprehensive organ supply system that connected patients to hospitals and military. “When this was exposed in 2006, the CCP promised it would change. But nothing has changed so far.” He called on everyday to sign the petition to condemn the atrocity.

A candlelight vigil was held in the evening on October 4 at the Plaza de Callao, mourning 3,795 practitioners who had died as a result of the severe persecution. 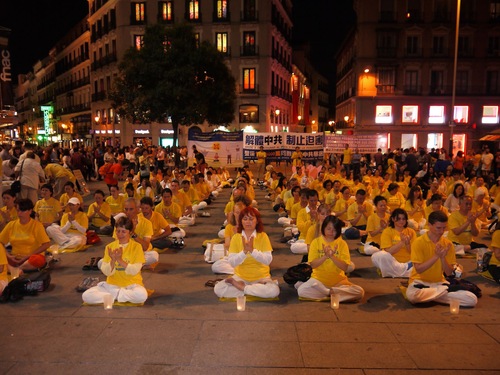 A candlelight vigil in the evening on October 4, 2014

Many residents and tourists stopped by, listening to speakers, reading posters, and coming up to sign the petitions. Some of them took pictures and told practitioners, “You are doing an important thing. Thank you for telling us.” “We support you. Keep it up!” 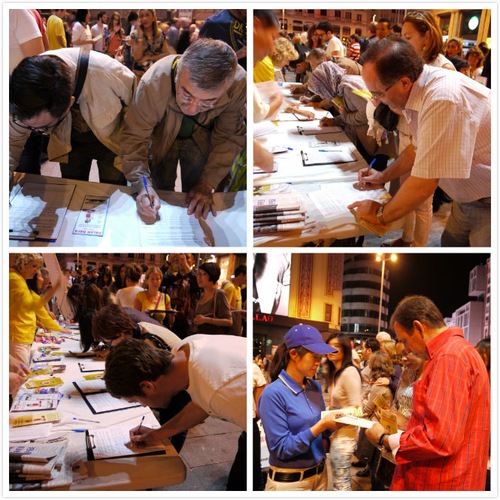 Residents and tourists signed petitions at the candlelight vigil site

“Dutch Police: "We Want to Learn to Practice Falun Gong, Too!" (Photos)”

“A Scene in a Dream: Hurry up and Return to Dafa”