Six Generations of Retribution versus 800 Years of Blessings

(Minghui.org) This article presents two stories from China's rich history. The first tells of six generations of retribution following an emperor's misdeeds, and the second tells of 800 years of blessings following a descendent's good deeds.

Legends like these illustrate what the ancients learned about the difference in outcomes that come from bad deeds versus good; lessons that have been passed down through history, but are easily forgotten in the whirlwind of modern society.

The first story talks about the Emperor in the Song Dynasty. Regardless of his imperial powers, the ancients believed that he brought retribution to himself and the following five generations. The second story tells how one person's good deeds entitled his family to have blessings for 800 years, defying the traditional belief in China that wealth couldn't be retained for more than three generations.

Some officials in China continue to brutally persecute innocent Falun Gong practitioners, good-hearted souls who follow the principles of Truthfulness-Compassion-Forbearance as the foundation to their practice.

If the moral principles that these stories illustrate are true, then one can only wonder: By persecuting Falun Gong and encouraging others to follow, aren't these officials inviting the consequences of their misdeeds to come back not only to themselves, but also to their coming generations?

The Song Dynasty (960-1279) was a special era in Chinese history. Invaded by the Jurchens with the royal family kidnapped as slaves, it was forced to move the capital to southern China. While the series of disgraceful events were often attributed to the nation's poor military forces, some felt they were retribution for the bad deeds committed by Emperor Taizong of Song, Zhao Guangyi.

Zhao Guangyi's older brother was the founding emperor of the Song Dynasty (the brother's name was Zhao Kuangyin, where “Zhao” is the family name, and as is customary in China, the family name precedes the given name).

Zhao Guangyi wanted to seize power from his brother, so he carried out a series of nefarious plots. He killed his older brother, Emperor Zhao Kuangyin, as well as his nephew, the Emperor's son and heir to the throne. He also killed his own younger brother, all in attempts to clear the path to becoming Emperor himself.

Not stopping there, Zhao Guangyi also killed King Li Yu, but not before raping his wife. King Li Yu was the final king of Southern Tang, one of the Ten Kingdoms in south-central China created following the Tang Dynasty from 937–975. It surrendered and became part of Song Dynasty in 975.

To cover up these terrible deeds, not to mention his other transgressions, once he became Emperor Taizong of Song, he ordered historians to alter the official records.

What Emperor Taizong of Song did not foresee, however, was that retribution was soon to follow.

His first son had a mental disorder and his second son died. His third son, Emperor Zhenzong of Song Zhao Heng, did survive, and inherited the empire. But Emperor Zhenzong's numerous children died one after another.

Emperor Taizong of Song was left with no grandson to inherit the throne, so his son had to adopt a nephew. Three generations later, the Jurchens invaded. The royal family—offspring of Emperor Taizong of Song—were kidnapped as slaves, and their wives and daughters were forced into prostitution.

Only Emperor Gaozong of Song Zhao Gou escaped. He returned, moved the capital south, and continued the Song Dynasty. He had no children.

Instead of seeking out any offspring of Emperor Taizong of Song to be his successors, he found someone in the Emperor's elder brother's family tree. Thus he rightfully returned the power back to the murdered emperor's ancestral line, and the retribution came to an end. 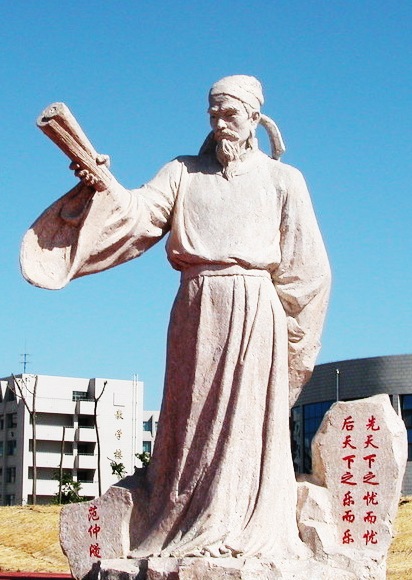 Born into a poor family, from childhood Fan Zhongyan studied hard. He became an official and had a reputation of always being kind and considerate of others.

He was later appointed as the head of Xinhua County in Jiangsu Province, and it was at this time that an unusual tide came in from the sea one day. More than 100 people were killed as a result.

To prevent such a tragedy from happening again, Fan personally stood in the high tide, directing construction, and soon a one-hundred-mile-long dam was built. Because the dam saved lives and helped farmers as well, people named it after him to express their gratitude.

At times, Fan considered imperial orders to be extreme or inappropriate so he refused to follow them. He was thus demoted four times.

He later took the lead in defending the country when the Western Xia invaded. His efforts worked and peace was restored.

The entire nation mourned Fan when he died of illness and even the Western Xia grieved his loss.

Always a generous person, Fan liked to help others. When he died, he left little money to his family. However, he left his offspring a priceless legacy. His high moral standard and uprightness blessed later generations in his family.

Like Fan, his son also became a chancellor, the highest-ranking official in the imperial government in ancient China. His offspring were renowned for more than 800 years until early 20th century.

“14 Years of Peaceful Resistance: Falun Gong Sows the Seeds for the Return of Good Values in China (Part 3)”