I Was Subjected to the "Anchor Torture" in Gangbei Prison

(Minghui.org) Falun Gong practitioner Mr. Zhou Xiangyang was tortured with the “anchor torture” for four months in Gangbei Prison (now renamed Binghai Prison) in Tianjin. Mr. Zhou, an engineer at the Third Survey and Design Institute of Tianjin, was illegally sentenced to nine years in prison because of his belief. Another practitioner, Li Xiwang, died from the “anchor torture” in November 2011 in the same prison. 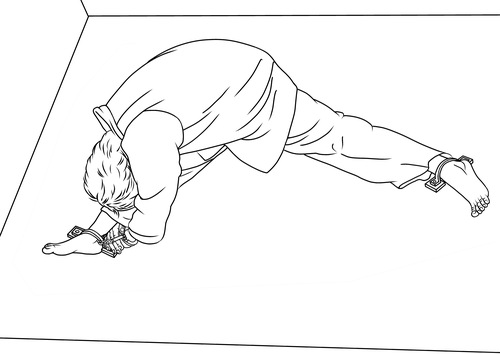 In the “anchor torture,” the victim's hands and feet are anchored to metal rings in the floor. The victim's legs are split apart at a 130-degree angle, and both hands are pinned to another ring under a foot. This position causes the victim to be in constant pain. The victim is forced to stay the same position around the clock for several weeks or even several months. It's an extremely brutal torture method.

Mr. Zhou was released on April 1, 2012. Here is his own testimony about what happened to him in Gangbei Prison.

The confinement room is a ghastly and bloodcurdling place, located near the prison gate. There is a big room in the shape of a triangle, with iron rings anchored to the floor, and a huge light bulb hangs in the middle of the room. I was told that this torture method is called “anchor torture.” The victim is pinned to the ground with a huge light bulb directly over his head, keeping the victim awake all day. This torture is extremely cruel.

I was subjected to the “anchor torture” for the first time in December 2005.

I was sent into a big room which was split into several small rooms, and several prisoners from the same prison wards were waiting for me. I knew that they had a premeditated plan.

I noticed a few days before that these prisoners kept looking at me and talking in whispers. A labor competition was held in the No. 5 Ward to check how much work a prisoner could do until they reached their limit. The prison could thus assign as much work as possible. For a meager reward, a prisoner would exert himself to the utmost. Every time the competition was over, they turned up the ratio and used it to slander Falun Dafa.

After being forced to work for the prison’s benefit all day, practitioners were made to sit on small stools and not allowed to sleep. Even though were were exhausted, were were forced to listen to audio broadcasts which slandered Falun Dafa. In addition, were were subjected to beatings, insults, and were tortured in other ways, including the “anchor torture.”

I could endure such abuse, and planned to argue with them. I protested being brainwashed, and they stopped it temporarily. However, they soon resumed using the torture method, and everything was planned by a vicious guard named Zhang Shilin.

When I walked towards the radio room, several prisoners directed by the guards rushed up to block my way. They made a big uproar, and guard Zhang Shilin blamed me, and asserted that I planned to sabotage the radio room.

Some prisoners later laughed at me, and said that I was fooled easily by Zhang Shilin. I knew they might do something dirty to me, and I had to resist falling into their trap.

I was taken to the room where everything was ready. Guard Wang Gang ordered prisoners to put me in manacles and fetters. Their facial expressions were strange, and their language was dirty. These prisoners had lost their sense of right and wrong. They defamed Falun Dafa continuously, humiliated me, and brutally beat me. Guard Wang Gang kept staring at them the entire time, without saying a word.

I knew that guard Zhang Shilin had arranged this in advance. After I was shackled to the ground, the prisoners said that I had been tricked by Zhang Shilin. I knew very well what they did was plotted in advance.

In the humid gloomy small room which was three meters in length and one meter wide, I lay on my back and tried to stretch out my arms, but the walls were so close I couldn't fully straighten them out. One overhead light bulb was kept on continually. My wrists were handcuffed to metal rings while my legs and feet hung suspended above the cement floor. The fetters were locked to the ground.

A prisoner sitting near my head monitored my movements. If I moved my hands a little, he stepped on my arms. Another prisoner controlled my lower back, and the third prisoner controlled my feet, keeping my feet hanging to enhance the pain. I could only close my eyes for three hours every day. At other times, I was beaten or brutally abused if I closed my eyes.

I was kept locked to the ground for many days. The sharp pains in my lower back, arms, and thighs almost killed me. It was crueler than being shocked with electric batons. In addition, prisoners kept beating and insulting me, and reading articles that slandered Falun Dafa.

Prisoner Zhang Bing sometimes threw a heavy book at my private parts. When I wanted to relieve myself, two prisoners dragged me suddenly and I cried out from the pain in my lower back. They claimed they were helping me. If they heard nothing inside, the two guards who were listening outside kept asking the prisoners, “Don't you want your sentence reduced?”

In order to meet the guards' requirements, the prisoners tried their best to torture me. They attempted to make me give up my belief and renounce Falun Gong in writing.

I was given no water or food for seven days and nights, nor was I allowed to sleep. Even when my sputum was filled with blood, they didn't stop torturing me.

On the eighth day, the guard brought a doctor and a nurse to check my blood pressure. At first, they used a digital device, but it didn't work. Later they used a high-accuracy one, and found my high-pressure was 50, and the low-pressure was 30. After they force-fed me, I was still kept locked to the ground in the small cell.

Ninety-seven days later when I was released, I saw that the shape of my body was left clearly on the floor and it was there for a fairly long time. I wasn't able to stand up for several months afterwards.

I heard that my case was being handled by a special team formed by prison head Guo Wei and two guards, Zhang Shilin and Song Xuesen. But their attempt to “storm the fortifications within 100 days” failed.

Tortured Again the Same Way for a Month

I was later transferred to Tianjin No. 1 Prison, where I was persecuted for over a year. I was transferred to Gangbei Prison on June 30, 2008, and assigned to the No. 9 Ward. Deputy head Song Xueshen subjected me to the “anchor torture” for a month.

In July and August, the confinement room was hotter than outside. One's entire body is covered in sweat after just half a minute in the room. Prisoner Wang Xinguang threatened to torture me to death while he stepped on my legs. He made a large hole in a window screen to let more mosquitoes in to torment me.

The guards changed the metal rings around, and arranged them in different patterns. When anyone came to inspect the prison, they removed these rings temporarily. I later heard that the shape was changed to a sitting position.

In 2011, I heard that prison head Li Guoyu told someone to focus on persecuting me.

On July 29, 2011, Falun Gong practitioner Mr. Li Xiwang was tortured to death by the “anchor torture” at Gangbei Prison.

He endured a crueler torture where both of his feet were anchored tightly into steel shoes on the ground, while both of his legs were tightly fastened in a steel barrel which was vertically welded to a ground plate. In addition, both hands were handcuffed to the ground. Mr. Li had to bend his back even while lying on the ground.

This intensified torture can cause the victim to die in agony within one or two hours. But Mr. Li had been locked up this way for over ten hours. He died in the middle of the night. According to some witnesses, the prison performed a game of “giving emergency treatment to a dead body,” in order to cover up their crimes.

For more details about the torture death of Mr. Li Xiwang, please see the Minghui article, " Mr. Li Xiwang Died in Agony as a Result of More than Ten Hours of 'Anchor Torture'"

During 2005 and 2006, my wife Li Shanshan tried to appeal again regarding the torture methods used in Gangbei Prison. But no action was taken, and they arrested her and took her to Banqiao Women's Forced Labor Camp. She was detained there for more than fifteen months, based on a false accusation made by guard Zhang Shilin.

My wife tried to appeal again in 2011, and was detained in the Hebei Province Women's Forced Labor Camp.

Mr. Li Xiwang was tortured to death in November 2011.

To force Falun Gong practitioners to give up their belief, some prisoners were promised reduced sentences or more freedom in prison if they beat or verbally abused practitioners and tortured them.

Once asked if he was worried about his future, guard Zhang Shilin said, “I thought the Chinese Communist Party (CCP) would go on for decades. Thus I dared to do whatever I wanted.” These guards lost the ability to distinguish between right and wrong, good and evil, and may do any evil thing imaginable.

When my family hired a lawyer to sue the prison for torture, the prison obstructed him in every possible way to prevent him from investigating the case. In addition, some related authorities purposefully glossed over the case, and it was not given the attention it deserved. Some practitioners are enduring the same torture in Gangbei Prison right now. I recently heard that practitioner Mr. Hua Lianyou was tortured almost to death, and the prison refused to release him.

My wife visited the Tianjin City Procuratorate, and asked about the status of investigating the crimes of Zhang Shilin, and later handed in an application letter for supervision over placing a criminal case on file. But the related authorities stalled for time and did not file the case.

Although over ten victims co-signed the letter of accusation, the related authorities ignored the statements and took no action. I provided names, dates, and details of how I was tortured in Gangbei Prison.

I urge the authorities to investigate how Falun Gong practitioners are tortured in Gangbei Prison and charge those responsible for the appropriate crimes.

“Cultivating with a Pure Heart Can Temper a Harsh Environment”