Organized by the Copenhagen City Council, the wildly popular event attracted over 35,000 visitors. This was the second time that Falun Gong practitioners were invited to participate in the festival.

Spreading the goodness of Dafa

The event kicked off with a colorful and lively parade. The practitioners’ float, exercise demonstrations, informational booth, and signature drive attracted a lot of positive attention. 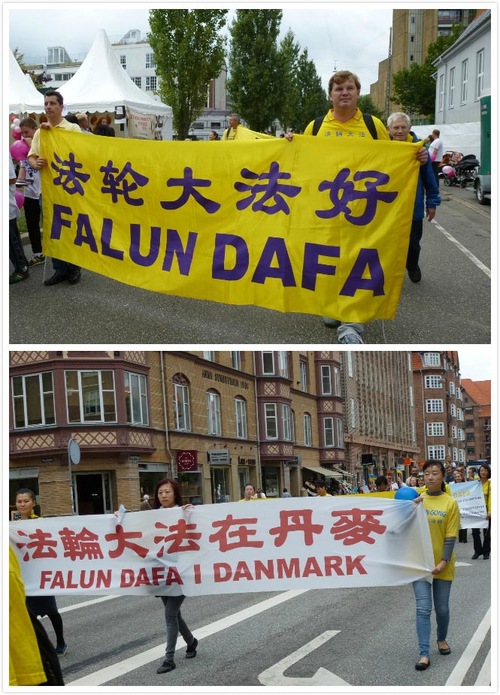 When eight Falun Gong practitioners went onstage to introduce the practice and demonstrate the Dafa exercises, a large crowd quickly gathered around.

The audience appeared very interested, and spontaneously followed along with the practitioners' movements, accompanied by melodic Dafa music playing in the background.

When the 25-minute introduction to Falun Gong ended, the practitioners were given a big round of applause. 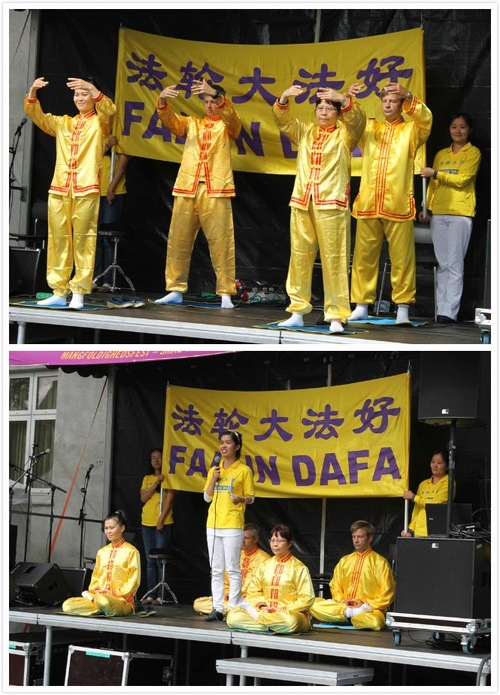 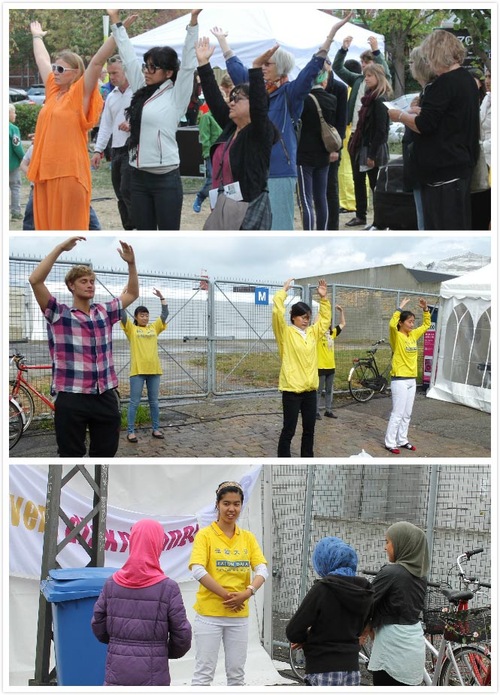 The exercise demonstration attracts many people

Many passersby were shocked to find out that the Chinese Communist Party (CCP) has been harvesting organs from living Falun Gong practitioners, whom they have been severely persecuting for over 14 years. They found it difficult to grasp why the international community has done so little to keep this immoral atrocity from happening.

People from all walks of life carefully read the practitioners' informational display boards, then signed the petition initiated by Doctors Against Forced Organ Harvesting, or the petition calling on Danish lawmakers to help stop the persecution of Falun Gong in China.

Several times during the day, so many people wanted to sign the petition that they had to wait in line. “Thank you for passing on this most important message,” said one man. “You are doing a great job. Keep it up!” 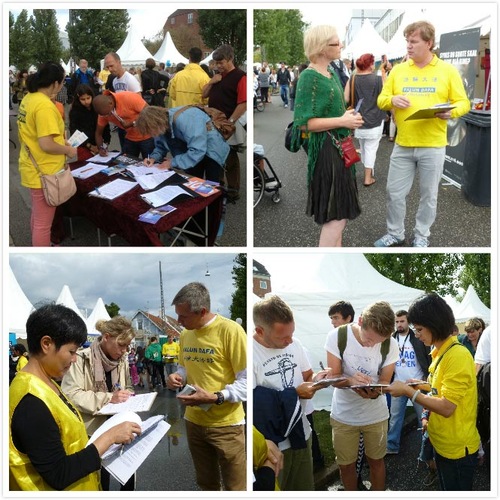 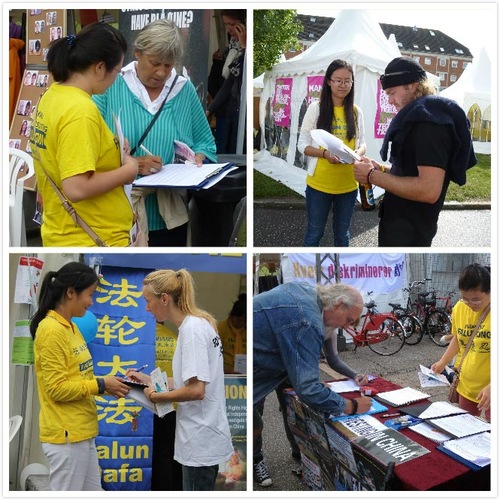 Passersby sign the petition in support of Falun Gong

“I'd sign this petition even if it affected my thriving business in China!”

A mother and three of her friends immediately signed the petition, showing their strong support for Falun Gong. When they saw two mutual friends of theirs pass by, they urged them to sign the petition form, too.

Before the group left, they asked for eight blank petition forms so that all of their family members could sign it, too. They promised that they would mail the filled-in forms back to the practitioners.

An elderly Danish woman and her two adult children stopped by the practitioners' booth. One of the sons said that they had just came back from a business trip to China. After finding out about the CCP's crimes against humanity, they immediately signed the petition.

“Even if signing this petition affected my thriving business in China, I would still sign it!” said the mother. “There is no need to worry,” a practitioner explained, “because the petition forms are sent directly to the United Nations, and the information contained therein is considered both private and confidential.”

A Danish woman carefully read through the practitioners' letter to her local Member of Parliament, then immediately signed the petition form. She suggested that Denmark enact laws preventing its citizens from going to China for organ transplantation. She said this would help prevent Danes from becoming unwitting accomplishes to the Party's murderous crimes against humanity.

When Gorm Anker Gunnarsen, a middle school teacher and a local non-incumbent MP candidate, found out about Chinese regime's utter disregard for life, he was aghast.

“These atrocities must be stopped,” he said. “One cannot sit idle while these crimes are talking place!”

Morten Lindberg, often referred to as “Master Fatman,” is a well-known Danish media personality. He signed the petition form then took a photo with a Falun Gong practitioner to show his support. 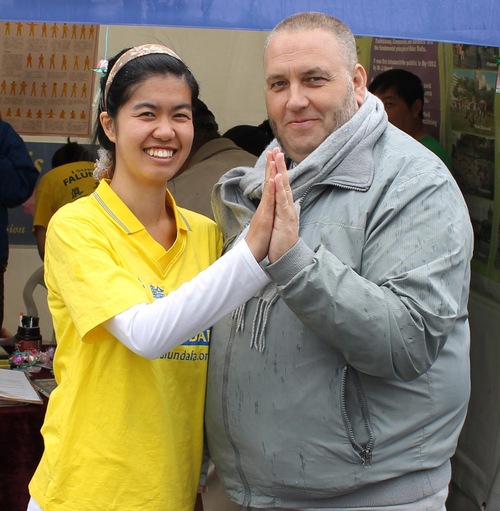 “I signed the petition today,” said Mr Lindberg in an interview, “because I wanted to call upon people to help stop the CCP's practice of forced organ harvesting, including from Chinese people and Tibetans.

“No human being would ever agree to have their organs stolen from them. But the Party wantonly extracts organs from one person then transplants them into another.

“This is horrible and evil, not only for those who had their organs forcibly removed, but also for the whole world. It’s terrifying!”

“Communism doesn't possess a spiritual side”

Mr. Lindberg shared his view on communism. “Communism looks good on paper, 'Wow, everyone is equal!' and everything is wonderful. But communism doesn't possess a spiritual side to its ideology. It only talks about things that can be seen, can be touched, like your sweater, my coat, a camera etc., but we all know that there's more to life than that! It seems like communism has forgotten this part completely.

“They have also forgotten about the feeling of love among people, the joy that a person feels when he or she meets others; they've forgotten all of this!”

The Communist Party “only thinks about self, self, self”

“I’ve been to former communist countries many times, like the Soviet Union and Czechoslovakia, and the only topic that Party members seem to discuss is how 'everyone in society is equal.' However, I think it's a sham. Actually, the only thing that they think about is themselves. They're very selfish!

“Since they only think about self, self, self, their actions differ greatly from their idyllic philosophy. They are completely opposite of each other. It’s very clear that the CCP persecutes Falun Gong because they don’t want others elevating from the material plane to a spiritual plane. They are scared stiff of this happening. Falun Gong and Tibetans are going through a very difficult period, but it won’t last long. The Party is destined to meet its natural end!”

“I Was Subjected to the "Anchor Torture" in Gangbei Prison”