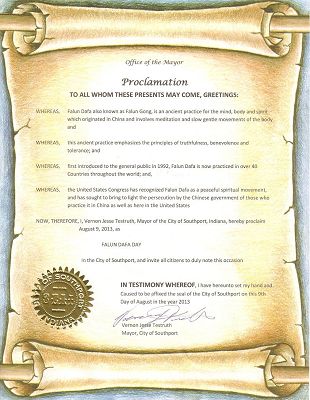 TO ALL WHOM THESE PRESENTS MAY COME, GREETINGS:

WHEREAS, Falun Dafa also known as Falun Gong, is an ancient practice for the mind, body and spirit which originated in China and involves meditation and slow gentle movements of the body; and

WHEREAS, this ancient practice emphasizes the principles of truthfulness, benevolence and tolerance; and

WHEREAS, first introduced to the general public in 1992, Falun Dafa is now practiced in over 100 countries throughout the world; and,

WHEREAS, the United States Congress has recognized Falun Dafa as a peaceful spiritual movement, and has sought to bring to light the persecution by the Chinese government of those who practice in China as well as here in the United States.

in the City of Southport, and invite all citizens to duly note this occasion.

IN TESTIMONY WHEREOF, I have hereunto set my hand and caused to be affixed the seal of the City of Southport on this 9th Day of August in the year 2013

“Once Glorified, Persecutor Gao Fei Has Now Been Abandoned by the CCP”

“Our Response to Persecution Incidents”