(Minghui.org) Falun Dafa practitioners gathered at the central square on the campus of the University of Michigan in Ann Arbor on July 20, 2013. The activities included demonstrations of the Falun Gong exercises, an introduction to Falun Gong and the persecution in China, as well as information on the forced organ harvesting. Many students, faculty, and passersby who learned the facts signed a petition supporting Falun Gong's efforts to stop the persecution. 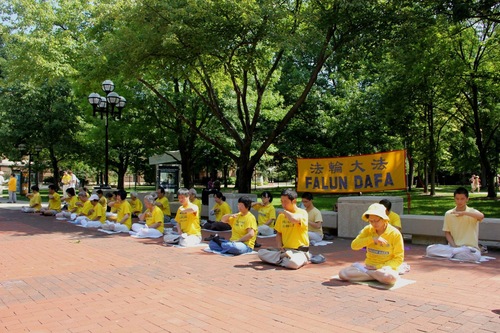 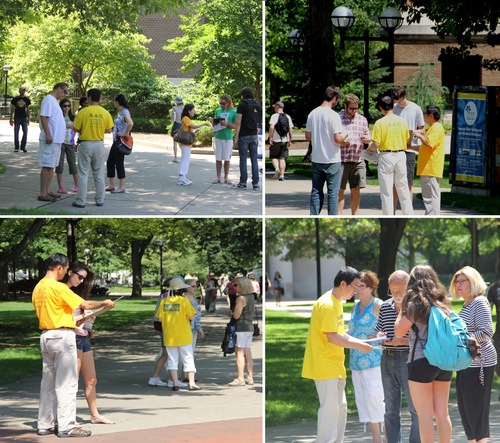 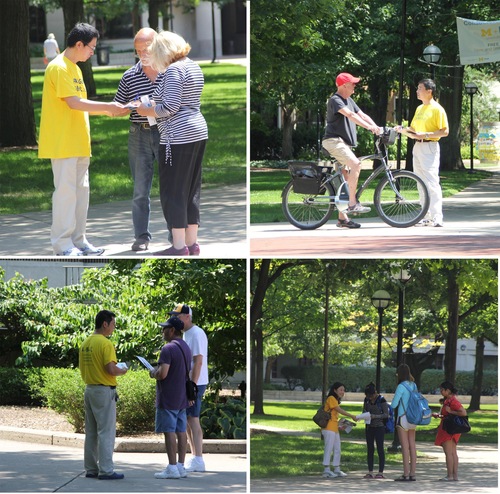 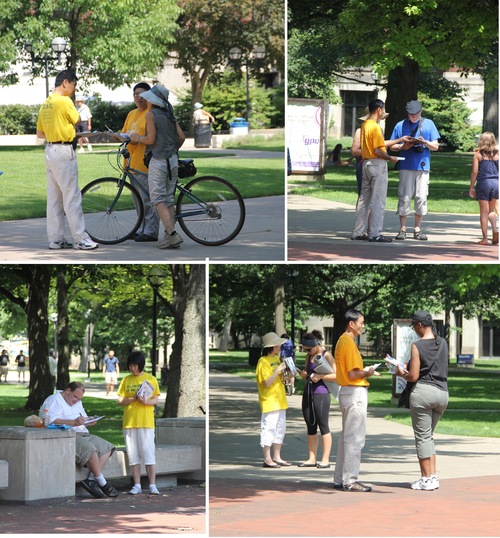 Signature drive calling for an end to the persecution

According to Dr. Xu, director of the Falun Dafa Association of Michigan, the signature drive supports the recent U.S. House Resolution #281 that asked that the Chinese Communist regime stop the forced organ harvesting from Falun Gong practitioners and other prisoners of conscience. “The Falun Dafa practitioners in Michigan wrote a short letter to express their concern about the crimes of forced organ harvesting, and invited fellow citizens to write to their representatives to co-sponsor the resolution,” Xu said. “The event was very successful. Many people signed their names to show their support.”

A scientist who does aging research was very interested to see that many of the older practitioners were very healthy and hear that some of them previously had terminal illnesses. A practitioner told her that the practice of Falun Gong can balance the body and keep one young. The scientist was surprised and said she had read about meditation and exercises, and now wanted to learn more about Falun Gong.

Ms. Marianne Shiff is a vice president of marketing and sales. After seeing the facts about forced organ harvesting, she said that she used to think it was just a rumor and that it couldn't be true. So when she saw the event, she realized that it was truly happening in China. "Being a U.S. citizen, I believe we need more information like today," she said. "If American citizens travel to China to get organs, they need to know the source of the organs."

Christina Mooney is a development supervisor of a foundation. She said, "I am surprised that it (forced organ harvesting) is still happening. We must be aware of it and learn more about it. We should have a policy to stop it. In America or any other country, it is the same issue. It should not happen." She thought there should be a national policy and that the United State should actively respond.