(Minghui.org) Falun Dafa practitioners held a truth clarification event on July 14, 2013, at the famous Dam Square in Amsterdam, the capital and most populous city in the Netherlands. They provided display boards, posters, and an large information booth.

Many of the city's tourists stopped at the booth and carefully read the display boards. When people learned about the persecution of Falun Gong in China, especially the Chinese Communist Party's (CCP) practice of harvesting organs from living Falun Gong practitioners, they were shocked, and immediately signed a petition calling for an end to this crime.

Some people said that they planned to tell their friends and relatives about the persecution in China and get the word out via various social networks. 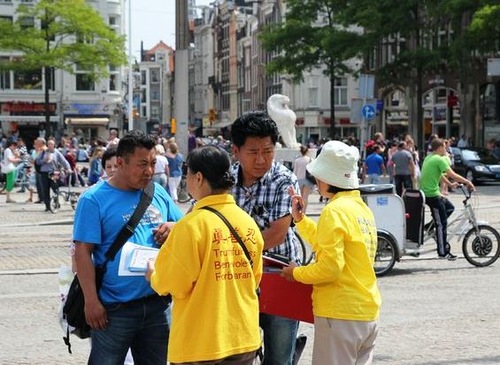 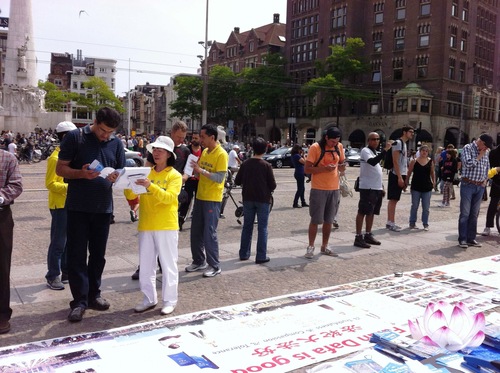 Passersby learn the truth about the persecution in China

Two young ladies asked a practitioner repeatedly, “Why would the Chinese regime want to persecute Falun Gong?”—They couldn’t believe that members of a peaceful meditation group were being ruthlessly persecuted, let alone having their organs ripped out of their bodies while they're alive!

One elderly couple signed the petition then asked for the website address of the online petition form. They said that their son was a well-known DJ and has many fans in his social network. They planned to ask him to tell everyone he knows about the Chinese Communist regime's heinous crimes of organ harvesting, and why it must be stopped.

Some people offered to donate some money to help the practitioners who had been persecuted. A practitioner thanked them, then explained that Falun Gong does not accept donations. “If you would like to help,” he said, “please tell everyone in your immediate circle that Falun Gong is being persecuted simply for holding steadfast to the principles of Truthfulness-Compassion-Forbearance.”

A large group of Chinese tourists and local Chinese came over to read the display boards. They took a lot of pictures and talked to the practitioners about the persecution.

One Chinese man quietly listened as a practitioner explained the facts about Falun Gong. After signing the petition to show his support, he carefully read over the informational display boards.

An overseas Chinese student, who works in Amsterdam, said that he was shocked to learn of the CCP's involvement in organ harvesting. He told the practitioner that he will learn more about the matter when he returns home.

One practitioner, who always participates in July 20 Falun Gong commemorative activities, said that he was moved by the righteousness displayed by sentient beings after they learned about the persecution.

He hopes that those Chinese who don’t have the courage to learn the truth should at least take a rational look at the facts, not oppose Falun Gong, and thus make the right choice for their future.

“Japan: Protesting the Persecution of Falun Gong in Front of the Chinese Consulate in Osaka (Photo)”