Canada: City of Kamloops Proclaims May 2013 as Falun Dafa Month 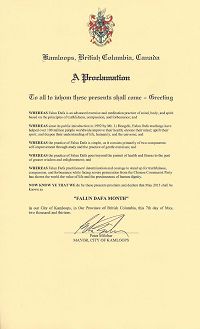 To all to whom those presents shall come – Greeting

Whereas Falun Dafa is an advanced exercise and meditation practice of mind, body, and spirit based on the principles of truthfulness, compassion, and forbearance; and

Whereas since its public introduction in 1992 by Mr. Li Hongzhi, Falun Dafa teachings have helped over 100 million people worldwide improve their health; elevate their mind; uplift their spirit; and deepen their understanding of life, humanity, and the universe; and

Whereas the practice of Falun Dafa goes beyond the pursuit of health and fitness to the goal of greater wisdom and enlightenment; and

Whereas Falun Dafa practitioners’ determination and courage to stand up for truthfulness, compassion, and forbearance while facing severe persecution from the Chinese Communist Party has shown the world the value of life and the preciousness of human dignity.

In our City of Kamloops, in our Province of British Columbia, this 7th day of May, two thousand and thirteen.