(Minghui.org) A sudden gust and hail engulfed Montreal's Chinatown on the afternoon of April 20 2013. The display boards flapped in the wind and hail pelted down on the Falun Dafa practitioners seated on the ground, however no one moved to take shelter. It was almost like a metaphor of the 14-year-long persecution of Falun Gong, whereby the Chinese Communist Party tried to eradicate the practice with all means, but Falun Gong practitioners peacefully resisted the illegal persecution and reached out to raise awareness to the world's people. 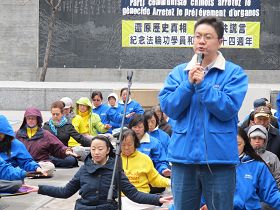 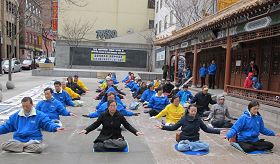 Falun Dafa practitioners of Montreal, Canada rallied in Chinatown, appealing to the overseas Chinese to recognize the evil nature of the Chinese Communist Party and help end the persecution.

“It is just a matter of when it will collapse. It will fall quicker when more of its evil nature and deeds are exposed, such as harvesting organs from living Falun Gong practitioners and torturing practitioners in Masanjia Forced Labor Camp. If we expose them, it will collapse soon. The communists say one thing, but do the opposite. They murder, and then cover it up. They produce fabricated news to deceive the people. They always do the opposite of what they promise. For example, they said they liberated the country, but in reality they enslaved the country; they promised to give Chinese people the freedom to think and speak, but they have actually brainwashed the public. They said they saved the people from the exploitation of capitalists and landlords, but in the end the Communist Party became the largest capitalist and landlord.”

Zhang expressed his respect to Falun Gong practitioners for their decade-long endeavors.

Mr. Su from China said, “From the April 25 Grand Appeal to the decade-long peaceful resistance to the persecution, I can see that Falun Gong practitioners are of a high caliber. I believe it is because they follow the principles of Truthfulness, Compassion, and Forbearance. They endured so much to keep their faith.”

He then mentioned the recent reports on tortures that take place at Masanjia Forced Labor Camp, “The mouthpieces of the Chinese Communist Party recently exposed the tortures in Masanjia. But they later tried to deny everything and said this was due to 'serious dereliction of duty'. No, this is not dereliction of duty. The truth is much worse than it had exposed.”

Many Chinese took this opportunity to withdraw from the Chinese Communist Party and its affiliated organizations at the rally. One man about 50 years old who had escorted an older man to the bus station, saw the rally on his way. After listening to some information presented to him, he immediately quit the CCP.

Another Chinese man who came to Canada a short time ago walked directly to the Quit the CCP Service table and asked to quit the Young Pioneers (an organization affiliated with the CCP). After completing the registration using a pseudo name, he took copies of various truth-clarification materials and immediately began reading them.

A practitioner offered a free copy of the Nine Commentaries on the Communist Party to a Chinese couple who were walking near the rally. They said that they had already read the book and had withdrawn from the CCP and its affiliated organizations. While leaving, they said, “We support you!”