(Minghui.org) On April 20, Falun Gong practitioners from Edmonton, Canada, held a rally at a local park, commemorating the 14th anniversary of the April 25 Appeal. Practitioners set up banners and display boards, passed out flyers, collected signatures, and demonstrated the meditative exercises. 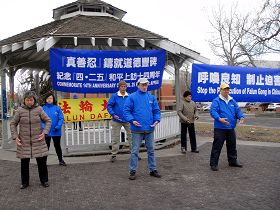 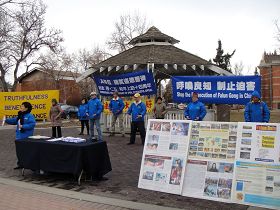 Display boards on Falun Gong and the persecution in China 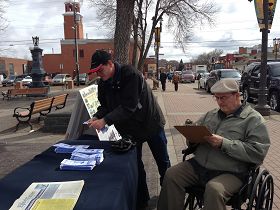 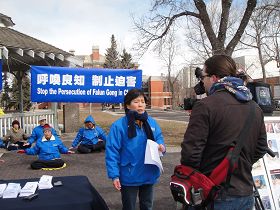 A reporter from a local TV station interviews a practitioner

Two local TV stations sent reporters to cover the event. The organizer of the event, Ms. Chen, briefly reviewed the history of the April 25 appeal. She explained that the persecution has been going on for 14 years. The brutality of the persecution, such as organ harvesting from living Falun Gong practitioners, is unimaginable. Ms. Chen called upon the public to learn more about Falun Gong and the persecution, and to help stop the persecution.

Sixty-seven-year-old Ms. Tang came to Edmonton from China six months ago. In her speech at the rally, she described how she had been detained several times in China and tortured for her belief in Falun Gong. In the detention centers, she witnessed all kinds of tortures that the communist party uses on Falun Gong practitioners.

Local Falun Gong practitioners have been practicing the exercises and distributing flyers every Saturday in this park, making them more well-known and supported by the community. Many people signed the petition during this event. One woman was moved to tears when she heard about the organ harvesting atrocities.

On Saturday, April 27, practitioners will hold another event in Chinatown to help more Chinese people understand the truth about the persecution of Falun Gong.