(Minghui.org) After the Chinese Communist Party (CCP) began persecuting Falun Gong in 1999, the Mudanjiang City Political and Legal Affairs Committee and 610 Office in Heilongjiang Province set up brainwashing centers in several different locations to carry out the Party's directives.

The most recent-established brainwashing facility was on the third floor of a building at the north end of the Aviation Academy. Prior to that, brainwashing sessions were held in several other places, including the second floor of the Qiaobei Detention Center of Indigent Migrants, the Tielinghe Police Academy, and a driving school.

All the facilities were labeled “Re-education Centers,” but their sole purpose was to persecute Falun Gong practitioners, which is downright illegal. 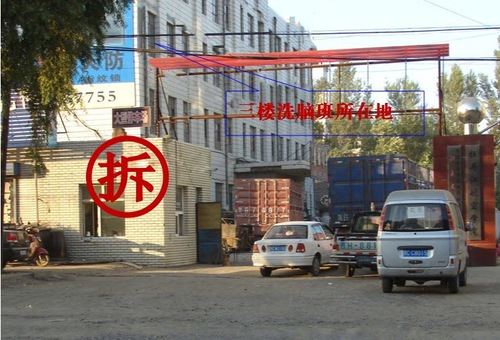 The recently established brainwashing center at the north end of the Aviation Academy on the West 11 th Street was recently demolished in just two days. The Qiaobei Detention Center of Indigent Migrants, a two-story building, was also closed down and replaced by a so-called Assistance Center. The Tielinghe Town Police Academy, another location where brainwashing sessions were held, was replaced with the new Linjiang Residential Area.

Some officers from the Political and Legal Affairs Committee and 610 Office of the Farming Administration of Mudanjiang City recently went to the Hailin Farm to arrest practitioners they had blacklisted. They intended to make them attend brainwashing sessions. Rewards of 20,000 yuan were offered to police officers should they manage to make a Falun Gong practitioner give up the practice. They are paid to persecute people.

Many Practitioners Taken to Brainwashing Center

Many practitioners were arrested during the past six months of this year.

Ms. Li Xuehua from Donghe Village of Xin'an Town, Hailin City, was arrested on September 25, 2013, when she was shopping at a farmers market. The arrests were made by officers from the Domestic Security Division of Hailin City headed by Hu Guiquan and Du Chunhai, chiefs of Xin'an Police Station. Ms. Li was interrogated. Her family went to the police station to ask for her release, but the authorities denied their requests and secretly transferred Ms. Li to the Mudanjiang Brainwashing Center.

Mr. Xu Pengyun from Hailin City was also arrested and held in the Mudanjiang Brainwashing Center.

Several officers broke into Ms. Fu Fengmei's home on September 11, 2013, arrested her, and detained her in a brainwashing center for three days. The officers were Xue Mingxia, deputy chief of the Yangming District Political and Legal Affairs Committee and chief of the 610 Office; the director of the Office of Retired Workers; and the chief of the Sub-district Office of the Second Power Plant, whose names are unknown to us.

Ms. Liu Lilan from Xinzhan Village, Maqiaohe Town, Muling City, Heilongjiang Province, was arrested at her home on August 15, 2013, by Song Jianing, Sun Rongbo, and others officers from the local police station. They ordered her to go with them to have a talk at the local police station, but instead took her to Mudanjiang City. Ms. Liu's husband went to the Mudanjiang Political and Legal Affairs Committee that afternoon to request her release, but the officers told him that she was not there. Ms. Liu later called her husband on her mobile phone, and told him that she was being held in a place like a brainwashing center located in a mountainous region.

Ms. Zhao Fenglan, 67, from Ning'an City was arrested at her home by two police officers at noon on July 5, 2013. According to the locals, she was taken to attend brainwashing sessions.

Mr. Fan Baohe from Fengchan Village, Shiyan Town, Ning'an City, was arrested on July 4. After many inquiries, it was discovered that he had been sent to the Mudanjiang City Brainwashing Center.

Brainwashing centers are a terrible tool used by the CCP in its persecution of Falun Gong. They are not government enterprises. They may look like institutions, but no one is held accountable, no one is in charge. Although a brainwashing center is not a prison, people suffer more there than in prisons. It might be called a school, but no study is done there; people are only made to suffer there. Under the guise of "legal institutions," brainwashing center personnel can arrest anyone without following any legal procedures and with no restrictions on the length of detention. With the absence of surveillance, innocent people are brutally tortured in these facilities.

Even according to the CCP's own laws, the authorities, be they police or “Re-education Center” authorities, have no power to hold a citizen in detention for so many days. Even the police cannot hold a person for more than 24 hours unless they are charged based on the law. In this regard, the Mudanjiang City Political and Legal Affairs Committee and 610 Office have violated the law by illegally detaining Falun Gong practitioners and pressuring them to renounce their faith through coercive measures.