Declarations of Withdrawal from the CCP

Declaration of Withdrawal in Beijing

The Chinese Communist Party (CCP) celebrates its annual “Party Day” on July 1. This year, many people were able to see an announcement posted on a run-down house near the Lishui Bridge in Beijing. The statement reads, “Wang Jiang wants to solemnly announce his withdrawal from the CCP starting today, July 1, 2013.” 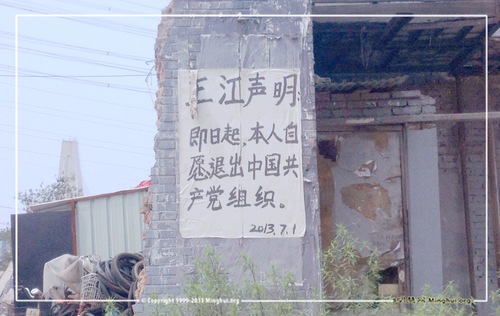 The announcement on a wall near Lishui Bridge in Beijing

The announcement is very visible because it is by an intersection near the bridge. Lishui Bridge is located between the Chaoyang and Changping Districts and traffic is usually busy. In the past, this type of announcement would have been removed immediately. However, it has been up for more than 20 days beginning July 1. It seems that the cleaning person had chosen to not remove it.

This announcement also shows that people no longer have any trust in the Chinese regime since they know the CCP is corrupt and won't change.

My Brother Says, “You Are Not Working as Hard as These People.”

My brother works in Guangzhou City. I recently talked to him over the phone and he sounded quite excited.

He said, “I went to Hong Kong yesterday. I saw many Falun Gong practitioners wearing yellow shirts and carrying signs on the streets. They told us to withdraw from the CCP. It was hot and humid even in the shade, buy the practitioners were still able to remain focused on what they were doing. It was truly amazing!

“If you come to Guangzhou, I can go with you to Hong Kong, so you can see for yourself. As practitioners, they really work harder than you.”

I was moved by what he said. I told him about a march in Hong Kong where people were protesting the Chinese communist regime's interference with practitioners clarifying the truth about Falun Gong. Also that Falun Gong is accepted worldwide. In May of this year, around 8,000 people attended the experience-sharing conference in New York. My brother thought I should have attended the conference, too.

People are witnessing that Falun Dafa is a righteous Fa and that the CCP is evil. I would like to follow practitioners in Hong Kong to save more sentient beings.

A Farmer Says: “I Understand Now.”

A fellow practitioner and I went to a wholesaler in the city several days ago. We met a man in his 30s who was a farmer. I asked if he had heard about the importance of quitting the Chinese Communist Party. He said, “Of course. A Falun Gong practitioner helped me withdraw from both the Youth League and the Young Pioneers. The practitioner also gave me an amulet. After that I always lost money when I played Mahjong. I came to understand that Falun Dafa encourages people to only be good and to not gamble.”

I replied, “Your understanding of Falun Dafa should be commended. It is better to make money by running a business fairly then to gamble to make money.” He replied, “Yes, you are right.”

He also said, “These days, there are so many disasters. Crops on our farm are being destroyed. Life is very difficult and the government doesn't help us.” I told him, “The CCP is inherently evil and its members are atheists. It has caused the death of 80 million people through its 'movements.' It is now focusing on persecuting people who believe in Truthfulness-Compassion-Forbearance. Heaven will no longer tolerate the party. Good days will come after the CCP is disintegrated.”

He nodded in agreement. We then gave him truth-clarification materials to read and to pass on to his friends and relatives. He thanked us.

“Disabled Man Cuffed to Hospital Bed after Being Arrested”