(Minghui.org) Ms. Xu Ying, Ms. Tian Qingling, Ms. Lin Peiyu, and Ms. Wang Dongli were among the Falun Gong practitioners tortured at the Qianjin Forced Labor Camp in Harbin City, Heilongjiang Province. The persecution intensified once they were transferred from Ward No. 1 to Ward No. 2 in late May 2012.

The following is a personal account of Ms. Xu Ying:

We decided to protest against the persecution by refusing to get water. Another practitioner poured a cup of water for us, but captain Zhou Muqi poured it out to prevent us from drinking it.

The next morning, we were not allowed to clean ourselves and brush our teeth, so we decided to go on a hunger strike.

Four days later, we refused to wear the prison uniform. The section manager ordered us to abide by the prison rules, but we refused. That night, the guards separated us and deprived us of sleep.

Tortured on the Iron Chair

I was forced to stand for the entire night. Captain Zhou Lifan and guards Cong Zhili and Li took turns monitoring me. However, I was able to sleep for one hour when Cong Zhili was on duty.

The next day, Ms. Lin Peiyu and I were tied to an iron chair. 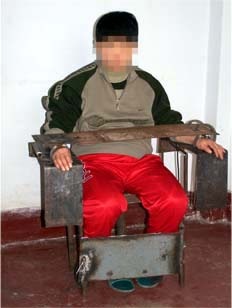 My hands and feet were cuffed to the chair. My body was secured tightly to the chair so that I could not move. When I moved, the handcuffs tightened and injured my wrists.

Zhou Muqi beat me four to five times. She tightened the handcuffs before she began to beat me. Then, she grabbed my hair and slapped my face. I couldn't move throughout the beatings. She hit my face about five times, which resulted in swelling.

Ms. Tian Qingling was put in solitary confinement and force-fed. Ms. Wang Dongli stopped protesting and went back to work in the workshop.

We were also deprived of sleep. Two inmates were assigned to monitor us during the day, and the guards monitored us during the night to prevent us from closing our eyes.

Because the light was dim in my cell, the guards could not see me clearly from the monitoring room. Guards Huo Shuping, Zhou Muqi, and Zhou Lifan set up a bright light that shone directly into my eyes. The minute I closed my eyes, they threatened me.

On the forth day, they threatened to put me in solitary confinement if I didn't comply with them. Because I hadn't slept for four days, I agreed to stop my protest.

Ms. Lin Peiyu refused to comply with the guards' wishes and was held in solitary confinement for another day.

We were still forced to do all kinds of slave labor at the camp.