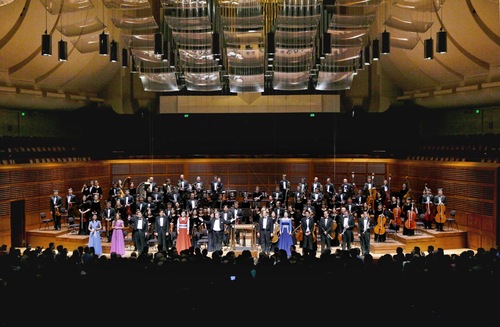 On the night of October 22, 2013, Shen Yun Symphony Orchestra gave the final performance of its 2013 tour at the Davies Symphony Hall in San Francisco.

(Minghui.org) On the night of October 22, 2013, Shen Yun Symphony Orchestra gave the final performance of its 2013 tour at the Davies Symphony Hall in San Francisco.

San Franciscans rewarded the musicians with “Bravo!” and “Encore!” throughout the concert. The onsite dynamic was so fired up that Conductor Leif Sundstrup literally froze the orchestra, took off his tuxedo jacket, then resumed the music during his encore piece.

The sudden “freeze” of the orchestra highlighted the precision of the musicians. The audience was delighted by the Shen Yun musicians' sense of humor, on top of their stellar performance.

Shen Yun musicians are pleased that their music touches people's hearts. The four conductors will continue working together to produce even better music during the 2013 – 2014 Shen Yun Performing Arts tour as well as the concert tour next year.

Chia-Chi Lin, Manager and Concertmaster, shared her experience of the tour: “Audience members stood up and applauded in between the first and the second pieces. They truly liked our music and our performance. We were very touched on the stage because we knew that our music touched their hearts.”

Ms. Lin was also happy that audiences liked the fact that Shen Yun had four conductors, appreciated their different styles and the variety.

In an interview at the airport, one of the conductors, Milen Nachev, recalled his experience: “The audience was so excited. They were screaming, literally, after the end of the concert. Nothing can bring one more satisfaction as a musician, as a human being.”

Conductor Keng-Wei Luo believed that audience loved the Shen Yun music because of its pure sound. He said the four conductors would continue working together to produce even better music during the 2013 – 2014 Shen Yun Performing Arts tour with the dance troupe as well as the concert tour next year.

“Two Worlds Coming Together in Music”

Richard Harrell, professional stage director for the opera, loved the concert: “It was wonderful! Wonderful, wonderful orchestra. Beautiful music and a fantastic range of color, very passionate, and great deal of joy. It was terrific!”

A. Randy Johnson, a San Francisco-based saxophone player, composer, and arranger trained in Classical and Jazz music, enjoyed “the pentatonic feel and a lot of the really quiet, quick tremolos on the violin and cello. Listening to things that are indicative of a different culture, but played on Western instruments—beautiful.”

“It Touched My Soul!”

Russian radio cultural show host Olga Chervyaková said the Shen Yun music gave her hope: “I didn’t grow up with this, so for me it was nice to hear something different. I did not know how to react, but definitely on some of the parts I had tears, and some of the parts of the music I had hope for a better future.”

“I had tears in my eyes when I listened to ‘Divine Compassion’ [the final piece of the concert]. So it was very touching for me.”

She further explained: “I would say it’s more the emotional level and also the spiritual level... Throughout the entire performance, on and off, I had tears in my eyes... It was a wonderful performance. It touched my soul.” 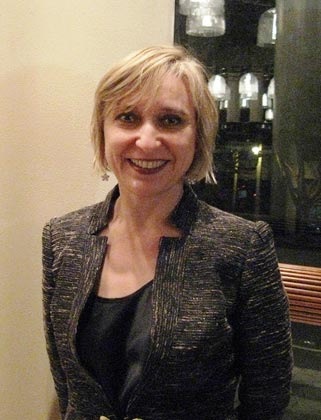 Russian radio cultural show host Olga Chervyaková said that music touched her soul: “Some of the parts I had tears, and some of the parts of the music I had hope for a better future.”

Lee Foster, executive director of Fremont Symphony Orchestra, “I think it's very hopeful. Music draws us together, makes us understand and care about each other more. I think that that is what this means. No boundaries.”

San Francisco composer, musician, and sound healer Steven Halpern is trying to feature Chinese instruments in Western music in his next recordings. He attended the Shen Yun Symphony Orchestra concert on October 22, 2013, hoping to see how a big orchestra would handle that. He thought the concert was “wonderfully performed” and Shen Yun artists were “great musicians.” He said that he had read about ancient Chinese music and traditional philosophy and found them very helpful and inspirational.

He thought more people should come and see the concert. 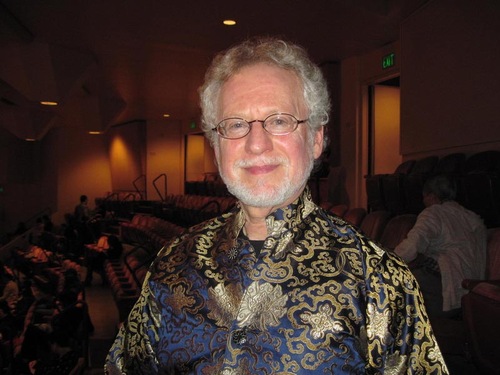 Mr. Richard Harrell was also highly impressed by the talents of Shen Yun musicians. “The talent of so many young performers... They play very difficult music with a lot of demands on them. They do it with a great deal of professionalism and great deal of passion!”

His favorite was the flute duet: “The intervals and the harmonies were amazing, and the ladies were incredibly talented. Their timing and their synchronicity was amazing.”

Ms. Foster took note of the size and the talents of the Orchestra: “It was a such a very large orchestra, and lovely. I counted like 30 violins; there must have been a hundred people on stage, I think there were 30 violins, and almost 30 cellos and basses and then the entire brass and woodwind section, and then you have the Chinese instruments, the pipa and the erhu. It was lovely. And I love the pipa; it is just so beautiful!”

“I enjoyed having multiple conductors. It was more varied... Some of the arrangements were very interesting. I noticed that one of the [four] conductors also arranges. That's fun to hear... ” she added, and “to have the lovely Chinese songs about spirituality in combination with the Beethoven, and the trumpet piece was so much fun; I loved that. It was just a wonderful evening.”