(Minghui.org) “Wherever an abuse of human rights occurs, it should draw the attention of everyone everywhere. I hope you will remind the whole world today at your gathering in front of the Congress that people who follow Truthfulness-Compassion-Forbearance should be respected rather than persecuted… I will use my thumbprint to support Falun Gong and urge colleagues to support them, and will urge the White House and the president, urging they support you as well.” (From a speech given by U. S. Congressman Sam Farr to Falun Gong practitioners from around the world at the “Disintegrate CCP, Stop Persecuting Falun Gong” rally in front of Capitol Hill in Washington, DC, on July 12, 2012). 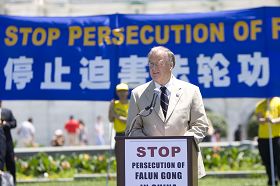 U. S. Congressman Sam Farr, CA, said that the U.S. Capitol is a symbol of freedom to many countries around the world, and “The principles of Falun Gong—Truthfulness-Compassion-Forbearance—these are the principles that are enduring cornerstones of a democratic society.”

Thirteen years ago, on July 20, 1999, the CCP led by Jiang Zemin launched the persecution of hundreds of millions of Falun Gong practitioners who practice Truthfulness-Compassion-Forbearance. Overseas practitioners have continually resisted this persecution by means of peaceful protests ever since. These practitioners, in more than 100 countries, are supported by compassionate people everywhere. The CCP is approaching its end as Chinese people are awakening after learning the truth about the persecution and discerning the difference between righteousness and evil.

Imprisonment, torture, brainwashing, the injection of harmful drugs, organ harvesting from the living, and slaughter—these can destroy people physically and mentally, but they can never change peoples' beliefs or hearts.

300 Signatures: A Symbol of Public Opposition to the Persecution

According to the reports, on the morning of February 25, 2012, police officers ransacked the home of Falun Gong practitioner Mr. Wang Xiaodong in Zhouguantun Village, Botou City, Hebei Province, and arrested him. His elderly parent and young child were left on their own. The 300 households in the village were very angry about this and signed a petition demanding Mr. Wang's release. The village chief even stamped the petition with the official village seal. On May 10, the petition with 300 signatures was taken to the Political Bureau and circulated as internal information, causing serious concern within the bureau.

Later, civilians from different parts of China followed suit and started signing petitions to support Falun Gong practitioners. Several hundred civilians had a confrontation with police officers for nearly two hours on the morning of June 9, 2012, in the Wenxin Garden community in the Kaiping District, Tangshan, Hebei Province, according to Minghui. The civilians stood in a row, forming a human wall, to prevent the police from arresting their hero, Falun Gong practitioner Mr. Li Zhen. Over 70 people signed a petition right there to vouch for Mr. Li Zhen's character.

In another report, 15,000 fellow villagers signed a petition letter to support Ms. Qin Rongqian of Yichun, Heilongjiang. Ms. Qin and her entire family practice Falun Gong. Ms. Qin's father, Mr. Qin Yueming, died from abuse while he was in Jiamusi Prison. Ms. Qin's mother and younger sister were sent to a forced labor camp. These 15,000 fellow villagers were angry and indignant over the tragedy of the Qin family, so they created and signed a petition.

In October of last year, villagers from the Chaoyang District, Liaoning Province, signed a petition demanding the release of their fellow villager Mr. Zhang Guoxiang. They wanted the police to release Mr. Zhang and return the 6,000 yuan that was confiscated.

One Thousand Calls for Justice

Overseas practitioners have been collecting signatures and using other ways to support the persecuted practitioners in China since the persecution began. For example, in Canada, as of May 2011, there were about 500,000 Canadian signatures on a petition asking the government to urge the CCP to stop the persecution of Falun Gong. Prior to the CCP top leaders' visit to Canada in 2005, Falun Gong practitioners submitted nearly 150,000 signed petition letters to the Canadian Prime Minister. Before the 2006 election, the Canadian press reported that, based on the letters the Prime Minster's office received, the Falun Gong issue was one of the top three issues that Canadians were most concerned about.

The Minghui website reported that on the afternoon of July 15, 2012, in order to rescue the illegally detained Taiwan Falun Gong practitioner Mr. Zhong Dingbang in China, practitioners in Taiwan set up table at Chiayi Train Station to collect signatures calling for the Chinese Communist regime to release Mr. Zhong immediately. Within six hours, more than 1,000 people had signed the petition and a yellow ribbon. The yellow ribbon was later hung in front of the Taiwanese Presidential Palace to urge the Taiwanese government to rescue Mr. Zhong. Many Taiwanese elected officials are already stepping forward and leaving their “fingerprints,” calling for the rescue of Mr. Zhong. They have condemned the Chinese Communist regime's illegal arrest and asked for the general public's great concern over this incident. They strongly urged the Taiwanese government to actively rescue Mr. Zhong and protect the personal safety of Taiwanese when they travel to China.

History Is Changing in Front of Our Eyes: 120 Million People Have Quit the CCP

Along with resistance to the persecution on the part of the general public, there is another wave that signals how peoples' minds have changed. Since the Nine Commentaries on the Communist Party was published in 2004, there has been a widespread trend to quit the CCP in China and abroad. More than 120 million members of the CCP and its affiliates (which are for children and teens) have quit and and are no longer members of the Party or its affiliates.

At the DC rally on July 12, Ms. Suzanne Scholte, chairperson of the Defense Forum Foundation, said that she was touched by practitioners' calm and steady resistance in the face of the brutal persecution. The courage and bravery of Falun Gong practitioners has inspired more than a hundred million Chinese people.

In recent months, there has been much turmoil within the Chinese Communist Party. The downfall of Bo Xilai and Chen Guangcheng's fleeing to the United States Embassy triggered a series of events and drew the attention of the international community. Many Chinese people wanted to hear the truth—they sensed the great changes in history happening right before their eyes. Even more people are quitting the Communist Party and its affiliates, the Youth League and the Young Pioneers groups.

In seven years Ms. Zhu, an 80-year-old former CCP member and a Melbourne, Australia, resident, has already persuaded more than 20,000 Chinese people to withdraw from the CCP. She wants Chinese people to renounce the CCP and regain their spiritual freedom. The awakened people are witnessing this historical turning point. They are also seeing the power of truth.

According to the Minghui website, volunteers at the “Quitting the CCP Service Center” at tourist attractions in Europe and Taiwan, within an hour or two often help several dozen tourists from China quit the CCP and its organizations. Many of those tourist groups are organized by CCP officials, who also withdraw. These tourists particularly hope to get factual information on the latest developments in China. The CCP will soon collapse. People are recognizing this fact.

Falun Gong practitioners are gaining glory during difficult times. And during these difficult times, they let more and more Chinese people see hope and a bright future.

“The Atrocities I Endured in Liaoning Women's Prison”