Officers from the Heishan County Police Bureau arrested Ms. Gao, from Heishan County, Jinzhou City, Liaoning Province, on July 1, 2011. Officer Feng Jiang then violently beat Ms. Gao, using the sole of his shoe to continuously hit her head and left temple. He also kicked her left shoulder and arm while cursing at her. He took a break when he got too tired from beating her. Then, he continued to hit her head and kick her legs, left shoulder, and arm. He repeatedly did this for the entire day, and no one stopped him even if they saw what he was doing. 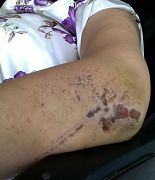 Scars left on Ms. Gao Hongying after she was violently beaten

Ms. Gao was covered with wounds by the time she was sent to Jinzhou Detention Center. There were lumps all over her head, her left eye was black and blue, and her left arm had a dark blue footprint. The police even beat her when she was being examined at Jinzhou Hospital. As a result, her knees were also injured. The police then lied, saying that her wounds were from her falling down. The police did not allow the doctors to examine her wounds.

At Jinzhou Detention Center, Feng Jiang lied again, saying that Ms. Gao got her wounds from falling down. However, Ms. Gao exposed his lies. As a result, Superintendent Zhang refused to accept her. She checked Ms. Gao's wounds and told Feng to take her back to the hospital for another check-up. At the hospital, Feng didn't let the doctor examine Ms. Gao's body, but forced the doctor to write a report according to Feng's words. He then sent Ms. Gao back to the detention center where she was held.

Superintendent Zhang didn't want to take responsibility for Ms. Gao's condition (which was supposed to be the responsibility of the police from Heishan County Police Bureau), so the next day she publicly announced the process of accepting Ms. Gao into the detention center.

At the detention center, Ms. Gao was in severe pain. She also had difficulty walking, had a headache, and lost consciousness several times. Even in her condition, officers from the Heishan County Police Bureau still insisted on transferring her to Masanjia Forced Labor Camp.

On the way to Masanjia Forced Labor Camp, the police covered her head with a black plastic bag. As a result, she lost consciousness and didn't wake up until several days later at the forced labor camp. When the guards saw Ms. Gao's wounds, they took pictures and made videos of them because they didn't want to be held responsible for Ms. Gao's condition.

Ms. Gao showed signs of high blood pressure, a heart attack, and other ailments after being subjected to cruel torture by the officers from Heishan County. Her body below the neck was numb and her feet and legs were swollen and painful. She couldn't walk on her own and had to be supported by two people when going up and down the stairs. She could no longer take care of herself.

Wang Weijing, from the Domestic Security Division at Heishan County Police Bureau, confiscated 15,800 yuan when he searched Ms. Gao's body. The money was from her mother. When Ms. Gao's family and relatives went to ask for the money back, the police refused to return it.