(Minghui.org) On July 20, 2012 the Chinese Communist Party (CCP) launched the brutal persecution of Falun Gong. To mark this date, practitioners in Poland clarified the facts about Falun Gong in three Polish cities for four consecutive days, calling for justice, and protesting the CCP's atrocities. 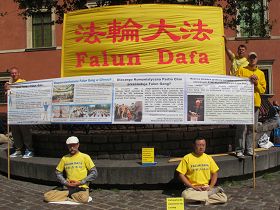 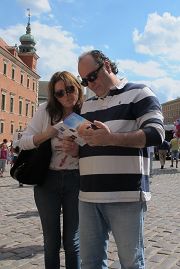 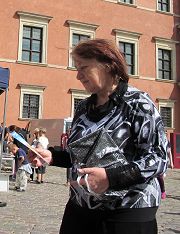 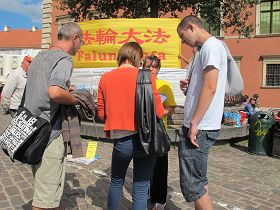 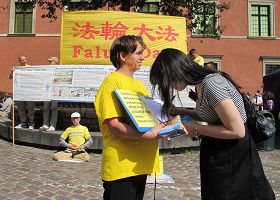 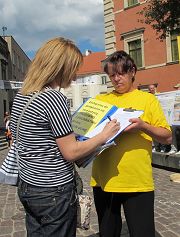 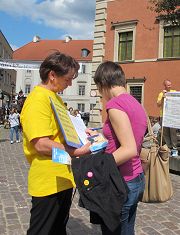 Tourists sign petition to protest the persecution of Falun Gong

On July 19 and 20, Falun Gong practitioners in Poland went to Gorzówwlkp and Zielonagóra in western Poland. Reporters from 5 local media outlets in both cities (TV and radio stations and newspapers) interviewed them.

On July 22, practitioners in Poland held a protest in front of the Chinese embassy in Warsaw to protest the persecution and commemorate fellow practitioners who were tortured to death for maintaining their belief in the principles of Truth-Compassion-Forbearance during the past thirteen years. 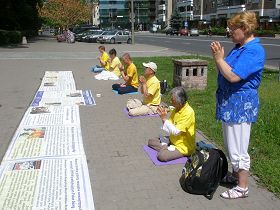 In front of the Chinese Embassy in Warsaw, practitioners protest the CCP’s persecution of Falun Gong. A Polish citizen (right) supports by joining in the protest.

Falun Gong practitioners said that currently in China all media are controlled by the CCP. As a result many Chinese people are misled by the CCP’s defamation of Falun Gong. Practitioners called on local media to provide fair coverage of the persecution.

The CCP’s 13-year bloody persecution of Falun Dafa practitioners, and especially the atrocities of live organ harvesting, shocked the local media. They reported the issue from various perspectives. On some cities’ websites, news was released a few hours after Falun Gong practitioners arrived. The news informed the public of the CCP’s brutal persecution of the people who believed in Truth-Compassion-Forbearance and also called on citizens to participate in the signature collection. Although many people were on vacation in July, Falun Gong practitioners still collected over 400 signatures from both cities.

In Gorzow Wielkopolski, a lady came over to thank the practitioners. She said that last March she made a special trip to Berlin to watch the Shen Yun show after seeing the advertisement in a shop. The experience was marvelous. She said: “What is Truth-Compassion-Forbearance? If you saw the Shen Yun show, you would be able to understand its profound connotations as if you visited a paradise. The CCP persecutes such a wonderful practice. Who is right and who is wrong, we can see clearly. The CCP’s persecution of Falun Gong must be stopped immediately.” She gave her appreciation for the Falun Gong practitioners who posted the Berlin Shen Yun show poster in her city, which allowed her an opportunity to go. 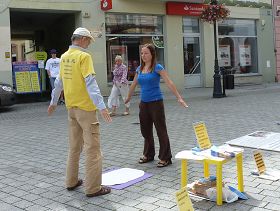 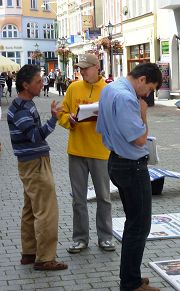 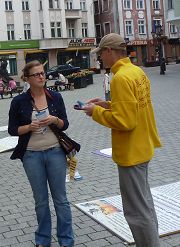 A gentleman who was in line to sign the petition said, "No matter what one’s skin color is, everyone should have the freedom of belief. How can one persecute the other simply due to different beliefs? If you take a look at what the CCP does everywhere, you are able to understand how the CCP persecutes Falun Gong. That is: no matter how cruelly the CCP deals with its own citizens, it does not allow others to say anything. Just like the persecution of Falun Gong, no matter how brutal the persecution is, people just are not allowed to say anything. But, does the CCP have the final say? I just want to sign my name against the persecution, and I believe that people of conscience will all support justice."

In Old Warsaw, a Taiwanese man was very keen on learning more about Falun Dafa after chatting with a Falun Gong practitioner. He bought a set of CDs of Master’s teaching in Guaganzhou, and felt that he should have learned Falun Gong earlier.

Several Chinese visitors saw the Falun Gong banners, and took photos one by one. Then they waved goodbye to the practitioners with a smile.

On July 20, the Poland Falun Dafa Information Center issued a special notice, strongly condemning the CCP for its brutal persecution of Falun Gong for 13 years, and calling on people from all walks of life in Poland to support practitioners and work together to stop the CCP's crimes. The notice was issued by mail to Polish governments at all levels, industrial associations, major media, diplomatic missions and related people, in total over 7,000 copies.