(Minghui.org) It has been 13 years since the Chinese Communist Party (CCP) started the persecution of Falun Gong in 1999, and the number of documented cases of deaths of Falun Gong practitioners as a result of the persecution in China has reached 3,583, as of July 2012. In order to raise awareness about the ongoing brutal persecution, Falun Gong practitioners in Johor Bahru District, Johor, Malaysia gathered in Taman Setia Indah Park at dusk on July 22, 2012 to do the exercises and hold a candlelight vigil in memory of practitioners who have lost their lives for remaining steadfast in their belief in Truthfulness-Compassion-Forbearance. The practitioners also put up many display boards to expose the CCP's atrocities and call for justice.

Practitioners do the exercises in Taman Setia Indah Park in Johor Bahru, Malaysia 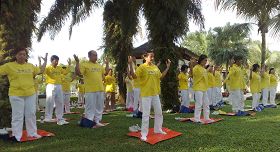 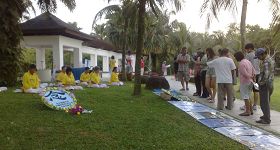 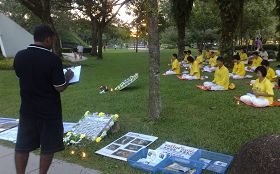 Many passersby were drawn to the solemn activity, and stopped to watch. They attentively viewed displays put up on the lawn and some people inquired more about the details. Many people had heard about Falun Gong before, but did have a good understanding of the truth. When they learned that such a peaceful practice has been brutally persecuted in China, they took initiative to ask for more informational materials and said they would read them carefully and be concerned about this issue.

A middle-aged Chinese man viewed the display attentively, and finally squatted for a long time in front of a display board depicting many practitioners who have died as a result of the persecution. A practitioner walked up to him and told him that it was truly taking place in China. If he wanted to help, he could sign the petition calling for an end to the persecution. This man signed his name right away.

A lady viewed all the display boards and said, “It's really too cruel!” She thought there had been no more killing after Mao Zedong's time in China, but it is still taking place. She hoped the persecution would end soon.

“Russia: Truth-clarification Week in St. Petersburg Calls Attention to the 13 Years of Persecution in China (Photos)”