Ms. Wang Xia from Inner Mongolia Dies after Being Tortured

(Minghui.org) Ms. Wang Xia, from Linhe District, Bayan Nur, Inner Mongolia, was illegally arrested at home at 2:00 a.m. on April 27, 2012, by local 610 Office personnel. On May 12, she was sent to a hospital for emergency treatment for kidney failure. She was later taken back to the detention center. Her family's request that she be released on medical parole was approved; however, He Xige, an officer from the Bayan Nur Domestic Security Team, refused to release her. On June 7, Ms. Wang had a second kidney crisis and failure of other internal organs. She also suffered from a brain hemorrhage and sank into a coma. Two days later, on June 9, the detention center authorities notified her family to come visit her. Ms. Wang died on June 15 at the age of only 38, leaving behind two young children.

According to sources, Ms. Wang was on a hunger strike to protest her illegal detention. The detention center guards ordered several inmates to push Ms. Wang down and brutally force-feed her. One female guard stomped on Ms. Wang's head with her high-heeled shoes, twirling and twisting them. 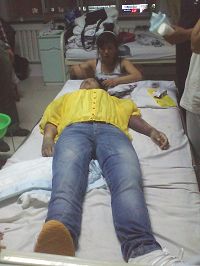 Ms. Wang was born in 1974. Since the Communist regime started suppressing Falun Gong on July 20, 1999, she had been arrested and detained many times due to her belief in Falun Gong.

In November 1999, Ms. Wang was sent to the Inner Mongolia Women's Forced Labor Camp. She was the first Falun Gong practitioner in Inner Mongolia to be sent to a labor camp. She was released on parole in August 2000, when she was 8 months pregnant.

Seven Years of Abuse and Imprisonment

In 2001, Ms. Wang was arrested again and sent to Hohhot Detention Center. She was later sentenced to seven years in prison and sent to the Inner Mongolia No. 1 Women's Prison.

Because she refused to give up her belief, she was tortured, including being beaten, and shocked with electric batons, among other forms of torture.

Ms. Wang held a hunger strike to protest. The prison guards locked her in solitary confinement in a small cell. Tied to a bed for a long time with a feeding tube inserted into her nose, she was unable to move. She held the hunger strike for two years, and the guards force-fed her for two years. She was later sent to a mental hospital where she was abused further and eventually lost her memory.

Ms. Wang was beaten almost every day, adding new bruises to her body even before the old ones healed. The four people who monitored her used inhumane methods to torture her. For instance, they split the handle of a mop into two sticks and wrapped them up with some cloth. Then they used them to beat Ms. Wang. Even more horrific, they thrust the mop handle into her vagina. Once, Ms. Wang did not follow an order, so they grabbed her by the hair and dragged her downstairs from the third floor. They gave her a severe beating in the courtyard. Then they inserted safety pins under her fingernails and heated them with a cigarette lighter. At other times, they would tie her up while they played cards.

During the incarceration, the guards also brought in her father, husband, and children to pressure her into giving up her belief.

By June 2004, Ms. Wang was so emaciated that she was skeletal. She could not move, had no memory and was in a vegetative state. The perpetrators lost patience with Ms. Wang after she refused to give up her belief in Falun Dafa. They yelled, "Let's throw her in the crematory and get rid of her." The head of the 610 Office said, "Her story was published on the Minghui website. We can't let her die in prison. Tell her family to take her home. If she dies there we'll say she committed suicide."

After the prison doctor said Wang Xia would live for only two or three more days, they took her back home on June 29, 2004. On the way home, these guards injected Wang Xia with some unknown drugs. Several hours after she returned home, Ms. Wang was in critical condition. Although emergency treatment revived her, her condition worsened and she constantly drifted in and out of a deep coma.

Ms. Wang Xia before the persecution 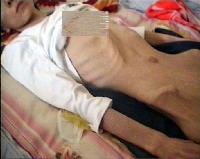 Ms. Wang Xia was abused to the point where she became completely emaciated and near death (July 2004)

She survived miraculously and eventually recovered through her Falun Gong practice. Later on, the officials from the 610 Office in Linhe District took Ms. Wang back to prison again to "serve the rest of the seven-year term." Ms. Wang was released in 2008 after finishing the prison term.

Ms. Wang was arrested again around 2:00 p.m. on March 15, 2011. The police confiscated her family's computer, several Falun Gong books, as well as other personal belongings. Officer He Cai beat her during the process. While interrogating her at Linhe Police Department, officer Niu Xinkuan stomped on her face. He beat her again when taking her to the Hanggin Rear Banner Detention Center. According to insider information, the police used torture to try to extract a confession from her. Officer Chi hit her head violently, causing her severe pain. Her face became swollen and disfigured. Ms. Wang started a hunger strike to protest the torture. She was later transferred to the Linhe District Detention Center.