(Minghui.org) People from all walks of life gathered in Sydney's Chinatown at noon on June 17, 2012, to support 118 million Chinese who have withdrawn from the Chinese Communist Party (CCP) and its affiliated organizations. Participants held a rally and displayed banners and placards with messages such as “Support 118 Million Brave People Who Quit the CCP,” “Love of the Country Does Not Equal Love of the Party” and “Stop Persecuting Falun Gong.” Many passersby stopped to learn about Falun Gong and the ongoing persecution in China. 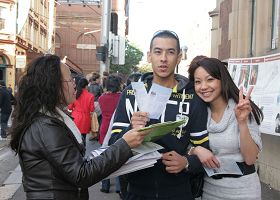 Jamie and Vale Fusico, a local couple, stop to get more information and sign a petition to support Falun Gong. 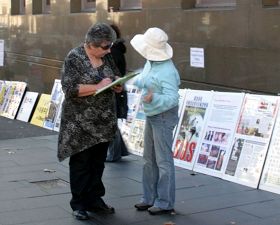 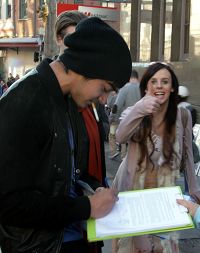 People sign a petition to end the persecution of Falun Gong. 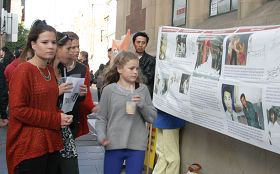 People are shocked to learn about the CCP's brutal persecution of Falun Gong, as they read the information on the banners.

People Call for an End to the Persecution

Falun Gong practitioner Ms. Qu joined the effort to raise people's awareness about the CCP's 13-year-long brutal persecution of Falun Gong by collecting signatures to call for an end to the persecution.

A young couple from Colombia learned the facts and signed the petition. They were shocked that the CCP uses such brutal means to abuse human rights and control people's minds.

Jamie and Vale Fusico, a couple from in Sydney, said that they had learned about the persecution of Falun Gong long ago. They asked for information about the CCP's organ harvesting from living Falun Gong practitioners, so that they could post it on their website and expose this atrocious crime to a larger audience. They hoped that more people would work together to stop the persecution.

More and More People Want to Learn the Facts

An 85-year-old man from Shanghai, China, came to visit relatives in Sydney. He said that he had participated in the Korean War and used to be a government official. He hoped to receive some welfare benefits for his service to his country, but the CCP didn't not provide any. When he and other veterans went to appeal, they were arrested by police. There is no law under the CCP's rule, said the man, adding that he had read the Nine Commentaries on the Communist Party and agreed that the CCP is really as cruel as the book describes. He expressed his wish to withdraw from the CCP and its affiliated organizations at the rally.

A young man from Shenyang, China, had very good academic performance in college, but was deprived of his scholarship because he didn't want to join the CCP. He declared his withdrawal from the CCP's Youth League on the spot.

Ms. Mo, a volunteer for the Quit the CCP Global Service Center, felt that people are gradually becoming more and more aware of the facts about the CCP's corruption and oppression. Many people felt very dissatisfied, and even angry, with the CCP. The number of people who take informational materials and withdraw from the CCP and its affiliated organizations has also been increasing, Ms. Mo noted.

Mr. Cao, another volunteer for the Quit the CCP center, said that during the day's activity, 145 Chinese people quit the CCP and its affiliated organizations. He personally helped to process withdrawals for 89 of them. Mr. Cao has visited Chinatown and tourist sites in Sydney every day for the past 3 years to help Chinese people withdraw from the CCP and related organizations.

“A family of three from Beijing came to register their withdrawals from the CCP organization,” recounted Mr. Cao. “I told them that the Armed Police Hospital sold human organs at the price of one million yuan, and many organs were from Falun Gong practitioners. The father said, 'I believe it; the Armed Police Hospital can do anything despicable.' I feel people have truly been withdrawing from the CCP organizations from their heart. They have clearly understood the CCP's evil nature and corruption from the depth of their hearts.”

Mr. Cao also noted that in Western countries, the greater the power of compassion, the weaker the force of the evil. Many of the people he has helped to quit the CCP in Sydney's Chinatown thanked him. Many expressed strong dissatisfaction with the CCP and its totalitarian rule. Some also condemned the CCP's corruption. Mr. Cao believes that the CCP's collapse is inevitable and just a matter of time.

“Ms. Wang Xia from Inner Mongolia Dies after Being Tortured ”