The Story of a New European Practitioner

(Minghui.org) I am originally from Bulgaria, and currently reside in Germany. When I lived in Bulgaria in 2009, I heard about Falun Dafa for the first time. I had been very interested in Asian cultures and practiced martial arts in high school. Regardless of whatever activities I engaged in or wherever I traveled, however, I had been searching for spiritual answers. 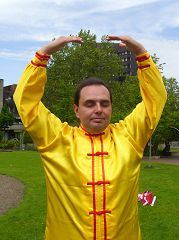 I also learned Chinese medicine. I was told that in Asian culture, medication and medical equipment were not the sole means of treatment; spiritual factors also played important roles. Therefore, I began to be interested in reading books on ancient mysteries, and at the same time, I also read materials that focused on spiritual subjects. However, nothing gave me the answers to the meaning of life. Some of the books that I read carried bad messages, which caused me to have depression.

When I returned home one day, I found a Falun Dafa flyer in my mailbox. I was about to throw it away, but an unknown power stopped me. After reading the flyer, I searched for Falun Dafa on the Internet. I spent hours on the website, and realized that I could not let it go. I was completely empowered by the teachings. Immediately, a brand new world opened up in front of me, and I realized that Falun Dafa was exactly what I had been looking for my whole life.

I still do not know how the flyer ended up in my mailbox, because back then the city that I lived in did not have a single Dafa practitioner. I later learned that everything had been well planned for me.

After reading Zhuan Falun, my depression disappeared, and at the same time, I also graduated from my study of traditional Japanese medicine. At the end of 2009, I came to Dortmund, Germany, and bought additional Falun Gong books. Since coming to Germany, I have read Zhuan Falun more than a dozen times.

In the first few months, I could not find any practitioners; hence I practiced the exercises by myself in a park. In August 2010, I went to the exercise site in Dortmund for the first time. Both the practitioners and exercise site were very tranquil and peaceful. It seemed like the exercise site was a peaceful island located in a bustling ocean. From then on, everything in my life became meaningful and well organized. Things that I had come across before seemed to be a ladder for me to climb up and eventually meet up with Dafa. I also found out that I had so many attachments and all kinds of human sentimentality before cultivating in Dafa. Now that I have found the Great Law or Dafa of the universe, I will follow it to cultivate myself. I am now one of the happiest beings in the universe.

I finally determined in 2010 that a requirement for being a cultivator means I must purify myself at every level. I immediately stopped drinking alcohol and smoking marijuana. I found out afterwards, that as soon as I truly realized that I was a cultivator of the Great Law of the universe, and once I had the desire to let go of bad habits, it was actually not hard to let them go at all. I also often came across conflicts with people, which helped me to improve my xinxing. Living in a complicated environment with conflicts is really very helpful. I saw how I changed into a peaceful island amongst the bustling and noisy ocean. From then on, I did not have any illnesses and my body felt very light. Because there are still many lives out there waiting to know the truth and be saved, I did my best to participate in truth-clarification activities.

I want to share about a car accident that I was involved in. One day in December 2011, while I was crossing a street, a car came speeding toward me. At that moment, some kind of force drew me about two feet backwards, and I could see that the car should have had enough space to stop, but it still hit my knees.

Very quickly I realized what had happened, and my mind was very clear. I was not angry and neither was I afraid; I was actually very calm. People stopped and looked at me. The lady who hit me was panicky and terrified. She sat in her car, unable to gather sufficient energy to come out. She could do nothing more than repeatedly say, “I’m sorry” to me. Smiling at her, I waved and told her that I was fine, and that she should be more careful in the future. After that, I continued on my way.

I checked my knees after I got home and found out that they were not hurt at all. As a matter of fact, my knees did not even have any bruises. People, including my father, told me that I could have asked that lady to pay me one thousand Euros for the accident, but I just laughed at the idea.

There is a lot more that I could write about, but I just want to say that I hope more and more people will be fortunate enough to learn Dafa and genuinely cultivate. I thank Master from the depth of my heart.

“[Selected Submission] My Child Passed Out After Being Trampled On; However He Recovered Seven Days Later”