(Minghui.org) April 25, 2012, marked the 13th anniversary of the peaceful appeal by 10,000 Falun Gong practitioners in China. More than 100 practitioners in Melbourne held up banners on Princes Bridge downtown and held a “Great Wall of Courage” activity to raise people's awareness about Falun Gong and the persecution by the Chinese Communist Party (CCP). They later held a candlelight vigil in front of the Chinese Consulate. 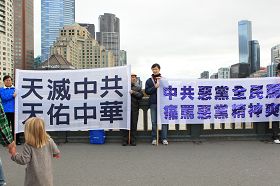 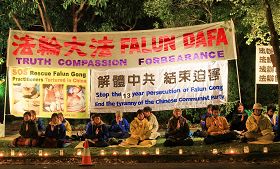 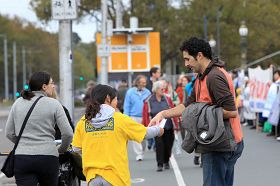 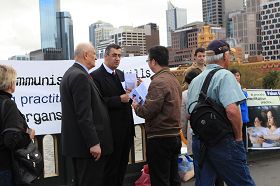 Speaking with people about Falun Gong and the persecution

Mr. Xiao Zhonghua, chairman of the Melbourne Falun Dafa Association, said, “Falun Gong practitioners come here every year to tell people what has happened in China. More and more people have become aware of what Falun Gong is, what the CCP is, the human rights abuses committed by the CCP, and the CCP's crimes against humanity... Both Westerners and Chinese people here have gradually learned the facts, and their support for Falun Gong has become stronger. All this is a result of Falun Gong practitioners' continuous efforts over the past ten plus years.”

Mr. Fan, the organizer of the activity, also said, “After more than ten years, more and more people in Australia have expressed their support for Falun Gong. Australian police show their support for our activities like the one today. They know that Falun Gong's protests are peaceful, so they are very supportive every time we apply for a permit to hold activities.

“Through our years of truth clarification efforts, more and more people have become aware of the truth, and even the Australian government has changed its attitude. We also hope that through such an activity, people will have a clear understanding of the CCP's persecution of Falun Gong.”

Beginning Cultivation Because of the Peaceful April 25 Appeal

The April 25 Appeal demonstrated Falun Gong practitioners' peacefulness, courage, and wisdom. It shocked the whole world at the time, and many people thereafter learned about Falun Gong and began to cultivate. Ms. Luan Shuang from Melbourne was one of them.

“I was working in my company in China at the time and received a document saying that more than 10,000 people had appealed in Beijing. I was shocked, because in Chinese society, no one has such courage. If you go to Beijing to appeal, that means your future, career, and everything may be destroyed. You may even be imprisoned. I wanted to learn why they had sought to petition the government. Later I was told that they practiced Falun Gong. I then wanted to know what Falun Gong was about, what spirit enabled them to do what they did. I heard that someone in my company was a practitioner, so I found him. I read the book Zhuan Falun and was moved in a way that I had never ever experienced before. Many problems and questions I had about life were resolved in this book. So from then on, I started practicing Falun Gong.”

Ms. Jiang and Ms. Wang from Tianjin said, “Today's activity is very meaningful, because it enables more people to become aware of the truth about the April 25 appeal and the brutal suppression of the CCP. We are calling for people to support justice and human rights, so we had to be here, no matter what the weather. Many passersby stopped to observe and take pictures. They will have a correct understanding of Falun Gong.”

Chris Ryan passed by and saw the banners. He told the reporter, “I have learned about the persecution of Falun Gong in China. In my view, everybody should have the freedom of speech and belief. Falun Gong should not be persecuted by the CCP's dictatorial regime. I wonder why the CCP regime takes Falun Gong as a threat. It is strange, because they are only meditating and improving their health. I oppose the totalitarian regime and hope the Chinese people will soon enjoy democracy and freedom.”