(Minghui.org) On April 28, Falun Gong practitioners from Edmonton, Canada, held an activity at the local farmers' market, commemorating the April 25 Appeal, and calling for an end to the persecution of Falun Gong in China. Practitioners held banners that read “Falun Dafa is good,” “Bring the perpetrators to justice” and “Disintegrate the communist tyranny.” They also displayed truth-clarifying materials. 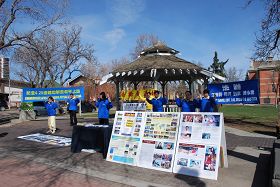 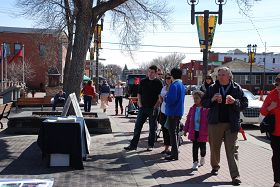 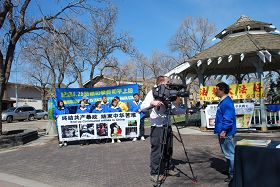 Many people were attracted to the group exercises and the display boards. They asked for details about Falun Gong. Some of them expressed interest in learning the exercises. A gentleman who studies the Chinese economy said that he knew a lot about the Chinese Communist Party. It is dangerous to deal with the party, because they don't obey the rules, he said. He had also heard about the April 25 Appeal, and hoped that the persecution would end soon.

At 12 p.m., the practitioners held a rally. They recalled the April 25 Peaceful Appeal. Mr. Ye, the host of the rally, pointed out that the appeal set up a model for peaceful resistance.

The local branch of the national Global TV station interviewed practitioners and covered the story.