(Minghui.org) This May 13 marks World Falun Dafa Day, and also the 20th anniversary of Falun Dafa's introduction to the public. To celebrate this special occasion, practitioners in Surabaya, Indonesia set up a booth inside a super market to inform the public of the goodness of Falun Dafa and its wide spread around the world. 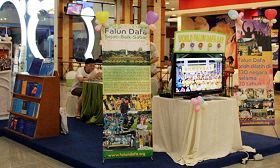 To celebrate the 20th anniversary of Falun Dafa's public introduction, practitioners in Surabaya, Indonesia set up a booth to introduce Falun Dafa

Many people stop to learn about Falun Dafa

Practitioners put a large-screen TV set in the booth to play videos about Falun Dafa's wide spread around the world. Some practitioners demonstrated the exercises nearby, and many people stopped to watch and ask about Falun Gong.

Some people who took flyers asked in detail why the Chinese Communist Party persecutes Falun Gong. They felt it inconceivable after they learned the facts. They also showed their sympathy and support for Falun Gong. Some people wrote down the address of practice sites, and wanted to learn Falun Gong. Others took the flyers and then contacted local coordinators to learn more about Falun Gong.