(Minghui.org) To commemorate the 20th anniversary of Falun Dafa’s introduction to the public, Falun Gong practitioners in Turkey held activities on May 6, 2012 at Yesilkoy Beach in the city of Istanbul to introduce Falun Gong and expose the Chinese Communist Party's (CCP) atrocities while persecuting Falun Gong. 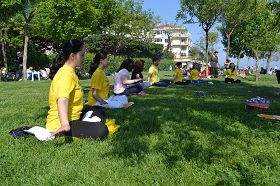 Practitioners in Turkey demonstrate the exercises 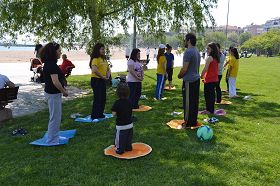 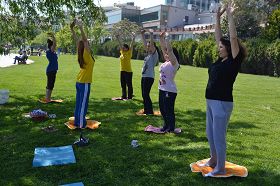 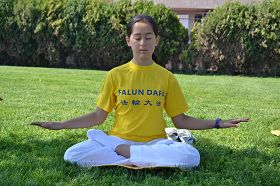 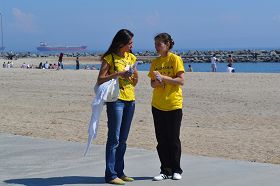 A practitioner speaks with a passerby about Falun Gong 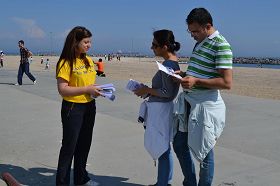 A practitioner speaks with people about Falun Gong 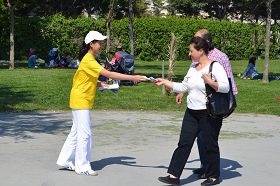 A practitioner hands out flyers to people

May in Istanbul is sunny and pleasant, the season most suitable for outdoor activities. It was a weekend in which a constant stream of people came with their families to the seaside for recreation.

Close to the entrance to the beach, a group of Falun Gong practitioners dressed in yellow T-shirts attracted the attention of many visitors. The practitioners demonstrated the five sets of Falun Gong exercises accompanied by peaceful music. Many visitors stopped to watch. Some with a strong interest learned the exercises on the spot. Others asked for the address of the local practice site, saying they would like to practice Falun Gong.

During the event, which lasted from noon till 7 p.m., practitioners distributed a large amount of truth clarification leaflets to raise people's awareness about the CCP's crime of persecuting Falun Gong, talked to people about Falun Gong, and the inhuman persecution Falun Gong has suffered for 13 years in China.

Having learned the truth, a lot of people expressed support and appreciation for Falun Gong practitioners and condemned the CCP’s atrocities. Many people said that the CCP’s persecution of Falun Gong must be stopped as soon as possible.