(Clearwisdom.net) A coworker who had recently taken a trip to Bali Island came to my office not long ago and showed the pictures she took there. Everyone was impressed by the beautiful scenes. She went through the pictures on the computer monitor. All of sudden the screen displayed a large banner with five golden Chinese words—“Falun Dafa is good.” 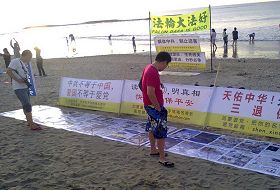 The truth-clarifying display boards in Bali

Everyone was stunned when they saw that picture. My coworker told us that this was the only Chinese to be seen on Bali. After she left, one of my officemates asked me, “Why is Falun Gong not suppressed in other countries and practitioners can hang up their banners in public?” I responded, “Why would they suppress Falun Gong? Falun Gong has been embraced around the world and has been recognized with many proclamations. Only the Chinese Communist Party, an evil party, attacks Falun Gong. Chinese people have really been brainwashed by the Party, and they think that Falun Gong is also suppressed in other countries. The communist party will collapse.” He agreed.

I thank the practitioners overseas for your efforts to clarify the truth.