(Minghui.org) The Falun Dafa Club of Columbia University held a four-day exhibition on campus from Oct. 15 to Oct. 18, 2012, exposing the Chinese Communist Party's (CCP) crime of harvesting organs from Falun Gong prisoners of conscience. Faculty, students and visiting scholars viewed the exhibition and signed to condemn to the CCP's atrocities. 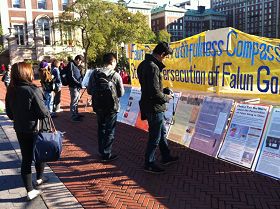 The topics of this exhibition included “What is Falun Gong?” “The CCP's Lies,” and “Persecution Extended Overseas.” It was the first time the crime of organ harvesting was included in the exhibition at Columbia University. Faculty, staff and students showed their support for Falun Gong by signing to call for an end to the persecution. Some invited more people to the exhibition to sign. A professor thanked Falun Gong practitioners and sincerely hoped the persecution would end soon.

A Chinese scholar was interested in seeing evidence from independent investigations on organ harvesting. A Falun Gong practitioner introduced the independent investigation by Canadian lawyers and their book Bloody Harvest. After looking through the materials briefly, she thought the evidence was very convincing. She said this crime was intolerable.

An elderly Chinese lady took her son and granddaughter to see the exhibition. A Falun Gong practitioner told them about the self-immolation hoax on Tiananmen Square. When talking about the discrepancies in the CCP's news broadcasts and how one of the so-called victims was shown on video with her body wrapped tightly in a hospital, the lady's son nodded repeatedly. Pointing at his own face, he said his face was once burned. It was against common sense to wrap up burn injuries. The CCP's attempt to deceive the public was quite clumsy.

Many tourists from Mainland China were surprised to see a Falun Gong exhibition at Columbia University and took pictures in front of the display boards. A Chinese tourist stopped to talk to Falun Gong practitioners. He said he had read the Nine Commentaries on the Communist Party. “The party is doomed. It is just a matter of time before it collapses,” he said. 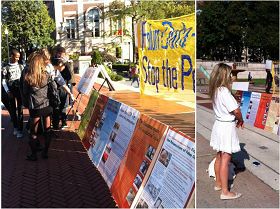 Many people wanted to learn more about Falun Gong and asked how they could learn the exercises. A Chinese student who came from Europe helped set up the display and asked the practitioners to teach him the exercise movements.

“Villagers in Qingyuan County Sign a Petition to Demand the Release of Ms. Liu Liying”