Villagers in Qingyuan County Sign a Petition to Demand the Release of Ms. Liu Liying

(Minghui.org) On September 25, a small van appeared at the downstairs of a building where Falun Gong practitioner Ms. Liu Liying lives. The vehicle identification plate was covered up. Seven to eight police officers in plainclothes hid at the building exit. At 6:40 a.m., police broke into Ms. Liu's home and arrested her and her husband. They took away about 110,000 yuan of cash, a bank card which had about 160,000 yuan for their planned grain shop and for supporting their two college children. The police also took more than forty cell phones [used to inform people about the persecution], one computer, one printer, and some forty books.

After Ms. Liu was arrested, villagers demanded her release and the return of all seized personal belongings. The following are the signatures and fingerprints of the villagers: 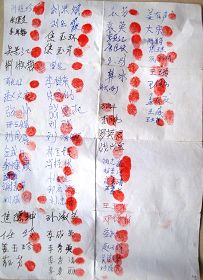 Ms. Liu suffered from serious illnesses before she started practicing Falun Gong. After practicing Falun Gong, all her illnesses disappeared and she became very healthy. Her husband went out of town on business a lot, hence she had to do all the household chores. She took care of their children and her mother-in-law. She often helped her relatives and friends. People all said she was a good person.

On the morning of September 25, 2012, twenty Falun Gong practitioners in Qingyuan County, Fushun City were arrested and detained. When the police broke into their homes, they asked for their names and put handcuffs on them. The police confiscated their personal belongings and bank passbooks. If practitioners did not open the door, the police would pry open the door to enter the house and arrest them. The police threatened to shoot if they ran. They also detained friends and relatives who happened to stop by. Falun Gong practitioners known to have been arrested are: Liu Liying, Jiang Yan, Wang Fajun, Jia Yunlong, Liu Haitao, Liu Weibin, Li Wensong, Liu Yulan, Li Hengliang, Hu Fengju, Zhang Guangying, Gai Yongjie, Liu Yingjie, Dong Zhuangnan, and Fu Wenquan. It is learned that this operation was called F08, an ad hoc operation, which was led by deputy director of the Public Security Bureau, Yang, and was deployed by Gao Bing. Before 3 a.m. that day, all police officers involved met at the Fushun City Public Security Bureau. They were required to bring pistols, handcuffs, belts, towels, and cameras. No police cars were used. They dressed in casual clothes. They pre-arranged the arrest of those 16 people. About forty to fifty police officers were involved in this operation.

Ms. Liu's husband had just returned home from an out of town trip when the police came. They handcuffed him and arrested him. When he was released later, his hands were swollen. When neighbors witnessed the brutal arrests and looting, they said, “What kind of society is this? They don't let people be good people and arrest them. The Communist Party is really bad.”

The primary duty of the police is to protect citizens and punish bad people. Those police officers followed the CCP's instructions and various excuses to persecute good people. Their misdeeds in Fushun is an open violation of the law and is the cause of social unrest. Only the CCP regime will have such things happen. Qingyuan citizens once again witnessed the CCP evil conduits undermine the law.