(Minghui.org) More and more evidence has emerged recently regarding the Chinese Communist Party's (CCP) organ harvesting from living Falun Gong practitioners. On October 26 and 27, Falun Gong practitioners from Toronto held an event in Chinatown, exposing the crime and urging Chinese people to quit the CCP and its affiliated organizations. 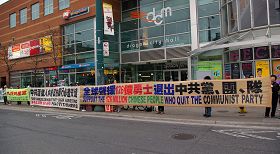 Ms. Zhang, a volunteer at the Service Center for Quitting the Party in Toronto, said, “Many Chinese people were shocked by the organ harvesting. I've talked to Chinese students at the University of Toronto. Many of them asked me about the organ harvesting. Some students quit the party after they learned the truth of the persecution [of Falun Gong].

At the Chinatown event, about 20 people quit the CCP after talking to practitioners. A Canadian woman took a lot photos of the event and encouraged practitioners to keep up the good work.

A Chinese immigrant, who didn't want to reveal her name, told a reporter from The Epoch Times that she witnessed the persecution of Falun Gong in a prison in Liaoning Province. “I saw a husband and a wife, who both are Falun Gong practitioners, arrested with another two practitioners. They were supposed to have a trial together. However, at the court, I only saw three. The husband had disappeared. Even his wife didn't know where he was.” The woman continued, “Now I realize that he was probably killed for his organs. It happened right after they were sent for a physical examination.

“I also know a few cases of organ harvesting from death-penalty prisoners. A 40-some-year-old guy was sentenced to death. Before the execution, he expressed that he would like to donate his organs, and gain a few thousand yuan in return for his family. But his request was rejected by the prison. The prison wants to harvest his organ for profit, so they rejected the donation.” She added, “The family of the death row prisoners would not know anything. After the execution, the corpse is not given to the family. If you want the ashes back, you also have to pay.” This woman has renounced her CCP membership.

Ms. Zhang from the Service Center for Quitting the Party said that she once met a Chinese man in front of the Chinese Consulate in Toronto. This gentleman used to work in a court in China. He also knew something about organ harvesting. He told her how the officers at the court and the labor camp collude to acquire organs from prisoners for money.

The brutal persecution is still going on in China. Ms. Wang, a local practitioner, said that her friend, a practitioner in Changchun, China, was arrested recently along with ten fellow practitioners. Several practitioners at the event told of their own experiences of being tortured in Chinese prisons.