(Minghui.org) Currently over 100 Falun Gong practitioners are illegally detained in Masanjia Women's Forced Labor Camp. Deputy superintendent Zhang Jun, team leader Zhang Huan, instructor Zhang Zhuohui, and team leaders Zhang Lei and Zhang Xiurong often beat them. They will slap their faces, pull their hair, and slam their heads against the wall. Ms. Li Chunhong refused to sign on a “test” paper, so Zhang Zhuohui called her into her office, where she pulled her hair, slapped her in the face and then repeatedly kicked her. Then she proceeded to blame Ms. Li for ruining her shoes. 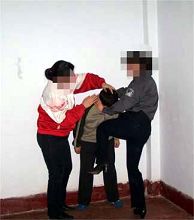 Team leaders for newcomers are Zhang Lili, Yu Xiaochuan, Li Dan, Shi Haiyan and Guo. Zhang Lei always beats practitioners with a stick or a wooden board near their eyes, making them swollen and bruised. She did this to Ms. Wang Yonghua, Ms. Li Jing, and Ms. Song Guangdi. Ms. Song's eyeballs were terribly swollen.

Ms. Zhang Shuxia from Kaiyuan and other practitioners were tortured with a tactic that originated in Masanjia known as stretching. The victim stands between two beds with arms stretched to the extreme and is then handcuffed in this position. If she refuses to give up her belief, she won't be released until she is near death. Another stretching torture keeps the victim from being able to squat or stand, while her hands are pulled apart to the extreme by the beds. Ms. Zhang Juxiang was tortured like this until she was mentally disordered. There are many monitors in the camp 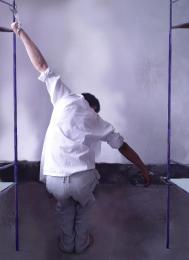 Ms. Wan Xiaohui, 57, from Dalian was arrested on July 17, and detained in Yaojia Detention Center by the Ganjingzi Police Station and Hongqi Police Station. At the end of August, she was sent to Masanjia Forced Labor Camp. This was the second time that she was detained in Masanjia, where her leg was fractured.

Zhang Lili is in charge of newcomers. She said no one was really aware of how someone could die in in Masanjia. Zhang Jun also said, "We know someone is truly insane here if we see them eat feces."

Every detainee here, practitioners or not, are strictly limited in their use of the restroom. Urinating and defecating is to be done at separate times. If anyone cannot finish in time, she is punished. While walking to the dining hall they had to count out loud. If the guards could not hear them, they were physically punished, and then not allowed to go to sleep until midnight.

In Masanjia, there were always tests and assigned homework. The test questions all denounce Dafa. Every test is to check on their brainwashing. The team leaders tell the prisoner before the test that they need only write down what they are thinking. That is a lie, because when practitioners Ms. Wang Yonghua and Ms. Wang Jing wrote down their true feelings, they were called out to be beaten and tortured, and their terms were extended.

Before any prisoner is released, Masanjia will bring someone in to investigate and ask every practitioner if she has been beaten or mistreated and then sign a form. Beforehand, the team leader will threaten her that if she tells the truth, she will not be released. It is common to not be released on time, and no special procedures are necessary.

The new superintendent of Masanjia is an elderly man named Yang, after Wang Naimin retired.